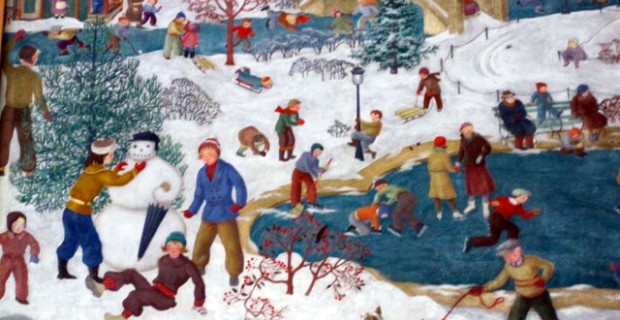 A historic mural dating from 1937 was removed from a middle school in Chicago because it only showed white children and failed to reflect the school’s modern day “diversity”.

The mural was taken down at Percy Julian Middle School in Oak Park after the school’s “Social Justice Club” and “Diversity Committee” complained that it was upsetting to students of color.

“I have had students approach me pointing out that this picture does not represent our student body or the diversity of Oak Park,” Principal Todd Fitzgerald wrote in an email to staff.

The mural – entitled ‘Child and Sports–Winter’ was originally painted by Ethel Spears and was previously displayed in Lowell Elementary.

“This mural made students feel invisible because it doesn’t reflect the current student body,” Brito Millan said. “How can a student learn in a healthy environment when they don’t feel they are being seen?”

However, David Sokol, a retired professor of American art history at the University of Illinois at Chicago, described the removal of the painting as a “modern-day book burning.”

“There is nothing offensive with the mural; it just shows all white kids playing,” said Sokol. “Just because it doesn’t have any black kids, doesn’t make it offensive. It doesn’t display any stereotypes at all. That’s how Oak Park looked back then. You can’t erase history.”

Barbara Bernstein, a founder of the New Deal Art Registry, agreed, commenting, “I think it does a real disservice to remove a piece of historical work,” said Bernstein. “Not everything in your environment is going to be a perfect reflection of you.”