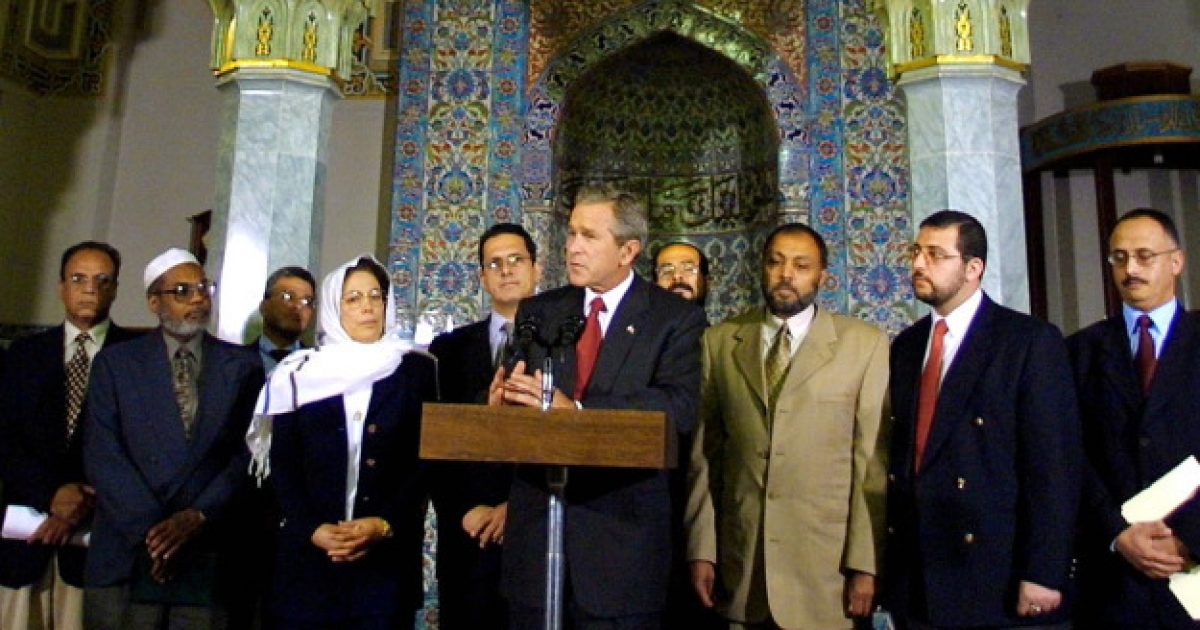 mostly chronologically, starting with Muhammad’s conquests in Arabia and moving forward. It’s a bloody history, and one indelible impression one gets from proceeding through the centuries of jihad warfare is of the persistence of the jihadis. They never give up, they never give in, and they never take any setback, no matter how devastating, as decisive. They keep coming, and have kept coming at non-Muslims, from Spain to India and elsewhere, as I show in the book, without respite, without reprieve, without reform.

The last chapter of The History of Jihad From Muhammad to ISIS deals with jihad in the twenty-first century, and opens with 9/11. After having written the story of nearly fourteen hundred years of relentless jihad warfare, George W. Bush’s “Islam is peace” speech at the Islamic Center of Washington, D.C. six days after 9/11 jolted me as it never had previously. Reading Bush’s speech after going through the details of fourteen centuries of jihad against non-Muslims made the speech appear much more startlingly fatuous and self-defeating than it already had even to me. Bush’s suicidal willful ignorance, coming after so much jihad warfare, so many ruined lives, so much bloodshed — it hit me with a wallop.

This book establishes definitively why the West’s entire approach to the global jihad threat since 9/11 has been so wrongheaded and is leading us to political, cultural, and societal disaster. I’ve been trying to sound the alarm on this for many years now, while the moneyed forces of the “Islamophobia” hysteria industry have won the day and marginalized those of us who have been telling the truth about what is happening. The History of Jihad From Muhammad to ISIS is my last effort to try to show people the nature and magnitude of the threat we face. Bush’s speech is just one of many missteps and mistakes made by leaders throughout history when faced with the jihad force. My hope is that if this history is more widely known, and those missteps and mistakes highlighted and explained, maybe some people will wake up to what is happening before it is too late.

Preorder The History of Jihad From Muhammad to ISIS here now.

On September 17, 2001, U.S. President George W. Bush appeared at the Islamic Center of Washington, D.C., in the company of several prominent Muslim leaders, and said:

These acts of violence against innocents violate the fundamental tenets of the Islamic faith. And it’s important for my fellow Americans to understand that.

The English translation is not as eloquent as the original Arabic, but let me quote from the Koran, itself: In the long run, evil in the extreme will be the end of those who do evil. For that they rejected the signs of Allah and held them up to ridicule.

The face of terror is not the true faith of Islam. That’s not what Islam is all about. Islam is peace. These terrorists don’t represent peace. They represent evil and war.

As Americans still searched the smoking ruins of the World Trade Center for the remains of their loved ones, President Bush cautioned Americans against thinking ill of Muslims, as if the 9/11 attacks had been perpetrated by Americans targeting Muslims:

America counts millions of Muslims amongst our citizens, and Muslims make an incredibly valuable contribution to our country. Muslims are doctors, lawyers, law professors, members of the military, entrepreneurs, shopkeepers, moms and dads. And they need to be treated with respect. In our anger and emotion, our fellow Americans must treat each other with respect.

Those who feel like they can intimidate our fellow citizens to take out their anger don’t represent the best of America, they represent the worst of humankind, and they should be ashamed of that kind of behavior.

This is a great country. It’s a great country because we share the same values of respect and dignity and human worth. And it is my honor to be meeting with leaders who feel just the same way I do. They’re outraged, they’re sad. They love America just as much as I do.

Muslims were not being subjected to wholesale vigilante attacks in the United States, at that time or at any point subsequently. This speech was an exercise in vassalage that would have made the late-fourteenth- and early-fifteenth-century Byzantine emperors ashamed, yet Bush was by no means alone. Political leaders all over the West echoed his words about Islam’s being a religion of peace, having nothing to do with terrorism. After September 11, this became a commonplace of the Western political discourse, rejected only by a small minority, who were quickly stigmatized as cranks.

All these years later, it is clear: Bush’s speech set the pattern. After every jihad attack, non-Muslim leaders have followed his example, making it their highest priority to affirm that Islam is peace and that Muslims are victims. Bush deformed the West’s response to the resurgent jihad, and poisoned the public discourse so that attempts to discuss this problem honestly are consigned to the realms of “Islamophobia” and condemned by all right-thinking people.

This could be Bush’s most enduring, and most damaging, legacy. Order The History of Jihad From Muhammad to ISIS here now.