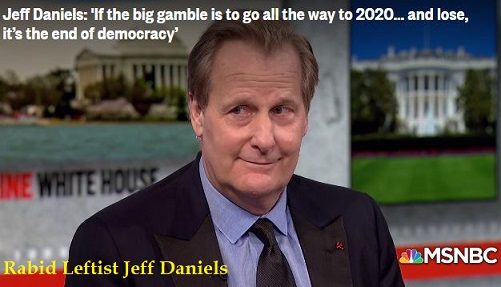 One of my all-time favorite movies is the 1996 Fly Away Home, about a 13-year-old girl, played by Anna Paquin, who raised a flock of orphaned wild Canadian Geese and, solo-flying an ultralight aircraft, led them thousands of miles south to their winter home in a bird sanctuary in North Caroline. Jeff Daniels, 64, played the girl’s dad.

Daniels, alas, is a hateful rabid leftist who is devoid of reason and prone to hysteria.

Currently acting in To Kill a Mockingbird on Broadway, Daniels has confused fiction for reality, seeing himself as the noble but fictional Atticus Finch when he actually more resembles the idiot he portrayed in the two Dumb and Dumbermovies.

As reported by Erik Pedersen for Deadline, during an appearance yesterday, May 20, on far-left network MSNBC, Daniels painted supporters of President Donald Trump and a “wing” of the Republican Party as white-supremacist racists. He also hyperventilated that the re-election of President Trump would be “the end of democracy.”

Daniels said. “And I think there are people in the Midwest, between the coasts…who have to make a decision now. You have to decide whether, like Atticus, you believe that there is still compassion, decency, civility, respect for others — ‘do unto others,’ remember that? — all that stuff you guys believe in, and you still voted not for Hillary or for Trump. Where are you now? If the big gamble is to go all the way to November 2020 … and lose, that’s the end of democracy.”

The topic then turned to race in America. Quoting a line from the play, Daniels said, “A mob is a place where people go to take a break from their conscience. … That’s what I see when I look at Donald Trump’s rallies, that’s when I see the lies he’s spewing at these people, and people going, ‘I gotta believe in something,’ and he said he’d bring my manufacturing job back and she didn’t, and I’m all in.’ But … at the end of the day, it’s race. It’s race. This is about the Republican Party — or a wing of it — going: ‘This is our last chance to save the party. And if we don’t, it’s the end of the Republican Party.’ And the only way they can do that was to tap the race button and say, ‘Go ahead, it’s OK.’ And [Trump] did. And they did. That was the only card they had left to play, and they played it. And they aren’t going to go quietly.”

He added: “I need people to stand up and be heroic. Because democracy is at stake.”

You can hear him hyperventilate for yourself by going to Deadline for the video.

The Deadline article received 8 comments. Below are the comments critical of Daniels; they are a hoot:

“Translation: if we don’t get our way it’s not democracy. Boo hoo.”

“Such an uncharacteristically even handed, unemotional response from an actor.”

“Will Jeffy promise to move to Canada if Trump wins again? Pretty please!”