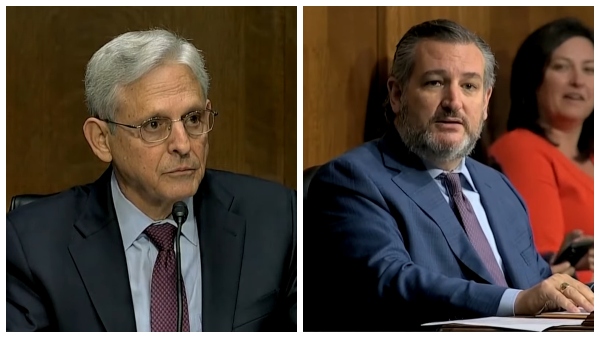 It now appears that Merrick Garland lied his backside off.

Under questioning from Sen. Ted Cruz (R-Texas), Garland was asked to respond to concerns about “a memo to the FBI saying go investigate parents as domestic terrorists.”

“That is not what the memo says at all,” Garland replied. “I don’t care what the letter [from the national school boards association] says–”

“You don’t care?” Cruz interjected. “You said it was the basis of your memo… Now you don’t care about the letter?”

“And that is wrong,” Garland noted. “The memo has nothing to do with partisan politics.”

In recent days, Rep. Jim Jordan (R-Ohio), the ranking member of the House Judiciary Committee, pressed Garland to rescind the controversial memo, which he issued after the National School Boards Association pressed Biden to task federal law enforcement with looking into whether parents protesting critical race theory and other inappropriate materials at school board meetings amounted to “domestic terrorism.”

“We want the memo rescinded,” Jordan told the Washington Examiner in a recent interview. “I think the only appropriate thing, the only fair thing, the only smart thing, the only logical thing, whatever words you want, is for Merrick Garland to say, ‘We are not charging these 94 U.S. attorney districts and the U.S. attorneys to work with law enforcement there to set up these dedicated lines of threat reporting’ — these snitch lines.”

“So, rescind that. Stop that. That is so authoritarian, big government — coming down on parents, moms, and dads — it’s just ridiculous and wrong,” Jordan said.

It turns out that Jordan had every reason to be concerned.

On Tuesday, the House Judiciary GOP released a letter Jordan sent to Garland alerting him to a document he and his fellow Republican members obtained from a whistleblower indicating that the DOJ’s counterterrorism division has established a classification reporting system for parents who go to complain at school board meetings.

Under the threat tag “EDUOFFICIALS,” the document from the FBI’s Criminal Investigative Division and Counterterrorism Division states that officials want the 93 U.S. attorney’s offices to apply the classification “to investigations and assessments of threats directed specifically against school board administrators, board members, teachers and staff.” In addition, the memo states that the classification is necessary in order to “help scope this threat on a national level” to help coordinate with “law enforcement partners at all levels.”

Specifically, the memo asks the U.S. attorney’s offices to “identify the following”:

— “Are there potential federal violations that can be investigated and charged?”

— “What’s the motivation behind the criminal activity?”

This memo, make no mistake, directly contradicts what Garland told Congress under oath, meaning he likely committed a felony during his testimony. But worse, it also means that the Justice Department under the increasingly authoritarian Biden regime is now being used as a political weapon against parents whose only ‘crime’ is showing up to school board meetings and taking social and cultural positions that the left-wing deep state doesn’t like.

“We have now received a disclosure from a Department whistleblower that calls into question the accuracy and completeness of your testimony,” Jordan wrote in a letter to Garland.

In other words, Garland lied.

Our government is completely rogue when it seeks to punish parents who are trying to defend their children from divisiveness, Marxism and filth.