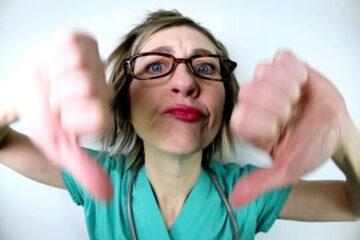 This is what happens when tyrannical governments are not held in check, and furthermore, when fascist businesses are continued to be patronized. A while back, 22,000 nurses refused unlawful mandatory vaccinations and refused to back down. In the city of Houston, Texas, 150 nurses were fired after they refused the deadly experimental injections President Donald Trump unconstitutionally paid for with your money and is now being mandated. Now, the city has created its own crisis due to a shortage of nurses.

Jon Miltimore at Foundation for Economic Education has the story.

Jennifer Bridges knew what was coming when her director at Houston Methodist hospital called her up in June to inquire about her vaccination status.

Bridges, a 39-year-old registered nurse, responded “absolutely not” when asked if she was vaccinated or had made an effort to get vaccinated. She was terminated on the spot.

Bridges was one of more than 150 hospital workers fired by Houston Methodist hospital.

“All last year, through the COVID pandemic, we came to work and did our jobs,” said Kara Shepherd, a labor and delivery nurse who joined Bridges and other workers in an unsuccessful lawsuit. “We did what we were asked. This year, we’re basically told we’re disposable.”

Shepherd and her colleagues may be disposable in the eyes of hospital administrators, but they are perhaps not as easily replaced as she or Houston Methodist thought.

Two months after firing unvaccinated hospital staff, Houston Methodist is one of several area hospitals experiencing a severe shortage of medical personnel. Media reports say hospitals have “reached a breaking point” because of a flood of COVID-19 cases.

In an editorial published Tuesday, the Houston Chronicle said the 25-county hospital area that includes Houston had more patients in hospital beds—more than 2,700—than at any point in 2021. News reports make it clear that hospitals are struggling to keep up.

The Right To Bodily Integrity: Nobody Wins And We All Lose In The COVID-19 Showdown

When hospital administrators set their policy—get vaccinated or lose your job—their goal was to increase vaccination rates of hospital staff. The unintended consequence was a shortage of nurses and other hospital workers during a deadly pandemic.

In June, Houston Methodist’s president, Marc Boom, sounded confident that his coercive methods were effective, noting that almost 25,000 of the health system’s 26,000 workers were fully vaccinated.

“The science proves that the vaccines are not only safe but necessary if we are going to turn the corner against COVID-19,” Boom told employees in a statement.

Other Houston hospitals saw things differently. Two months before Houston Methodist fired its workers, Harris Health System officials announced they would not be requiring hospital workers to get vaccinated, noting none of the vaccines were fully approved by the FDA.

Americans will of course disagree about which CEO’s approach was the correct one. The pandemic, after all, has been bitterly divisive because we’re deeply divided over this very question: should coercive means be employed to achieve certain desired healthcare outcomes, and if so, to what extent?

In 2020, political leaders around the world said yes to this question, and the results were disastrous. A year later, private companies are playing a different version of the same game: take the vaccine, or get fired.

Like the lockdown champions of 2020, corporate leaders no doubt believe their action is moral, proper, and will achieve their desired result. But as the Cobra Effect reminds us, focusing strictly on desired outcomes and ignoring potential unintended outcomes is a good way to get bit.

Clearly, Governor Greg Abbott should be bringing these hospitals to justice for mandating an experimental injection in clear violation of the Nuremberg Code, but he isn’t doing that. He’s too busy propagating the CONvid-1984 lie after he allegedly was “fully vaccinated” only to take the fraudulent PCR test and be deemed as having COVID. You can’t make this stuff up and until the People rise up and bring the law to bear upon these criminals in government and in Big Business nothing is going to change.