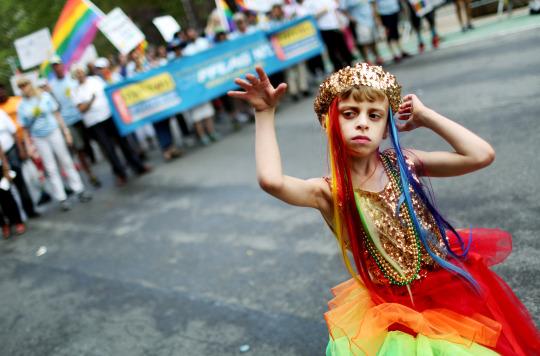 Ever since the idea of gay rights was widely accepted, the cultural transformation has rapidly been at hand. The results are not pretty. Child drag queens have been unveiled to sexualize kids and are being used as mascots for indoctrinating the new generation into this depraved lifestyle.

Homosexual drag performer “Bella Noche” had one of the most prominent child drag queens, “Desmond is Amazing” on a Facebook livestream last week. The results were very troubling to anyone who cares about the welfare of children. Watch at your own risk:

The most startling part of the video came when “Bella Noche” referenced ketamine – cat tranquilizers that are used as a party drug by those who participate in the homosexual lifestyle. Desmond immediately made a snorting notion, signaling that he was familiar with the illegal drug if he had not been given it himself.

Comments on the Facebook livestream expressed frequent horror at this display.

One comment read: “This breaks my heart. Such a beautiful innocent baby boy being taken advantage of. This is so wrong. Mom do your job!!”

Another facetious comment reads as follows: “I’m calling it right now, this kid is growing up well adjusted and no mental health issues whatsoever…”

Others who are drinking the kool aid for this sick agenda expressed sympathy with the child and what is being done to him.

One woman wrote: “Do you people realize this is a kid? Like grow up and stop being rude!! Let him be himself!!! Grow up and stop watching if you don’t like it.”

Another female commented the following: “Girl you be slaying all these haters and I love every second of It!!! You both are so beautiful ugh when I grow up I wanna be like you.”

These useful idiots usher in an agenda so wicked that it would not have even flown in Sodom and Gomorrah. It is no coincidence that child drag queens are being paraded around by the LGBT community right as there is a mainstream media blitz to normalize pedophilia.

These are not coincidences, folks. The modern left is less of a coherent political movement than it is a death cult at this point, and they are advancing for the souls of our children.

Reprinted from The Schpiel