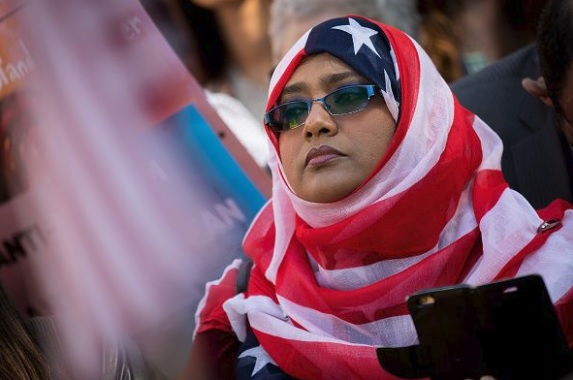 Islam, as written in the Koran, is diametrically opposed to America, Christianity and our Constitution.  This is why this should be alarming to Americans.

Again, as with previous reports, Deplorable Kel has documented a flood of Muslims across the united States that are either vying for elected office or have won office.

In a recent post, she listed those who have already put into positions of representation in the united States this year.

Hammoud is the first Arab Muslim person to hold this seat.

Hammoud was sworn into office on the quran.

Sadaf Jaffer was elected Mayor of Montgomery Township, New Jersey, in Jan. 2019. She is the first female Muslim Mayor in the U.S.

Jaffer and 3 other New Jersey Muslim Mayors were honored by CAIR.

RELATED:  Republicans Pull A Democrat on Healthcare Bill: Many Haven’t Read It! (Video)

Abboud is a Muslim convert who has worked for the Council on American-Islamic Relations (CAIR) & the Muslim American Society (MAS).

Johnson-Harrell is the first Muslim woman elected as State Representative in Pennsylvania.

Johnson-Harrell is the Founder of The CHARLES Foundation, which advocates for more gun laws.

Johnson-Harrell was sworn into office on the quran.

Samba Baldeh was re-elected as alderman in district 17 for the Madison City Council, in Wisconsin, in April 2019. Baldeh was first elected in 2015.

Baldeh is a Muslim immigrant from Gambia.

Syed Abbas was elected as a District 12 member of the Madison Common Council in Wisconsin, in April 2019.

Abbas a Muslim immigrant from Pakistan.

Minza Karim was elected as a member of the Middleton-Cross Plains Board of Education in Wisconsin, in April 2019.

Akram Khan was elected as a Mequon school board member on April 2, 2019.

Omar Sabir was elected to Philadelphia City Commissioner in Pennsylvania on May 21, 2019.

Kermally is a Muslim man who was born in Kampala, Uganda and his parents were born in India.

Zulfat Suara, a Muslim Nigerian immigrant, was elected to the Nashville Metro Council on Aug. 1st 2019.

Suara is chair of the American Muslim Advisory Council (AMAC).

Suara was sworn into office on the quran.