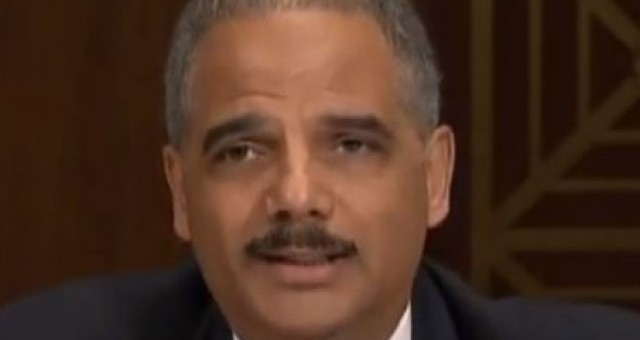 Democrats have been crowing about turning Virginia completely blue earlier this week as the Garbage Party picked up majorities in the House and Senate.

They already owned the governorship with Ralph “Blackface” Northam, a bona fide racist which Democrats are perfectly fine with because he has a “D” behind his name.

Democrats claim their victories in previously purpose Virginia are a direct reflection of how ‘unpopular’ President Donald Trump really is.

See? See? Democrats are on the rebound now because everyone hates Trump.

As The Wall Street Journal’s Kimberly Strassel notes, there is a much simpler — and sinister — explanation for what happened in Virginia.

The Democrats’ redistricting effort caught the GOP flatfooted and buoyed the left’s win in Virginia, writes @KimStrassel https://t.co/OQ2Nm9NDeI via @WSJ

And his name is Eric Holder.

You remember him. He was Obama’s first activist attorney general before he left office to continue practicing his left-wing legal activism.

Holder has spent the last few years forming a group dedicated to rewriting electoral maps around the country so that they favor Democrats, of course. In other words, he’s using the Left’s well-worn Alinskyite tactic of blaming political opponents (Republicans) for doing what he is doing: Gerrymandering districts.

Democrats on Tuesday won total control of Virginia’s government, adding both chambers of the General Assembly to the governor’s mansion. They will redraw Virginia’s legislative district lines after next year’s census. The Old Dominion was already moving left, though the redistricting power likely cements Democratic dominance over Virginia for the next 10 years.

This was Mr. Holder’s plan. While most prominent Democrats spent the months following Donald Trump’s election plotting future runs, Mr. Holder was launching the National Democratic Redistricting Committee, committed to domination of electoral mapmaking through the courts and legislatures. The NDRC spent its first years aggressively litigating legislative maps it didn’t like, to great success. Virginia’s election was the first test of the electoral piece of Mr. Holder’s strategy, and it will now serve as the model by which Democrats attempt to gain redistricting power in 11 other key states next year.

“Key states.” Which means, not states where Democrats already dominate (think the entire West Coast and most of the East Coast).

Sinister? You bet. Politically brilliant, though. And once again, Democrats catch Republicans with their thumbs in a place we can’t speak of here:

The NDRC is instead the Democratic version of the GOP’s success of a decade ago, the Redmap Project. Democrats, flush from Barack Obama’s 2008 victory, tuned out the state legislatures. Republicans used their inattention, along with a sweeping cash advantage and a backlash against the Obama presidency, to flip 21 state chambers in 2010, allowing them to dominate map-drawing after that year’s census. That power helped consolidate Republican control of state chambers and the U.S. House. Republicans might be flattered by Mr. Holder’s imitation—if they weren’t so busy getting crushed.

The Holder “sue to blue” litigation strategy has already yielded major gains for Democrats, as state judges struck down maps drawn by Republicans and required changes that ultimately aided the Democrats. Example: Pennsylvania’s Supreme Court—which is chosen through partisan elections and has a Democratic majority—in 2018 overruled the U.S. House maps drawn by the Republican legislature and produced its own version. The new maps helped Democrats flip three net seats. In Virginia, federal judges redrew the state legislative map to aid candidates running this week.

Now you know why it is vital for Trump to win another four years and for the Senate to remain in GOP hands, at a minimum: Presidents pick federal judges (and Supreme Court justices).

More and more our country is governed by the judiciary these days, the branch the founders believed would be the weakest.

Democrats know they can’t win majorities with straight-up fair elections. So they do things like this to tip the scales in their favor.