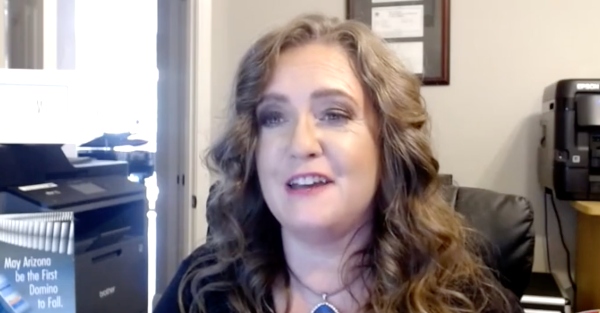 (Natural News) Though the garbage ‘mainstream media’ continues to claim there was no widespread vote fraud during the 2020 election that cost Donald Trump his reelection, volunteers who have stuck with the process of auditing ballots continue to report findings that are more than scandalous; they are bound to tear our republic asunder if the issue isn’t addressed.

One of those brave souls is Liz Harris, a volunteer helping out with the biggest audit thus far — 2.1 million votes cast in Maricopa County, Arizona.

In an interview with top podcast host Steve Bannon for his “War Room” broadcast this week, Harris dropped bombs: She revealed that the audit has turned up stunning new evidence of outright fraud and “missing votes” to the tune of hundreds of thousands, far more than the 11,000 or so votes by which Trump allegedly “lost” to Joe Biden in the state.

An independent canvas of the 2020 election in Maricopa County found over 260,000 “lost” and “ghost” votes, according to a report released Wednesday and discussed on Steve Bannon’s War Room.

The response from supporters of restoring election integrity before 2022 was immediate and included calls for decertification.

Liz Harris, founder of the Voter Integrity Project, organized the canvas which is separate from the Arizona state Senate audit.

In her interview, Harris declared that the canvas of ballots revealed that “two primary categories of ineligible ballots and election mishandling, encompassing hundreds of thousands of votes, render the 2020 General Election in Maricopa County uncertifiable.”

She said that some 173,104 “missing or lost” votes were ultimately reported by canvassers who traveled door-to-door to verify registrations and voting information for tens of thousands of Arizona residents.

“These are American citizens living in Maricopa County who cast a vote, primarily by mail, in the election and yet there is no record of their vote with the county and it was not counted in the reported vote totals for the election,” said a report Harris wrote.

“Additionally an estimated 96,389 mail-in votes were cast under the names of registered voters who were either unknown to the residents of the registration address or who were verified as having moved away prior to October 2020,” report added.

“Other irregularities were uncovered during the canvass at a smaller scale, including votes cast by mail from vacant lots, votes recorded from residents who had not actually voted, etc.,” the report added. “These results are a travesty to our democracy and our voting rights. In addition to impacted local races, such as Maricopa County Board of Supervisors District 1, decided by 403 votes, key statewide race margins are well within the numbers shown above. The Presidential race was decided by 10,457 votes statewide, and the U.S. Senate election was decided by 78,886 votes statewide.”

“I don’t think they will get away with it,” Trump said recently after learning of the massive vote discrepancy, according to World Tribune.

The report makes a singular recommendation to fix the problem: “Ban vote-by-mail.”

In fact, that isn’t a novel idea. In 2005, a joint report authored by Republican James Baker and Democrat and former President Jimmy Carter on the issue of voter integrity and ballot security recommended that very same thing: Do not authorize vote-by-mail because it is ripe for vote fraud.

Among the other recommendations:

— “The inclusion of an auditable backup on paper for electronic voting systems in order to provide confidence that ballots cast using these machines are counted accurately.”

According to the Daily Signal, if the recommendations made in that landmark report would have been universally adopted, then the problems seen in the 2020 election could have been averted.

And let’s be honest: Democrats in key battleground states got liberal judges and Democratic state officials to change ballot rules and voting laws because of “COVID” — and the Democrat presidential candidate wound up “winning.” That included the first-time use of mass mail-in voting.

Anyone who truly believes they weren’t responsible for creating an environment to be exploited by fraud is deluding themselves.