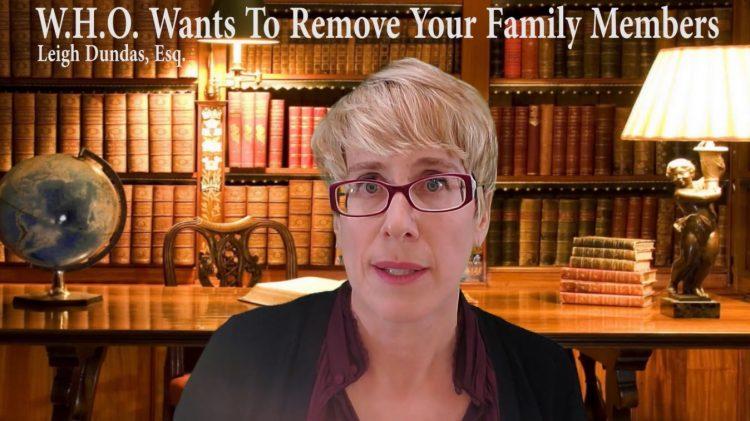 We’ve covered several stories concerning tyrannical government schemes to remove children from loving homes with absolutely no authority to do it. Now, we’re seeing it under the guise that is the hoax known as coronavirus and COVID-19. Understand that when I say hoax, I mean all of the lies about what it is and how it is transmitted in order for government to usurp its authority over the people and impose draconian measures against their liberties. Now, a human rights attorney is speaking out against the World Health Organization’s desire to not only lock everyone down, but then begin invading their homes looking for possible people they can tag at positive for coronavirus.

In a three minute video, Human Rights Attorney Leigh Dundas presents not only WHO’s position on doing this by letting their own spokesman say it, but then she warns people that if this is put into place, they will not be coming house to house asking nicely, but with a show of government force.

Though the video is only three minutes long, the information she expresses packs a powerful punch, drawing on her own dealings in Cambodia and pointing back to Auschwitz.

The WHO spokesman said, “Transmission has been taken off the streets and pushed back into family units.”

“Now, we need to go and look in families to find those people who may be sick and remove them and isolate them in a safe and dignified manner,” he added.

Safe and dignified? Upon what authority is this criminal standing to even voice such a thing. It’s called kidnapping. How is that either safe or dignified? It isn’t.

Dundas comments that statements like the one above cannot be just taken at face value.

While she admits they may have good intentions, at the end of the day, it will be government by force that carries out the plan.

However, she pointed out that at no time has any government ever come and said they were going to remove your child from you without force, claiming it was for their good.

This is why they purposefully hide how they will go about carrying out their agenda.

Dundas then provided a personal story from Cambodia.

Be sure to listen to her account about the genocide in Cambodia that took place decades ago.

In all of that, the government told the people they were moving them to the countryside for a better life, but what they really did was murder them: men, women and children and buried them in a shallow grave.

Ronald Reagan was right about those infamous words about someone saying they are from the government and here to help.

That is never the case, regardless of the intention.

Tim Brown is an author and Editor at FreedomOutpost.com, SonsOfLibertyMedia.com, GunsInTheNews.com and TheWashingtonStandard.com. He is husband to his “more precious than rubies” wife, father of 10 “mighty arrows”, jack of all trades, Christian and lover of liberty. He resides in the U.S. occupied Great State of South Carolina. . Follow Tim on Twitter. Also check him out on Gab, Minds, MeWe, Spreely, Mumbl It and Steemit
(Visited 35 times, 1 visits today)
Share
Tweet
Share
Pin