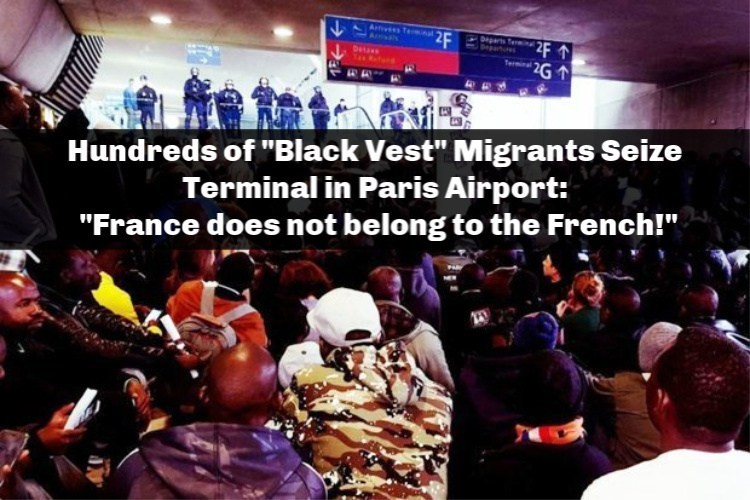 “France does not belong to the French! Everyone has a right to be here!” one person can be heard yelling into a loudspeaker.

The protest was organized by the migrant support group “La Chapelle Debout,” which said their members call themselves “Black Vests.”

The group comes amid the country’s months-long “Yellow Vests movement” over tax reforms; French citizens are required to carry yellow vests in their vehicles for emergencies. (source)

A quick-thinking person took video, which has been widely shared across Twitter.

#Update: Just in – Video of the moment these 400 African illegal immigrants stormed in the terminal of the Charles de Gaulle Airport in #Paris. #France pic.twitter.com/vPaxkpseDz

#Breaking: Just in – Reports that undocumented immigrants are protesting in the Charles de Gaulle Airport in #Paris right now and won't let people board their flights until they meet and talk with with the prime minister Édouard Philippe of #France, Riot CRS police on the scene. pic.twitter.com/fextoWCs6S

The organized group released an official statement and warned this will not be the last effort such as this.

In an official statement, the group asked to meet with Prime Minister Edouard Philippe over the country’s asylum policy and the leaders of Air France. They demanded that the airline “stop any financial, material, logistical or political participation in deportations.”

A migrant who took part in the protest warned it wouldn’t be the last.

“We have targeted Air France, and other actions will follow,” he told the paper. (source)

All of the migrants involved appear to have a common thread.

#Update: Just in – All of these undocumented immigrants are from African decent, and are demanding that prime minister Édouard Philippe, will give all of them permanent legal status and papers to stay in #France. And saying we will not leave Charles de Gaulle Airport in #Paris. pic.twitter.com/lWLonHL6ww

This is not an isolated incidence of migrants behaving badly. Here’s another example and another still.

What an incredibly dangerous precedent

The migrants are reported to have refused to allow passengers to board their planes until their demands were met. They were held back by riot police but actually got a meeting with a representative of Air France.

What kind of precedent does this set? One tweet even suggests “Prime Minister Édouard Philippe caved into their demands and gave them all permanent legal status, though that hasn’t been confirmed.” (source)

#Breaking: Just in – The situation around the Charles de Gaulle Airport in #Paris has ended, when 400 illegal African immigrants stormed the terminal and demanded from prime minister Édouard Philippe, will give all of them permanent legal status to stay in #France.

This means that you can go into a foreign country and make demands and people will actually listen. People will actually capitulate to your demands in a place where you are by the grace of the local government. If there was any doubt that there’d be more of these types of sieges, I think we can lay that to rest right now.

We have not seen the end of the Black Vests

I’m not against people migrating to other countries. I’ve done it myself and I’ve brought my children back to my own country. But there are processes. This is not one of those processes.

Currently, reports say the siege has ended. There are no reports of arrests.

France does not belong to the French, indeed.