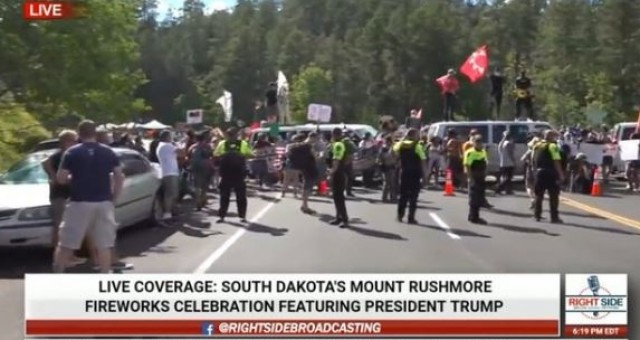 Hundreds of protesters have arrived at Mt. Rushmore ahead of President Trump’s celebration of America and have blocked the entrance to the event using vehicles in order to form a blockade.

According to the Sioux Falls Argus Leader, at 4:30 p.m. MT, authorities declared the protest as an unlawful assembly over a megaphone. Police are demanding protesters vacate the premises or they will be arrested. At 5:15 p.m. MT, at least one person had been arrested, but the road was still blocked.

The National Guard was on scene at 5:20 p.m. MT to help clear the crowd, and several of the protesters dispersed shortly after.

But many protesters have remained prompting the National Guard to fire close range smoke shells to clear the crowd.

They donned tear gas masks as well, and pepper spray was used on some of the protesters at 6 p.m. MT, though it wasn’t clear whether the Guard or the Pennington County Sheriff’s Office fired it.

These people are insane. https://t.co/o8TBECTsNX

This is a breaking news story and will be updated as more information comes in.