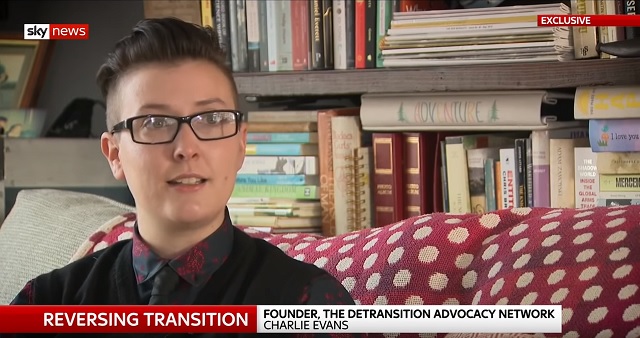 We’re living through one of the most insane times in all of human history.

Hundreds of young transgender people are seeking help to return to their original sex, a woman who is setting up a charity has told Sky News.

Charlie Evans, 28, was born female but identified as male for nearly 10 years before detransitioning.

The number of young people seeking gender transition is at an all-time high but we hear very little, if anything, about those who may come to regret their decision.

There is currently no data to reflect the number who may be unhappy in their new gender or who may opt to detransition to their biological sex.

Charlie detransitioned and went public with her story last year – and said she was stunned by the number of people she discovered in a similar position.

“I’m in communication with 19 and 20-year-olds who have had full gender reassignment surgery who wish they hadn’t, and their dysphoria hasn’t been relieved, they don’t feel better for it,” she says.

“They don’t know what their options are now.”

Charlie says she has been contacted by “hundreds” of people seeking help – 30 people alone in her area of Newcastle.

“I think some of the common characteristics are that they tend to be around their mid-20s, they’re mostly female and mostly same-sex attracted, and often autistic as well.”

It’s worth noting the puberty blockers they’re putting kids on may cause irreversible sterility and even death.

Last week, it was reported that the poster child for the highly profitable trangender industry, Jazz Jennings, is delaying going to Harvard due to “mental health issues.”

Jazz Jennings announced on Tuesday that she has delayed her admission to Harvard University. Now, a source exclusively revealed to RadarOnline.com that her decision was due to a decline in the TLC star’s mental health.

A source close to the Jennings said the I Am Jazz star has been “so stressed out” and “showing signs of depression” since as early as last fall.

“Jazz hasn’t been herself for months now,” the source told Radar. “She was not in the right position to be starting school and living on her own.”

[…] Last year, the famous teen also underwent a gender confirmation surgery, which she described as the “final step of transitioning.”

Our government and media are currently panicking over vaping (and rightly so) but at the same time they’re actively encouraging children to take puberty blockers, hormones for people of the opposite sex and get irreversible gender reassignment surgeries.