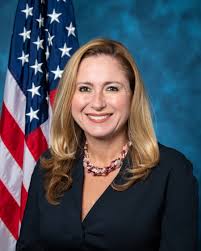 She is not exactly a household name in American politics, but, nevertheless she also seems to have her hands in the Ukrainian cookie jar.

Her husband was the beneficiary of $700,000 from a Ukrainian oligarch named Igor Kolomoisky.

This is her husband, not some distant relative, and it surely seems fishy that yet another Democrat has proven financial ties to Ukraine.

Robert Powell, the husband of Rep. Debbie Mucarsel-Powell, D-Fla., reportedly took $700,000 from a Ukrainian oligarch named Igor Kolomoisky. Mucarsel-Powell sits on the House Judiciary Committee, the committee that drafted two articles of impeachment against President Donald Trump for his alleged abuse of power with regards to Ukraine.

In 2018, the Daily Beast reported that a number of businesses linked to Kolomoisky hired Powell as an attorney. One of those firms paid Powell at least $700,000 over two years, according to public records.

The Miami Herald reported Powell was working for companies tied to Kolomoisky for 10 years. Powell made most of his money in the two years leading up to his wife’s election in 2018.

Kolomoisky has been accused of contract killings and embezzlement in the past. Yet, in 2018 when Mucarsel-Powell was running for her seat, she did not see her husband’s work as relevant to her campaign.

“Debbie Mucrasel-Powell is running for Congress, not her husband. To imply that Debbie has anything to do with her indirect shareholder of a parent company that once employed her husband is an enormous stretch,” said Michael Hernandez, senior communications advisor for her campaign in 2018.

While Mucrasel-Powell may have convinced her constituents that her husband’s work is unrelated, it is a clear conflict in the current impeachment of Trump. Mucarsel-Powell voted to impeach Trump.

Donald Trump certainly knows who Mucaresl-Powell is and mentioned her by name on a recent Florida visit.

From The Miami Herald:

In the midst of a riff on trade policy during a campaign rally in Sunrise last week, President Donald Trump name-checked Rep. Debbie Mucarsel-Powell, a Miami Democrat who will have a say in this week’s impeachment hearings as the probe shifts to the House Judiciary Committee.

“Yet, [House Speaker Nancy Pelosi] and the Democrats, they just have done nothing,” Trump said to his supporters. “They’re doing nothing, folks. They’re doing nothing. It’s a terrible thing. It’s a terrible thing. So, Congresswoman Mucarsel-Powell, where is she? Is she here? I’d love to see her and Congresswoman [Donna] Shalala.”

Mucarsel-Powell responded, via video, by noting her work on impeachment, which for months was a political third-rail for many Democrats in competitive districts like her Miami-to-Key West seat that has frequently changed party hands in the last decade.

“Hey President Trump, it’s Congresswoman Debbie Mucarsel-Powell and I’m right here,” she said in the video posted to her Twitter account. “You can find me next week in the Judiciary Committee where I’ll be working to protect our country and the American people from your attacks on our democracy because, unlike my Republican colleagues in Washington, I’m not afraid of you.”

Don’t buy into any of the BS you hear coming from the left.

Debbie Mucarsel-Powell is not the only Democrat who seems to have her hands in The Ukrainian cookie jar.

But for a couple of guppies, they did pretty well for themselves.