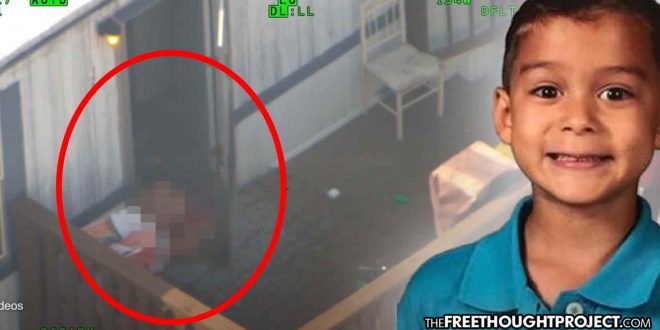 Bexar County, TX — In December 2017, the Free Thought Project reported on the tragic death of 6-year-old Kameron Prescott whose life was stolen from him when police opened fire on an unarmed woman suspected of stealing a car. In June of 2018, the family of the little boy who was gunned down by police found out that the cops who killed their son all went back to work. Then, in March of last year, the family found out that none of the officers responsible for the death of her son would face charges. After the system refused to hold itself accountable, the family filed a lawsuit against Bexar county and have been getting the run-around ever since.

This month, the family announced in a letter that it is now calling on Bexar County to settle the lawsuit. According to KENS5, in a 16-page letter sent to county commissioners, attorneys for Prescott’s father and mother, Christopher and Rubi Prescott, laid out what they had discovered since filing suit against the county, writing that while they are “confident in our case,” the Prescott family is “willing to accept, at this time, a fraction of what a jury would likely award as damages.”

The letter reveals new details of Prescott’s killing, including the release of a video which proves a DPS trooper informed the officer that the woman police were shooting at, had no weapons. Also, the letter states that police falsely claimed the suspect, Amanda Jones, was involved in a vehicle burglary which they claim prompted the chase. In reality, according to the letter, a bounty hunter had tipped off police that Jones was in the area.

“What we had was a case where a call from a bounty hunter led to a two-hour police chase of a non-violent suspect, and it resulted in that suspect fleeing and standing in front of a mobile home where there was a child’s bicycle on the porch and a car in the driveway and a 6-year-old boy playing inside that had nothing to do with this police chase,” said Tom Crosley, an attorney for Kameron Prescott’s father, Christopher Prescott. “And deputies in this case fired 20 rounds from assault rifles. And one of those rounds killed this innocent young child.”

In December 2017, the incident received widespread coverage as the mainstream media reported that Kameron was hit with a “stray bullet.” However, this bullet was anything but “stray.” The shot that killed young Kameron was deliberately fired at an unarmed woman. In fact, he was hit twice.

The officers’ guns did not accidentally go off. Deputies John Aguillon, George Herrera, Jesse Arias and Johnny Longoria all deliberately shot at an unarmed woman, and their fear, poor judgment, and carelessness led to the death of an innocent child.

Court documents state Jones walked into Christopher Prescott’s home and that he immediately told Jones to leave the house, to which she responded, “you have kids and I do not want trouble.”

When Jones turned around to leave the home, cops opened fire on the unarmed woman with AR-15s, dumping 20 rounds into the occupied home, killing Jones and little Kameron.

The newly released video shows a DPS helicopter informing the deputies below that Jones was unarmed, just before they opened fire on her.

Although Kameron didn’t live in the home in which he was gunned down by police, it was his father’s house and he was visiting him after getting out of school early on that fateful Thursday for Christmas break.

According to KENS5, Christopher Prescott told them the last words he heard his son utter were “ouch daddy, ouch.” After they killed his child, deputies, he said, placed him in handcuffs and hauled his son off to a hospital where he later died. The letter states the toy Kameron Prescott was toting prior to the gunfire was found near his blood, still blinking.

Had a regular citizen opened fire on an unarmed woman and killed an innocent child in the process, rest assured that they would be sitting in a jail cell right this moment. However, because the people who killed this unarmed woman and child are police officers, there will be no #JusticeForKameron.

Naturally, the sheriff’s department claimed the officers acted appropriately—by opening fire on an unarmed woman—and killing her and a child in the process. Longoria swore under oath that he saw Jones’ pistol smoking — but there was no pistol. Police then claimed she was holding an object when she walked out of the trailer — which was never recovered.

Herrera was wearing a body camera during the shooting, but police claimed it wasn’t turned on.

In a disturbing move, the county has been acting behind the scenes to dismiss the Prescotts’ lawsuit, claiming they didn’t mean to do it.

“They’re taking the position that because they didn’t mean to shoot Kameron, they really meant to shoot this woman, and that because he was an innocent bystander, they shouldn’t be held responsible for causing his death,” Crosley said. “We think that’s a ridiculous position for the county to take.”

It is not only ridiculous but it speaks to the nature of the state which can kill with impunity and face no consequences.

“Why did it escalate to this?” the letter states “Why did a bounty-hunter-initiated event result in the death of a child in an entirely different neighborhood? Why did our deputies (who were the only people that actually had guns) end up firing twenty rounds at an unarmed person and an obviously-occupied mobile home—a structure that would provide no meaningful resistance to gunfire? Does the County really believe almost twenty rounds fired at an occupied home was ‘only the amount of deadly force necessary?’”