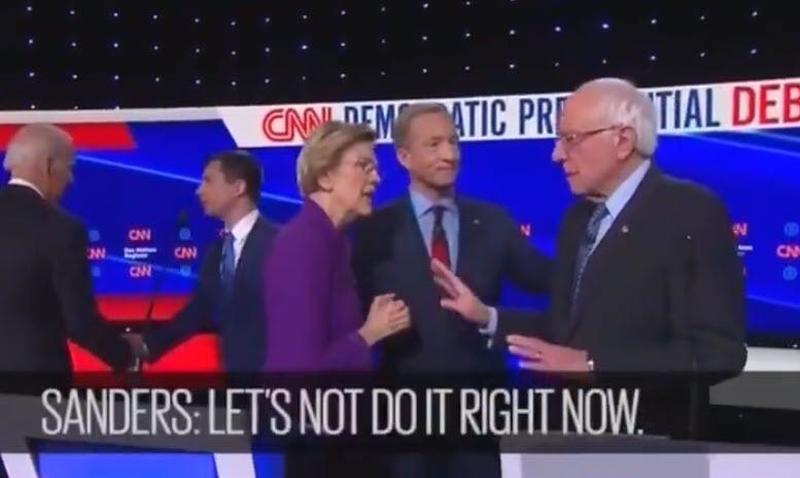 Having spent most of her political life lying about her heritage, Senator Elizabeth Warren dropped the liar-liar-pants-on-fire hammer on Senator Bernie Sanders last night in what was by far the most entertaining – albeit brief – part of the entire night’s Democratic debate.

CNN has released the audio to go with the most awkward viral moment following the debate on stage where Warren refused to shake hands with Sanders.

CNN reports that the conversation was not captured on the primary audio feed from the candidates’ podiums. After the debate, CNN did an inventory of the audio equipment that was used and found two backup recordings from the microphones Sanders and Warren were wearing.

CNN then synchronized the audio recordings with the footage that was broadcast live on Tuesday night.

The conversation played out on the debate stage, in public view, and occurred before Sanders and Warren’s clip-on microphones were removed.

Here’s what was said…

WARREN: I think you called me a liar on national TV

WARREN: I think you called me a liar on national TV

SANDERS: You called me a liar. You told me — all right, let’s not do it now.

STEYER: I don’t want to get in the middle I just want to say hi Bernie.

“I don’t want to get in the middle. I just want to say hi Bernie.” is a big mood.pic.twitter.com/16SbIYtj06

Aside from the he-said-she-said nature of the accusations, we have to admit the most comedic aspect was billionaire Tom Steyer caught awkwardly in the middle of these two soak-the-rich socialists.

We suspect this is what is really irking Warren…

Don’t voters/respondents/bettors know, she is a woman!!

It would appear from the last few days – and CNN’s abhorrent treatment – that the establishment is out to get Bernie once again.