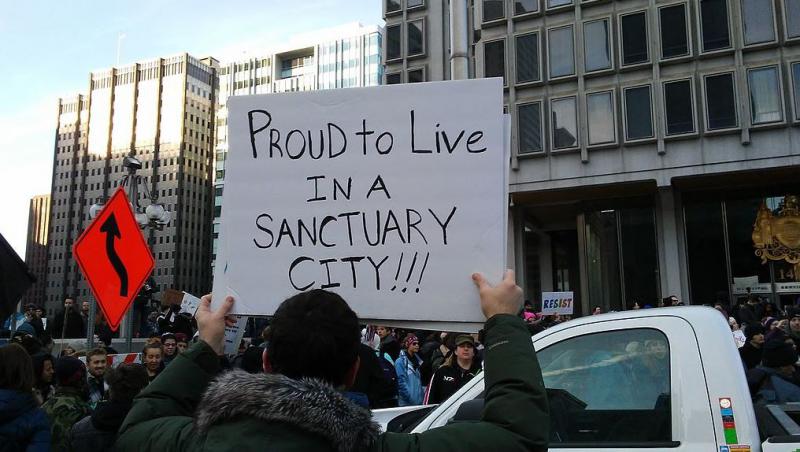 Within hours of a suspected Salvadoran illegal alien rapist purposefully being released by local authorities in defiance of U.S. Immigration and Customs Enforcement, the illegal returned to the home of his original victim in an attempt to rape her again.

Thanks to quick-acting ICE agents, however, his attempt failed.

“Almost immediately following his release from the Oklahoma County Jail on Oct. 9, Ulises Perez went to the home of the woman he is alleged to have raped. The victim contacted the police and Ulises Perez fled the scene.”

What happened was so stunning it even caught the attention of top-level Trump administration official Ken Cuccinelli, the acting director of U.S. Citizenship and Immigration Services.

This rapist illegal alien went back to the home of his rape victim as soon as he was released. Local sheriff ignored @ICEgov detainer to remove this rapist from the community & the country. https://t.co/J34vcsqowq How often must victims be terrorized b/c of sanctuary policies?

ICE field office director Marc Moore, who in a statement also blasted the Oklahoma County Sheriff’s Office — which, surprisingly, has been led by a self-identified “Republican” sheriff since 2017 — for its dangerous defiance of the law.

“It is unconscionable that someone who is sworn to uphold the law would find it acceptable to release an alleged rapist who is illegally present in the U.S. back into the community when there are other options available under federal immigration law,” Moore said.

“Within a few hours of being released, this illegal alien was back at the home of the rape victim where he was free to re-victimize her and harm other members of the community. Fortunately, ICE deportation officers were able to quickly locate this individual and safely take him back into custody.”

Perez was reportedly originally booked on Sept. 30 on suspicion of rape. After interviewing him on Oct. 8, ICE officials lodged an immigration detainer with OCSO requesting that he be transferred into their custody “in the event that he was scheduled to be released from local custody.”

Less than 24 hours later, the office released Perez without informing ICE and honoring the detainer. Later that same day, he was arrested near his victim’s home.

OCSO has responded to these accusations by issuing a flip-flopping statement claiming it wasn’t responsible for Perez yet also arguing that it’d provided ICE with notification of his release.

Our response to a news release issued by @ICEgov. pic.twitter.com/N66hfm0TOk

“ICE erroneously reported that the OCSO arrested the individual when another law enforcement agency made the arrest,” the statement reads.

If another agency arrested Perez, why was he in the office’s custody? And why would a lack of a local charge matter since ICE had already filed an immigration detainer?

“ICE did not have a warrant for OCSO to hold the individual, but we did contact ICE before his release and notified the agency that they would need to send someone to pick him up on their ‘hold,’” the statement continues.

The statement also claims OCSO “is not a sanctuary county as we have always worked with ICE.” Yet it ends with the office revealing that it’s reached “out to the Oklahoma County District Attorney’s Office for an opinion regarding the legality of ICE detainers.”

Responding to the statement, one critic wrote it was “insufficient”: “You still released an illegal alien who returned to the victim’s house for another attack. Maybe if he went to your home, you’d feel different. Grow a brain.”

In responding to this criticism, OCSO seemed to reveal more of its disturbing bias.

There wasn't a second attack. The arrestee was brought in on a complaint of rape and the arresting agency asked he be released as they continued their investigation. The arrestee did not commit a crime or attack after his release. We appreciate our continued partnership with ICE.

Officials at the office appear to not realize that illegally entering the United States is itself a crime. Nor do they seem to care at all about the victim, who was retraumatized by having her assailant show up again, which is every victim’s worst nightmare.

The events that transpired in Oklahoma County come amid a push by the Democrat Party to normalize and potentially decriminalize illegal immigration. Democrats appear to believe that foreigners have the right to illegally immigrate to the U.S. And though the OCSO is run by a Republican, it appears the office nevertheless shares this dubious vision.