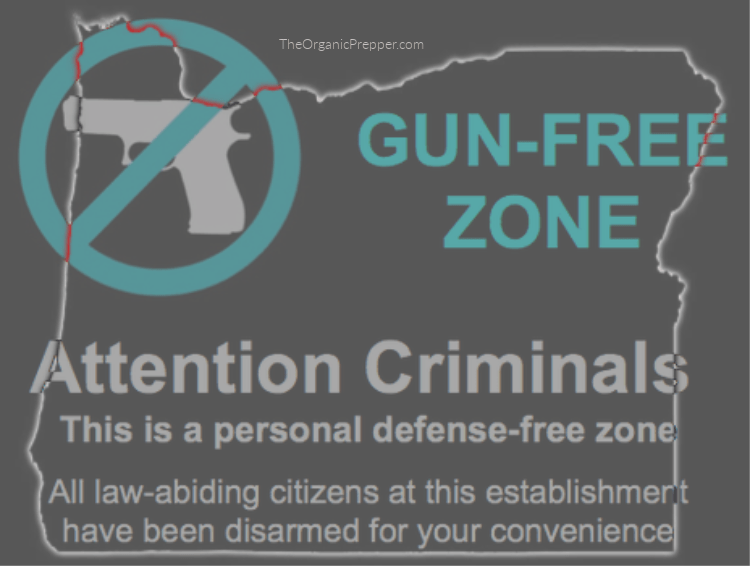 A new gun control bill introduced in the Oregon State Legislature added 45 pages of draconian amendments the night before the vote. SB978 passed the Judiciary Committee yesterday and now heads to the Oregon Senate.

It’s a good thing that some parts of this state have vowed to be 2A sanctuaries because Oregonians are going to need them. If the gun owners – and even pepper spray owners – in other parts of the state hope to defend themselves, they could be facing a vast new array of felony charges.

The battle for the right to bear arms is rapidly spreading across the country. In February, the House of Representatives passed two sweeping national bills. New Mexico has passed 6 outrageous new laws that sheriffs are refusing to enforce, and sheriffs in Washington state are also rebelling. On the other stand, two states have introduced invasive laws requiring would-be gun owners to hand over access to years of personal social media.

What’s in the unconstitutional bill, you ask?

They want to raise the minimum age to buy a gun to 21 in certain cases.

Keeping your gun locked up

Residents will be required to keep their guns locked up at all times that they are not being carried. These rules will render guns all but useless in the event a person needs to access them to protect themselves and their family.

A person who owns or possesses a firearm shall, at all times that the firearm is not carried by or under the control of
the person or an authorized person, secure the firearm:

Failure to follow these rules is a Class C Felony. Also, don’t get excited about the phrase “gun room” because your bedroom doesn’t count.

I know that the time I had to protect my daughter with a gun, if my firearm locked up, had on a trigger lock, and had to be loaded, it would have delayed my potential to do so to a horrific degree.

Gun owners are liable for the acts of gun thieves

If your gun/guns are stolen, you must report it. Failure to do so is a Class B felony per weapon. And if the thief hurts or kills someone with the stolen firearm, the owner is liable for two years.

If you have kids, look out.

Any adult who transfers a firearm to a minor is responsible for any actions taken by that minor with the firearm. And if you want to take your kids shooting or hunting, they must be “directly supervised.” And if a young person gets ahold of a parent’s gun, the parent is liable for the young person’s action. If the gun isn’t secured as per the rules above, then the adult is charged with even more crimes.

Oregon wants to crack down on unregistered guns.

The next section deals with “ghost guns.” Pages 11-19 offer a lengthy list of rules, restrictions, requirements, and record-keeping for the transfer of antique guns, gun parts, and much more. If you have them, you’ll be a felon upon the passage of this bill.

And as everyone knows, registration is only one step away from confiscation. Here’s an article by Selco, explaining how gun confiscation could go down.

The next section makes it more complicated to transport a gun.

If this passes, gun owners who are not concealed-carry permit holders will have to jump through all sorts of hoops to transport a firearm in a vehicle, including locking it in a box in a “secure” are of the vehicle.

The next section deals with CC permits and the related fees, increasing them in another effort to put an undue burden on law-abiding citizens.

And then there’s the stuff about “public buildings.”

In this bill can find a massive list of restrictions regarding having a gun on the premises of or “near” public buildings. To me, this is the scariest part because it’s so incredibly arbitrary.

In section 25, Local Authority to Regulate Firearms in Public Buildings,” airports, ports, hospitals, schools, colleges, universities probate courts, city halls, homes of officials, and other “public buildings” – and even their grounds – can restrict not only guns but also the following:

Public places as defined in the bill need only to “post a sign, visible to the public, identifying all locations where the affirmative defense described in ORS 166.370 (3)(g) is limited or precluded.”

And if you ignore the sign and get caught?

You’re guilty of a Class C felony. Even if your gun is unloaded.

Any person who intentionally possesses a loaded or unloaded firearm or any other instrument used as a dangerous weapon, while in or on a public building, shall upon conviction be guilty of a Class C felony.

Go here to read the insanity in detail.

Congresswoman Gabrielle Gifford’s anti-gun foundation was delighted with the bill even before the super-secret amendments were added. In a statement, spokeswoman Robin Lloyd said:

“Gun violence hurts hundreds of Oregon families each year. The proposed provisions in the bills heard today are the critical next steps that Oregon should take to save lives. For example, homemade, untraceable ghost guns pose serious threats to law enforcement and communities impacted by gun violence. A commitment from lawmakers to stem the flow of these firearms will ensure criminals aren’t able to easily get their hands on an undetectable weapon. Today’s hearings highlight a serious commitment by the legislature to reduce the epidemic of gun violence in Oregon. I applaud Attorney General Rosemblum [sic] and the Oregon legislature for prioritizing these lifesaving measures.”

If it passes, it will spread.

Gun control laws are like a virus – if they pass in one place they’ll spread to other places. And there’s little reason to believe that in this era of anti-gun hysteria, the legislature will strike down this unconstitutional bill. Thankfully, 13 of 36 Oregon sheriffs have already vowed to make their counties Second Amendment sanctuaries.

But heaven forbid an Oregonian gets caught driving out of their 2A sanctuary county with a usable firearm.