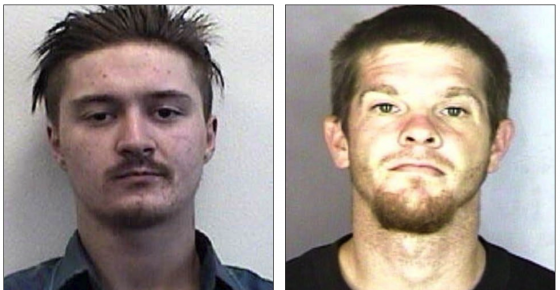 When disaster strikes, the first instinct that some people have is to go out and loot homes that have been evacuated. I wish that this wasn’t the case, but it seems to happen every time that we see a huge natural disaster. You have to be quite sick to want to take advantage of people that have left their homes during a great tragedy, but we have seen it happen over and over the last several years. Twisted individuals that have had their consciences completely seared think that undefended homes are an easy target, and a lot of times they get away with it. Fortunately, authorities were able to catch two degenerates that were just looting evacuated homes in Oregon, but only after they led the police on a high speed chase…

Two men have been charged by Oregon authorities with looting properties that were evacuated by owners fleeing the deadly wildfires that have so far forced half-a-million people from their homes, killed at least 31 people in three states, and left dozens more missing.

After their vehicle was disabled, the two looters took off on foot, but officers were quickly able to hunt them down…

The two men then got out of the van and made a run for it, according to sheriff’s deputies.

One of the men was immediately arrested on the golf course while the other was seen going into a goat shed near the area.

A K9 unit managed to locate the other suspect, who was also taken into custody.

Of course this is just the tip of the iceberg when it comes to looting in this country. Earlier this year, literally thousands of young people went on an unprecedented looting spree all over the U.S. during the civil unrest that erupted in the aftermath of the death of George Floyd. Authorities are still making arrests as they continue to identify more of the suspects that were involved in looting stores, and hopefully as many looters will be brought to justice as possible.

But the looting will never stop. In fact, it will only get worse as our society continues to decay.

And if desperate individuals will stoop to such lows now, what will they be willing to do to you and your family once things get really, really bad and all of their food is gone?

Today, we have more reason to literally be frightened of the behavior of our fellow Americans than we ever have before. By now, I am sure that you have already heard of the shocking ambush that we just witnessed in the Los Angeles area. When protesters heard where the police officers that had been shot were taken, they decided to block the entrance to the hospital…

Protesters have blocked the entrance to the hospital where the two Los Angeles sheriff’s deputies ambushed in a shooting Saturday are fighting for their lives, chanting: ‘We hope they ******* die.’

The officers, one the 31-year-old mother of a six-year-old boy, were shot at the Metro Blue Line station at Willowbrook Avenue and Oak Street in Compton by a male suspect who then fled the scene.

I don’t know if I have words that are strong enough to describe how detestable this was.

Hospitals should be completely off limits for protests, and by blocking the entrance they were keeping people that needed emergency care from getting in.

There is no reasoning with people like that. In the past, many Americans have attempted to avoid a lot of the craziness that goes on by living in low crime areas, but at this point social decay is spreading like a cancer all over the nation. Just a few days ago, we learned that the feds have successfully shut down a “meth superhighway” that involved hundreds and hundreds of people in major cities such as “Atlanta, Dallas, El Paso, Houston, Los Angeles, New Orleans, Phoenix, San Diego, and St. Louis”…

U.S. Attorney William Barr and Drug Enforcement Administration Acting Administrator Timothy Shea announced Thursday, at a press conference in Phoenix, a large meth bust across the U.S., seizing thousands of pounds of methamphetamine, tens of millions of dollars, and hundreds of firearms.

The operation was a six-month-long effort to bring down a ‘meth superhighway’ that was controlled by Mexican cartels and stretched across the U.S.

Some try to get away from all the crime by living in the middle of nowhere, but unfortunately the truth is that meth and other illegal drugs have made it to almost every small community in America at this point.

I don’t want to end this article on a bad note, and so let me share an example that demonstrates that there are still good people out there too.

A little more than a week ago, over 200 campers were trapped by wildfires near Shaver Lake in California, and National Guard helicopters were sent in to rescue them…

More than 200 campers were trapped near a boat dock on Shaver Lake in California’s Fresno County over the Labor Day weekend, encircled by flames and a blinding wall of wildfire smoke.

Chief Warrant Officer 5 Joseph Rosamond, piloting a California Army National Guard CH-47 Chinook, had already made the decision to try to put his helicopter down close by the desperate campers on Sept. 5.

Emergency personnel on the ground told Rosamond that the smoke made it too risky to conduct a close landing, but Rosamond knew that if he didn’t take a risk that those people would be in severe danger. The fires were closing in and time was running out, and so he made a conscious decision to be a hero…

“I was listening to the radio calls when the Chinook approached restricted airspace” near the lake, said Army Maj. Gen. David S. Baldwin, adjutant general of the California National Guard.

“Chief Rosamond told them, ‘Just tell us where the people are. We’re going to go get them,’” Baldwin said in a video conference call Monday with the aircrews and defense reporters.

There wasn’t enough room on the helicopters to take all of the campers out in one trip, and so the helicopters actually had to go back to the lake two more times to get everyone.

In the end, they didn’t finish the mission until 1:30 in the morning. 12 of the campers ended up in the hospital, but ultimately all 214 of them were saved.

Why can’t we have more heroes like Joseph Rosamond?

Sadly, the decisions that our society has made over the past several decades are really catching up with us, and at this point the criminals, looters and sickos greatly outnumber heroes such as Joseph Rosamond.

Everywhere around us social decay is rapidly getting worse, and millions of hearts are growing very, very cold.