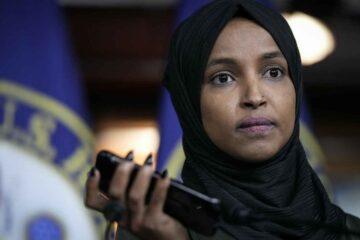 Reps. Ilhan Omar (D-Mogadishu) and Jan Schakowsky (D-Lightfootland) have determined to take action against “Islamophobia,” and their initiative is gaining traction. The House Foreign Affairs Committee on Friday approved their bill calling for a State Department “Islamophobia monitor,” and now it will go to the full House for further consideration. The idea that Pelosi’s House would reject such a bill is virtually inconceivable.

This all started back in October, when Omar and Schakowsky introduced the Combating International Islamophobia Act, which would, according to a press release posted on Omar’s website, “require the State Department to create a Special Envoy for monitoring and combating Islamophobia, and include state-sponsored Islamophobic violence and impunity in the Department’s annual human rights reports.”

This would supposedly “help policymakers better understand the interconnected, global problem of anti-Muslim bigotry. It will also establish a comprehensive strategy for establishing U.S. leadership in combatting Islamophobia worldwide.”

The press release said nothing whatsoever about combating jihad terror or about how suspicion of Islam may be created by the all too common spectacle of Muslims committing acts of violence while screaming “Allahu akbar” and justifying their actions by reference to Islamic texts.

Omar and Schakowsky claimed that “this year, the United States has seen over 500 documented complaints of anti-Muslim hate and bias.” Their link went to another press release, this one from the Hamas-linked Council on American-Islamic Relations (CAIR), claiming that these documented complaints include “hate crimes, harassment, school bullying, discrimination, hate speech, and anti-mosque incidents.”

“Hate speech”: this means that trivial incidents in which someone who is rude to a Muslim gets counted in as a hate crime, inflating the numbers of those crimes and contributing to the false impression that Muslims are victims of widespread discrimination and harassment in America today. With that low a bar, it’s no surprise that the press release at Omar’s site goes on to note that “in March, the United Nations Human Rights Council cited discrimination and hatred towards Muslims has risen to ‘epidemic proportions.”

Omar claimed that “we are seeing a rise in Islamophobia in nearly every corner of the globe. In my home state of Minnesota, vandals spray-painted hate messages and a Nazi swastika on and near the Moorhead Fargo Islamic Center. These types of incidents are all too common for Muslims in the United States and beyond. As part of our commitment to international religious freedom and human rights, we must recognize Islamophobia and do all we can to eradicate it. That’s why I’m proud to partner with Rep. Jan Schakowsky to create a special envoy to put an end to this bigotry.”

Really, that Nazi swastika business is terrible. But let’s try to keep some perspective, shall we? Muslims in Nigeria are subjecting Christians to murderous jihad attacks on a near-daily basis. Muslims in Pakistan persecute Christians and other religious minorities by means of that country’s draconian blasphemy laws, which have seen lives destroyed on rumors and false charges. Compared to that, some spray-painted graffiti just isn’t that big a deal, although certainly the louts who did it should be caught and prosecuted.

Omar doesn’t say anything about Muslims being beaten or murdered, or even denied jobs and preferment, in the United States, because such incidents are vanishingly rare; to establish her victimhood bona fides she has to fall back on graffiti.

Nonetheless, Schakowsky chimes in with a claim that is part accurate and part Leftist victimhood fantasy:

“For over a decade we have seen increasing incidents of violent Islamophobia both in the U.S. and worldwide — from the genocide of the Rohingya in Burma, and Uyghurs in China, to the attacks on Muslim refugees in Canada and New Zealand. It is past time for the U.S. to establish a comprehensive plan for combating this hatred worldwide. I am proud to join my friend and colleague, Congresswoman Ilhan Omar, in introducing the Combating International Islamophobia Act. This critical legislation will create a Special Envoy for Monitoring and Combating Islamophobia to ensure the U.S. dedicates the resources necessary to safeguard human rights and religious and cultural freedom around the world.”

All right. But will this Special Envoy for Monitoring and Combating Islamophobia note the large number of faked anti-Muslim hate crimes? Will this Envoy make a clear distinction between the two quite different ways the propaganda neologism “Islamophobia” is used? The term “Islamophobia” is an illegitimate conflation of two distinct phenomena: crimes against innocent Muslims, which are never justified, and honest analysis of the motivating ideology of jihad terror, which is always necessary.

Islamic advocacy groups and their leftist allies have been insisting for years that such analysis, too, constituted “Islamophobia.” Omar and Schakowsky speak of Islamophobic violence, but if this Special Envoy is created, he or she will without any doubt crack down on any honest discussion of how Islamic jihadis use the texts and teachings of Islam to justify violence and oppression, because for years such discussion has been labeled “Islamophobia” along with real acts of anti-Muslim bigotry.

The Special Envoy would just be another agent in the Left’s escalating war against freedom of speech, silencing opposition to jihad violence and Sharia oppression of women, and thereby enabling unarguably sinister forces. Don’t tell me you’re surprised.