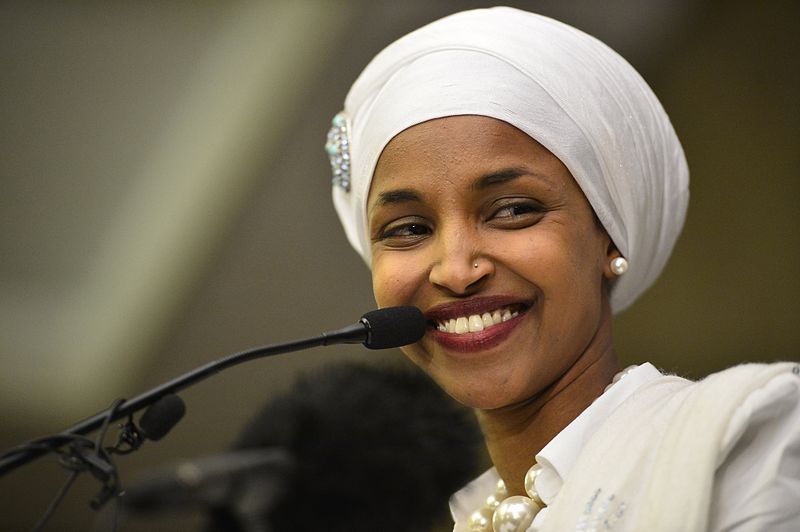 (True Conservative Pundit) You just can’t make this stuff up. Omar demanded in the past that President Trump release his taxes, while Omar kept her own hidden. Now why would she do that? Because Omar committed tax fraud, not once, but multiple times. She also accepted illegal payments from institutions she spoke at that she as part of her congressional duties helped to oversee.

Ilhan is reportedly being investigated for immigration fraud, marriage fraud, and attempting to defraud a higher learning institution according to David Steinberg.

It is also reported that Omar made illegal payments to political consultant Tim Mynett, who she cheated on her husband with, and who (Mynett) happened to be married at the time.

Omar was even arrested in 2013 for trespassing, and in her “mug” shot she is smirking. Typical Leftist, Omar regardless of actions believes she will get away with it, and so far she has done just that.

So we have a felon serving as a Congresswoman. How’s that again???

As I have written, @IlhanMN likely committed a remarkable number of additional felonies due to her fraudulent 2009-2017 marriage.

Today’s report appears to confirm the worst of them: @IlhanMN may have filed EIGHT YEARS of fraudulent federal and state tax returns. (2/x)

Adding to all this, Ilhan Omar without even blinking an eye married her own brother.

According to The Daily Mail, it is now no longer a rumor; the paper is in fact confirming that Omar DID marry her brother. Why? So he could go to school in Minneapolis.

How about this gem – Ilhan Omar, may not even be her real name!

According documents and sources previously reported by investigative journalist David Steinberg, Congresswoman Ilhan Omar married her own brother in order to defraud US immigration.

In fact, evidence is mounting that Ilhan Omar isn’t even her real name!

Omar is a real gem, and as I previously wrote, “Ilhan Omar and the ‘The Squad’ are Dangerous Enemies of America and Need to be Removed from Office.” Ilhan is also a strong supporter of Islam and Sharia Law – Islam and Sharia Law are most definitely NOT American. Omar is also anti-Israel, as well as being a strong Leftist.

No, Ilhan Omar definitely does NOT have America’s best interests in mind, she has her OWN interests in mind, and that of Islam; Islam I want to remind my readers seeks to dominate the world, to control it, not assimilate. Don’t forget that.

One last thing, Omar the lover and defender of America: Omar has no problem whatsoever condemning President Trump every chance she gets, yet she cannot or will not condemn Al-Qaeda. Let THAT one sink in.

Ilhan Omar is a criminal, and criminals belong in jail, not in Congress.

Read my three most recent articles:

Let’s all continue to fight political correctness, indoctrination, Leftist propaganda, liberalism, and keep sharing the truth – knowledge is power. Until next time…