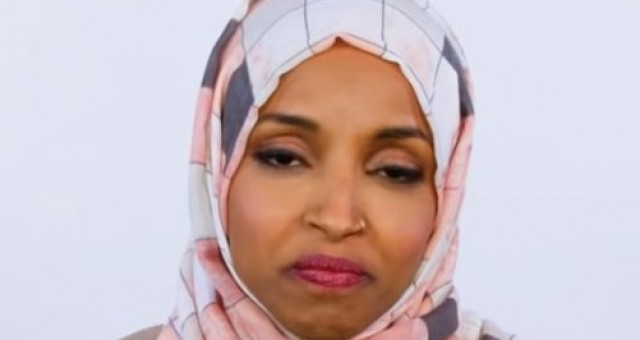 Rep. Ilhan Omar (D-MN) touted her intersectional oppression in a recent interview with the New York Times, lamenting that she constantly has to “deal with the hate of anti-Muslim, anti-immigrant, anti-blackness, but also with sexism” in the United States.

Omar made the remark when asked about a controversial passage in her autobiographical book — This Is What America Looks Like: My Journey from Refugee to Congresswoman — in which she wrote: “I am, by nature, a starter of fires. My work has been to figure out where I’m going to burn down everything around me by adding the fuel of my religion, skin color, gender or even tone,” Breitbart reports.

If our nation was truly as horrific as she claims it is, one must question why she chose to even move here then as a refugee in the 90’s. A step further would have to ask if our nation is so racist and anti-Muslim as she claims, how did she get elected into congress.

Omar is the first Somali-American member of Congress, the first woman of color to represent Minnesota and one of the first two Muslim women ever elected to Congress.

“Couldn’t that kind of language be interpreted as a form of demagoguery?” the Times asked.

It’s metaphorical. There are many times when people will say, “Something you said has agitated this space.” And it’s like, no, it’s me just showing up that did it. There are times when I will choose to not show up, because I know that my presence brings about intensity that isn’t going to be helpful. There’s no one else that exists in a space where they have to deal with the hate of anti-Muslim, anti-immigrant, anti-blackness, but also with sexism. People will say it’s my “tone.” I’m like, you’re agitated by my tone because you think people like me should be sitting in a corner, not heard and not seen. Everything that comes out of my mouth is going to be filtered through the lens of you despising my existence.

It is amazing that certain politicians refuse to see that their own actions have proved who they are and what they stand for. Her own twitter account she tweeted to continue the “protesting” in our nation instead of calling for the end of violence.

Speak out. Protest. Vote early. And join me in putting the pressure on Mitch McConnell by demanding the Senate wait until after Inauguration Day to vote on a Supreme Court nominee: https://t.co/knKhuMK5tb

Tell the Senate: No Supreme Court confirmation until inauguration!

“Ruth Bader Ginsburg’s dying wish was that the Senate not replace her on the Court until a new president is inaugurated. As Mitch McConnell dishonors her memory and contradicts his past statements by pledging to move forward with a confirmation vote on a nominee before the election, we must mobilize to demand that the Senate waits until after the next inauguration.

Add your name next to mine to demand that the Senate wait to vote on a nominee until the winner of November’s election is inaugurated.”

In March, Omar claimed that American power comes from racism and that “our history is built on the oppression of black bodies.”

Our history, our nation, has been been built on those who have served our nation and volunteers who have stood against tyranny.

It is as if someone or some organization has turned 2020 into they year of racial overthrow. Maybe, just maybe, this has to do with the fact that President Trump is white and the democrats have pushed the global company Black Lives Matter into the forefront and encouraged more riots and looting.