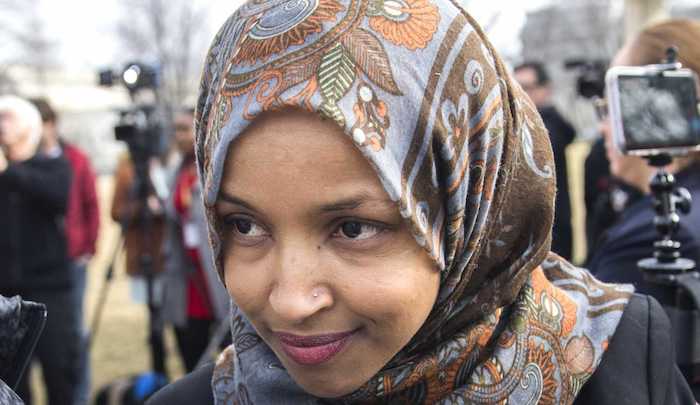 It’s a fine thing to be a member of not one, not two, but three protected victim classes: that most ardent of patriots, Rep. Ilhan Omar (D-Jihad), has now directly violated the oath of office she took when she became a member of the House of Representatives, but because she is so multiply victimized, nothing will be done.

It all happened Tuesday, when the Left’s brightest young star said that her colleagues’ latest treasonous cause, defunding the police, would not be enough: “We can’t stop at criminal justice reform or policing reform for that matter. We are not merely fighting to tear down the systems of oppression in the criminal justice system, we are fighting to tear down systems of oppression that exist in housing, in education, in health care, in employment, in the air we breathe.”

Those “systems of oppression” that need to be torn down, in her sage view, include “our economy and political system.” Omar continued: “We must recognize that these systems of oppression are linked. As long as our economy and political system prioritize profit without considering who is profiting, who is being shut out, we will perpetuate this inequality. So we cannot stop at criminal justice, we must begin the work of dismantling the whole system of oppression wherever we find it.”

The “whole system of oppression.” All right. But that is not exactly what Rep. Omar promised to be about when she became an officer of the United States government. Here is the oath Ilhan Omar took when she became a member of the U.S. House of Representatives: “I, Ilhan Omar, do solemnly swear (or affirm) that I will support and defend the Constitution of the United States against all enemies, foreign and domestic; that I will bear true faith and allegiance to the same; that I take this obligation freely, without any mental reservation or purpose of evasion, and that I will well and faithfully discharge the duties of the office on which I am about to enter. So help me God.”

TRENDING: Biden: A Figurehead Proxy for His VP
take our poll - story continues below

This is a quite clear-cut case. Calling for the “dismantling” of the “political system” is the direct opposite of supporting and defending the Constitution of the United States against all enemies, foreign and domestic. In a sane Congress, she would be expelled. The Constitution says: “Each House may determine the Rules of its Proceedings, punish its Members for disorderly Behaviour, and, with the Concurrence of two thirds, expel a Member” (Art. I section 5).

When a sitting congresswoman advocates for the dismantling of the entire political system, it ought to be easy to get two-thirds of the House to vote to expel her. Whatever this Congress may be, however, it is not remotely sane. Omar will not be removed from Congress; nor will she be censured or even rebuked. The House’s Democratic leadership already showed, when it failed to rebuke her for her open and repeated expressions of anti-Semitism, that it lacked the will to take any action on Omar that might alienate the lunatic Left that makes up so much of its constituency today.

Nothing whatsoever will be done. And that is because Ilhan Omar, a congresswoman enjoying the adulation of the establishment media and a huge segment of the American electorate, is, for all her perks, all her favorable press, all her adoring fans, a victim. With today’s dominance of identity politics, as a black person, a woman, and a hijab-wearing Muslim, Omar is thrice a victim, a member of three protected victim classes. As a result, she has an absolutely free pass to do anything she wants. We have already seen that with the fact that she has suffered no consequences, nor even been investigated, despite strong evidence that she has broken immigration regulations and other laws.

Just as America was never going to impeach Barack Obama, despite his multiple abuses of office, because of his status as the first black president, so now Omar has carte blanche to do whatever she wishes, knowing that anyone who tries to bring her to justice will be inundated with charges of “misogyny,” “racism,” and “Islamophobia,” and thereby ruined.

Nice work if you can get it. Ilhan Omar has gotten it, and she can keep it as long as she wishes – or at least until she gets her wish (if she does) and the political system is dismantled. At that point, she may find to her dismay in the ensuing chaos that her special status has vanished along with the system she so hated.