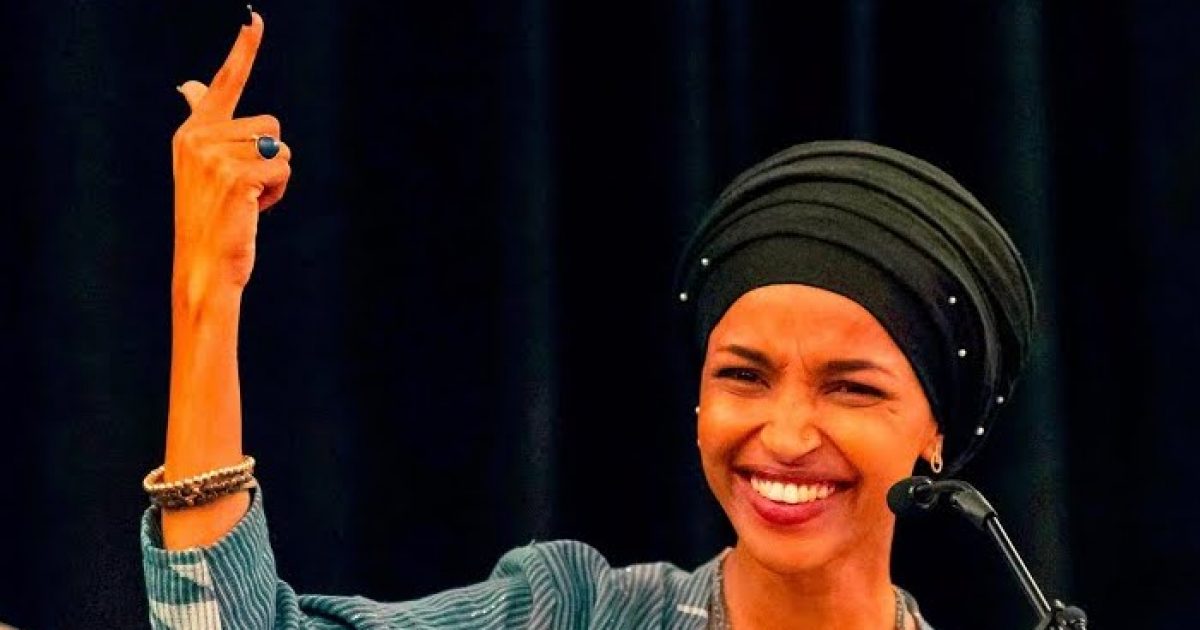 Muslim Rep. Ilhan Omar (D-MN) continues to thumb her nose at the American people as we continue to tolerate her wicked ideology of Islam and her clear anti-American rhetoric. In a series of tweets back in 2012, it was captured that she rebuffed those that called for Somalis such as herself to assimilate into the society and culture of America. Omar even went so far as to call the claim that American culture is based in “Judeo-Christian culture and law.”

Now, while I have some bit of problem with the term “Judeo-Christian,” I get the point that is being made and don’t really have an issue with that. The point is that American culture and society was based upon the Scriptures of the Old and New Testament, not the Koran, not the Book of Mormon, the Bhagavad Gita or any other religious texts, but the Word of God.

In understanding how America was founded and its laws written, one only need to look to the Mayflower Compact to understand the direction our forefathers set before us.

IN THE NAME OF GOD, AMEN. We, whose names are underwritten, the Loyal Subjects of our dread Sovereign Lord King James, by the Grace of God, of Great Britain, France, and Ireland, King, Defender of the Faith, &c. Having undertaken for the Glory of God, and Advancement of the Christian Faith, and the Honour of our King and Country, a Voyage to plant the first Colony in the northern Parts of Virginia; Do by these Presents, solemnly and mutually, in the Presence of God and one another, covenant and combine ourselves together into a civil Body Politick, for our better Ordering and Preservation, and Furtherance of the Ends aforesaid: And by Virtue hereof do enact, constitute, and frame, such just and equal Laws, Ordinances, Acts, Constitutions, and Officers, from time to time, as shall be thought most meet and convenient for the general Good of the Colony; unto which we promise all due Submission and Obedience. IN WITNESS whereof we have hereunto subscribed our names at Cape-Cod the eleventh of November, in the Reign of our Sovereign Lord King James, of England, France, and Ireland, the eighteenth, and of Scotland the fifty-fourth, Anno Domini; 1620.

However, watch as Omar demonstrates that it is not Somalis that need to assimilate into American culture, but that Americans need to bow to theirs.

A woman suggested that Somalis leave their culture at the door when they enter the US, and Omar replied:

totally disagree America is a melting pot of cultures. Our values is one of inclusion and acceptance!

The woman then replied to Omar:

As long as the law of the land is followed there will be peace and harmony. No rituals like honor killing

what does honor killing have to do with Somali culture?

Nothing to do with Somali Culture. Some people DO want to force there culture or beliefs on their hosts.

I am talking about American values that this Mayor doesn’t get. Somalis aren’t the problem, the mayor is!

those with problem don’t have a sense of culture & diversity. Being American means being yourself

As long as our AMERICAN culture is respected. That is based in Judeo-Christian culture and law.

Omar thumbed her nose at the claim:

Here are screenshots of the tweets. 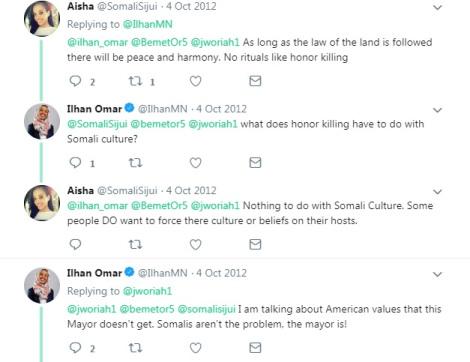 It’s these kinds of treasonous people that will be the downfall of the US if we don’t first repent ourselves and then start bringing justice against them. Why has she not been impeached, Minnesota? How many of you people there continue to support her? What about the rest of America? She influences us too in her position as a US representative.