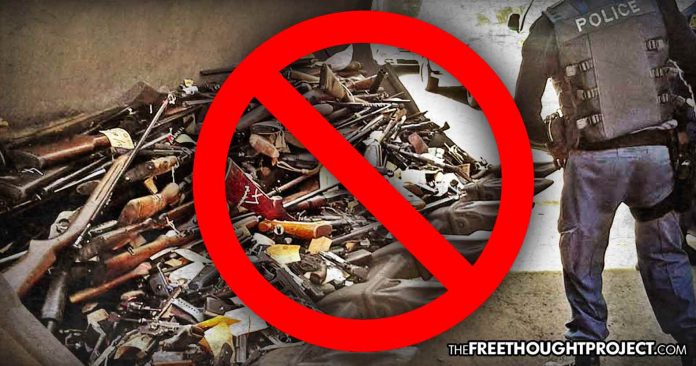 In February of 2018, after the tragic shooting in Parkland, FL, President Donald Trump took to national television to betray his oath to the Constitution and his supporters and famously said, “take the guns first, go through due process second.” While this was largely ignored by his base and downplayed in the media since then, that’s exactly what’s been happening. On Friday, Democratic Gov. Jared Polis signed one of the most controversial “red flag” gun confiscation bills into law. The silver lining to this tyranny is that sheriffs are refusing to enforce it and even willing to go to jail to resist.

As politicians and anti-gun rights activists continuously chant, “we don’t want to take your guns,” behind the scenes — in only a year — politicians have been working overtime to limit your right to bear arms.

In just the first six months after the shooting in Parkland and the president’s statement, the Giffords Law Center to Prevent Gun Violence recorded a whopping 55 new gun control measures in 26 states. That number is now far greater as states like Colorado pass “red flag” gun laws to literally do what Trump advocated for in Feb. 2018. They are taking the guns first and seeking due process second.

Colorado just became the 15th state to pass such a law and now Colorado citizens are subject to legislation which allow their guns to be seized without them having any say in it whatsoever.

Citizens who are targeted by the law will be deemed guilty first and only after their guns are taken, will they have a chance to defend themselves in court. This is the de facto removal of due process.

In spite of what officials and the media claim, when a person is stripped of their constitutional rights, albeit temporarily, without being given the chance to make their own case based on what can be entirely arbitrary accusations, this is the removal of due process. This is exactly what is happening in Colorado.

This new law is so egregious that even the National Rifle Association (NRA) is speaking out, despite their silence in the face of other “red flag” laws.

“Unchallenged statements made by a petitioner before a judge … would be sufficient for law enforcement to enter that person’s home and confiscate their private property,” the NRA said in a statement.

What’s more, the overwhelming majority of elected sheriffs in the state—50 out of 62—have been outspoken against this measure. According to Weld County Sheriff Steve Reams, this law also puts cops in danger because they’d be showing up unannounced to steal people’s guns despite no crime having been committed.

Other sheriffs have even gone on record stating that they are willing to go to jail rather than enforce the law.

“I’m willing to go to my jail for it, the only exception would be a totally extreme case and most sheriffs would agree with that,” said Park County Sheriff Tom McGraw.

Refusing to enforce an immoral law is the definition of what a good cop does.

“How many judges are going to send all the sheriffs in Colorado who are standing up to this to jail?” wondered Teller County Sheriff Jason Mikesell, who is among the sheriffs willing to choose jail over enforcement, according to CNN.

Despite the resistance from law enforcement, the bill’s head sponsor disagrees.

“This bill will give law enforcement and families the tools that they need to stop tragedies from constantly happening and save lives,” House Rep. Tom Sullivan (D) said.

Sullivan ran for state representative after he tragically lost his son in the Aurora mass shooting in 2012. While his son’s death is certainly tragic, laws like this one would likely not have prevented it.

Limbaugh’s case is important to bring up due to the fact that he was subject to California’s “red flag” laws in 2018. Limbaugh was given a high-risk assessment that ordered him to turn in his registered weapons to police, the only one being a Bushmaster AR-15. On November 9, Limbaugh turned in the weapon.

What’s more, there were already laws on the books that should’ve stopped Nikolas Cruz from ever getting a gun as well. But none of them worked.

Citing Cruz as the reason for advocating the erosion of the 2nd Amendment, the anti-gun activists are claiming he should’ve had his guns taken which would have prevented the tragedy. Sadly, however, they are ignoring the fact that he was accused of multiple felonies by multiple people—and should’ve never been able to purchase a gun in the first place—but law enforcement failed to act on any of it.

Now, Colorado citizens will be able to disarm their neighbors over a feud or send a swat team to an ex-husband’s home to take his guns over an argument—and all of it will be legal—due process and innocence be damned.