Will future Marine recruits get a participation trophy?

It’s no secret that very few lawmakers have military experience, either end of our Uniparty. Therefore, they know little about how their decisions actually affect military readiness, morale, or performance. 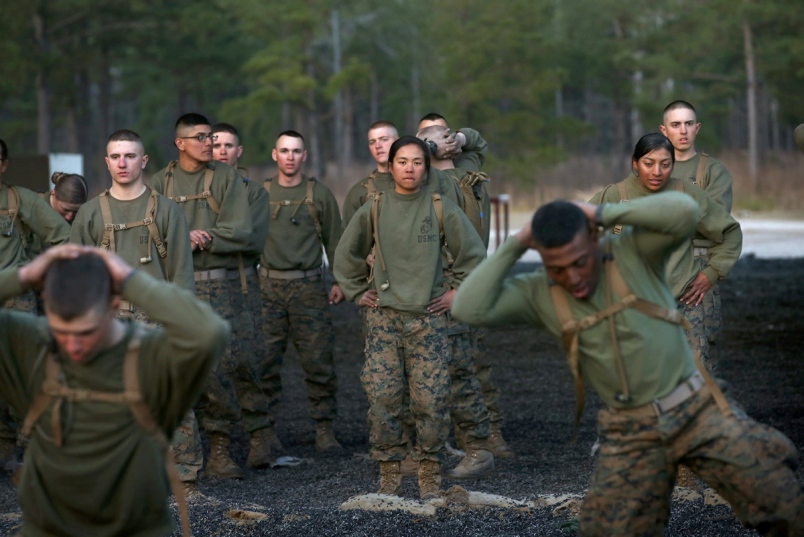 At least the Republicans are more receptive to advice from military leaders. But Democrats eagerly thrust themselves into the role of micro-managers, using our venerated military branches as Petri dishes for their social experiments.

A Marine’s Guide to SHTF Planning

Now, a left-winger congress-critter is forcing the Marines to integrate female recruits in with males at the platoon level during boot camp. Having personally tread the hallowed yellow footprints upon arrival at the USMC recruit depot, I have some first-hand experience on what it took to mold me into a bona fide Devil Dog. With the new “gender integration program,” both sexes will be cheated out of the best possible outcome.

The training environment is everything

In survival mode, one of the first things recruits notice is what happens to the weaker members of the herd (platoon). It’s an important lesson and one that motivates a recruit to not be singled out, to try harder not to be THAT sh^#bird. My boot training is a bit dated (1968), but I recall some colorful language accompanying the humiliation of weakness, language not normally used in the company of women.

Placing females (physically weaker in most cases) in with the male recruits during exercise and obstacle course drills will result in one of two things happening: the females will be singled out for criticism, or the standards will be lowered to a new normal. Can you guess which is most likely to happen?

Marine Boot Camp strips away a recruit’s former self, their immaturity, individuality, and their emotional soft spots, and replaces them with a rock-solid military persona that they will carry through life. More importantly, they will carry their new identity into battle. Recruit training is a glowing, white-hot forge that purifies. Every recruit who has endured that forge is immensely proud of their status as a Marine. The issue is, men and women recruits have always gone through different forges. The formula for producing a Woman Marine is different, tried and tested through time, and requires no “tinkering” by progressive dimwits who think footlocker is a shoe store.

If you cool the temperature of the forge with lectures on recruit-rights, or you mix in certain elements (in this case women) to the milieu, you will end up with an outcome that does no favors to either the male or female recruits. If you don’t believe me, read the comments by female Marines on this Facebook article.

If it ain’t broke

Later this year the Corps will be 270 years old, one year older than our nation. From their first amphibious assault against the British in 1776 to the Marines serving in combat today, the Corps has a proud tradition of striking fear in the hearts of our enemies and winning. The movement to degrade our military effectiveness is an old one. Using the threat of withholding funds, liberal politicians have done everything they could to change the formula that made our military successful. Has it been intentional, or was it just birthed out of ignorance? I don’t know the answer, so I’ll just go with the outcome, which is always bad.

This from the Marine Corps Times online article: “Rep. Jackie Speier, D-California, attached a provision to the newest National Defense Authorization Act, signed by President Donald Trump on Dec. 20, 2019, that requires gender-integration at both recruit depots…And though the Corps will still be allowed to have separate-gender squad bays ― where recruits sleep and shower ― with the passage of the 2020 National Defense Authorization Act the rest of training must be fully integrated down to the platoon level, according to lawmakers.”

Some Marines have taken issue with the President signing the 2020 Defense Authorization Act with this provision in place, but that is hardly fair. This legislation was authored in the Democrat-controlled House which dictates spending policies, and ratified by the Republican-lead Senate. What it does show is the importance to the military of keeping a conservative Republican majority over both chambers, and a pro-military advocate in the White House.

Congress-wacko Speier isn’t even willing to accept this small compromise: “for morning physical training, obstacle course attempts or entire company classroom study, men and women would be training side-by-side.” Her staff’s response to this reasonable accommodation tells you where their heads are: “That’s not actually gender integration,” a member of Speier’s staff told Marine Corps Times, adding that the new law will require the Marine Corps to go even further when it comes to gender integration”

By “going even further” they mean co-ed dorm arrangements. The Marines submitted a response outlining the negative impact Speier’s demands would have, but that was brushed aside and replaced by a demand to come up with a new study that would focus on the positive outcomes of the change. The Corps hasn’t responded back yet but will have to shortly.

Let’s not forget that this is the same Jackie Speier who was pushing Pelosi, way back last Summer, to get moving on impeaching President Trump, the military Commander in Chief.

The expense of making bathroom and sleeping accommodations co-ed will require funds to be shifted from military operations, possibly even pushing the USMC budget into the red. As some female respondents to the article noted, this puts the female recruits in a vulnerable environment, and will most certainly increase pregnancy rates, and STD’s.

All I can say is, General Chesty Puller must be rolling over in his grave!

FYI to patriots. Watch out for bogus online pseudo-military sites that spread misinformation. Here is an example of one that isn’t even located in the United States, and runs military articles with a strong liberal bias.

Cops You Don’t See On COPS: When “Law Enforcement” Fails To Uphold The Law & Actually Violates It (Video)