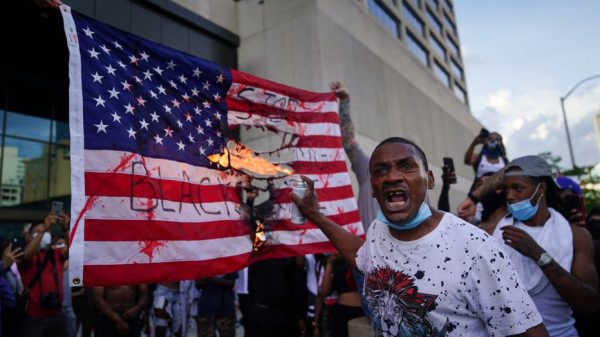 To Make America Great Again (MAGA) means letting go of the fear of being called a racist. That’s all they have.

WASHINGTON — Retired senior military leaders condemned their successors in the Trump administration for ordering military units on Monday to rout those peacefully protesting police violence near the White House.

As military helicopters flew low over the nation’s capital and National Guard units moved into many cities, Defense Secretary Mark T. Esper and Gen. Mark A. Milley, the chairman of the Joint Chiefs of Staff, publicly aligned themselves behind a president who chose chemical spray and rubber bullets to clear peaceful protesters from a park so that he could stage a photo op at a nearby church.

In so doing, Mr. Esper, who described the country as a “battle space” to be cleared, and General Milley, who wore combat fatigues on the streets of the capital, thrust the two million active-duty and reserve service members into the middle of a confrontation in which the “enemy” was not foreign, but domestic.

The reaction has been swift and furious.

Gen. Martin E. Dempsey, a former chairman of the Joint Chiefs of Staff, wrote on Twitter that “America is not a battleground. Our fellow citizens are not the enemy.” Gen. Tony Thomas, the former head of the Special Operations Command, tweeted: “The ‘battle space’ of America??? Not what America needs to hear … ever, unless we are invaded by an adversary or experience a constitutional failure … ie a Civil War.”

Adm. Mike Mullen, another former chairman, wrote in The Atlantic: “Whatever Trump’s goal in conducting his visit, he laid bare his disdain for the rights of peaceful protest in this country, gave succor to the leaders of other countries who take comfort in our domestic strife, and risked further politicizing the men and women of our armed forces.”

Television networks broadcast images of General Milley and Mr. Esper walking behind Mr. Trump as he crossed Lafayette Square on Monday evening to pose for a photograph while holding a Bible in front of St. John’s Church. Earlier in the day, Mr. Esper joined the president’s call with governors, saying, “We need to dominate the battle space” — a comment that set off a torrent of criticism.

More than 40 percent of active-duty and reserve personnel are people of color, and orders to confront protesters demonstrating against a criminal justice system that targets black men troubled many.

“Just like most of the Black Airmen and so many others in our ranks … I am outraged at watching another Black man die on television before our very eyes,” Kaleth O. Wright, the chief master sergeant of the Air Force, said in a Twitter thread, citing the names of black men who died in police custody or in police shootings. “I am George Floyd … I am Philando Castile, I am Michael Brown, I am Alton Sterling, I am Tamir Rice.”

Neither Mr. Esper nor General Milley knew when they went to the Oval Office on Monday that they would be taking part in the president’s photo op, Pentagon officials said. Nor did they know, officials said, that law enforcement personnel would be firing chemical spray and rubber bullets on protesters in Lafayette Square before they crossed that park with Mr. Trump.

During the meeting in the Oval Office, which officials said became heated, General Milley and Attorney General William P. Barr argued against invoking the Insurrection Act to override governors and send active-duty troops to states where there are protests. They were able to get Mr. Trump to hold off for now, but the president nonetheless ordered active-duty troops deployed to the one place where he did not have to go through governors: the District of Columbia.

After the Oval Office meeting, officials said, Mr. Trump said he wanted to review personnel who were deployed outside the White House. Along with a number of White House staff members, Mr. Esper and General Milley joined the president — and prompted outrage.

“Ridiculous. General Milley, who I respect, is embarrassing himself,” Michael McFaul, the former United States ambassador to Russia under President Barack Obama, said on Twitter. “I worked 3 years at the White House at the National Security Council. I never once saw Admiral Mullen come to the building ready for war.”

James N. Miller, who served as an under secretary of defense for policy under Mr. Obama and on the Defense Science Board until Tuesday, when he abruptly resigned, told Mr. Esper in his resignation letter that he believed the defense secretary had violated an oath to “support and defend the Constitution of the United States” because of his backing of Mr. Trump’s actions on Monday night.

The National School Boards Association (NSBA) considered urging the Biden administration to deploy the military to school board meetings to monitor threats against board members in September 2021, according to an independent review conducted by attorneys.

The NSBA sent a letter to the Biden administration Sept. 29, 2021 calling for the federal government to use anti-terrorism laws, including the Patriot Act, to treat violence and threats of violence against school board members as “the equivalent to a form of domestic terrorism and hate crimes.” However, in an earlier draft the NSBA called for the deployment of the national guard and the military police to monitor school board meetings before removing the language, according to the independent review of its decision to request federal authorities to monitor school board activities.

“[W]e ask that the Army National Guard and its Military Police be deployed to certain school districts and related events where students and school personnel have been subjected to acts and threats of violence,” the earlier draft of the letter said.

Days after the final NSBA letter was sent, Attorney General Merrick Garlandcalled on the FBI to use its authority against those who intimidate, harass or threaten school board members.

The NSBA walked back its letter in October and apologized after widespreadblowback over a public perception that the organization was attempting to target concerned parents who were protesting at school board meetings.

The NSBA did not respond to The Daily Caller News Foundation’s request for comment.

The violent protests erupting after a black career criminal George Floyd died of a fentanyl overdose on May 25, 2020 should have been greeted with the Insurrection Act by President Trump. Unfortunately, he allowed a coup to take place, and the power of the Executive Branch to be usurped by white guilt.

In 2021, white parents across the nation rose up against Critical Race Theory and the NSBA wanted to deploy the FBI, the National Guard, and Military Police against them, though not one act of violence was recorded against a school board member.

Ladies and gentlemen, there is no putting Humpty Dumpty back together again.