This, according to many conservative and independent media outlets, is proof that the coronavirus really hasn’t killed very many people at all. A typical headline comes from InfoWars, claiming, “CDC Admits Only 9,000 Have Died From COVID Alone.” The headline isn’t technically inaccurate, but it’s the InfoWars equivalent of CNN claiming, “Fiery but mostly peaceful protests took place.” In other words, it avoids mentioning the elephant in the room which is “excess deaths from any cause” as explained below.

Similar headlines have appeared on other indy media outlets that often get the numbers wrong when it comes to COVID-19, showcasing the continued problem with indy media publishers not having experienced scientists on staff who can properly interpret statistical data involving public health.

So where are they getting this wrong?

As a thought experiment, if a bomb were to explode in a nursing home, almost everyone killed by the bomb would have also had underlying health conditions. But that doesn’t mean the bomb didn’t kill them. Yet indy media outlets might run the headline, “Only 10% of those killed in the bombing died from the bomb alone.” That’s the equivalent of what they’re reporting right now, and it’s grossly misleading.

The loose argument of many media pundits today is that since people died with comorbidity factors, they weren’t really killed by COVID-19. That’s flatly false. The vast majority of people killed in a sudden event — such as COVID-19 — will die with other diseases already festering in their body. The reason for this is simple: People are very unhealthy and are both living and dying from multiple health conditions.

That shouldn’t be surprising to realize, given how many people are undergoing medical treatments for heart disease, cancer, diabetes, Alzheimer’s disease, liver disorders, obesity and other chronic degenerative conditions.

It would be absurd, in fact, to think that only “perfectly healthy” people are dying from COVID-19. That makes no sense for several reasons, the first of which is that there are almost no “perfectly healthy” people living in America when considering those over the age of 30. The vast majority of the entire population is diseased right now, so whether they die from motorcycle accidents, drowning or COVID-19, the vast majority of deaths will obviously involve people who had underlying diseases and comorbidity factors.

Those trying to claim the CDC data show “proof” that COVID-19 deaths are all faked are, in reality, only demonstrating their own lack of knowledge about human health and epidemiological data.

But that’s par for the course when it comes to COVID-19, it seems, where we now have a large number of independent media talking heads who, over the last six months, have declared themselves to be spontaneous experts in virology, epidemiology and genetics. The vast majority of these talking heads have zero credentials as an actual scientist, and they routinely misunderstand a long list of issues that are critical to a proper understanding of the coronavirus pandemic.

For example, right now nearly the entire indy media industry is convinced that the coronavirus PCR test uses a gene sequence that matches the same sequence found on human chromosome 8. This is a false conclusion that stems from a lack of understanding how PCR tests are conducted. If the claim were true, then obviously 100% of all COVID-19 tests conducted on humans would produce positive results. But that doesn’t occur. It turns out that the PCR test for COVID-19 doesn’t use just the 18 base pairs listed in the articles that are covering this subject. Legitimate PCR tests use hundreds of base pairs for genetic matching. (Although they still produce a lot of false positives, for different reasons.)

Sadly, the COVID-19 virus is now routinely called a “hoax” by conservative and independent media. This “hoax” designation asserts that the virus isn’t real and that no one has actually died from this coronavirus biological weapon. That’s utterly false information.

As the CDC’s excess deaths chart clearly shows, when you look at deaths from ALL causes, regardless of what the death certificates say, there are a considerable number of excess deaths that took place in the United States during the peak of the coronavirus pandemic. The orange line shows the boundary above which deaths are above and beyond what would normally be expected: 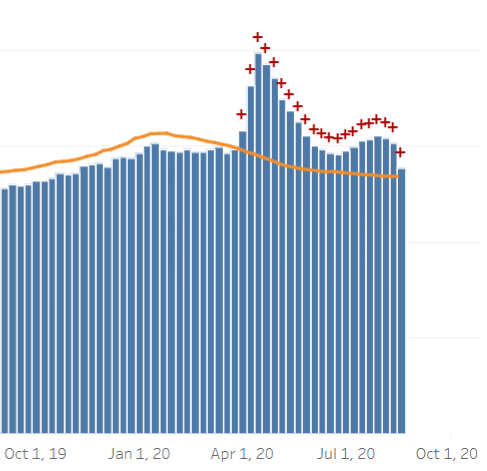 For the week of April 11th, for example, around 56,000 deaths would have been normally expected to occur (from all causes), but the number of deaths that actually took place was 79,000.

What was happening during this week? The coronavirus was running wild in New York City, while Gov. Cuomo was throwing elderly people into nursing homes that already had infected patients. Importantly, this wouldn’t have killed anyone if the coronavirus were a “hoax” as many indy media outlets are reporting. The virus can only kill elderly in nursing homes if it’s real, obviously.

So in just one week in mid-April, 23,000 excess deaths took place in the United States. And if you look at these excess deaths, you can see that the “official” death count from COVID-19 is actually on the low side, as many deaths that took place were not properly attributed to coronavirus infections.

Yet to this day, we still hear indy media talking heads claiming absurd things such as, “Nobody died from COVID-19.” There’s also the David Icke theory in all this, where Icke claims, essentially, “There is no virus.” These are absurd, false conclusions that only serve to mislead the public, yet they persist across independent and conservative media to this day, fueled by an almost cult-like obedience to absurd narratives that have no basis in fact.

In fact, if you add up the CDC-reported excess deaths from all causes in the United States of America, it turns out that 223,875 extra people have died in 2020 compared to what would have been expected. There is only one event in 2020 that took place which could reasonably account for all these excess deaths, and that event is the Wuhan coronavirus pandemic.

Of course, it is true that some of those deaths could be reasonably attributed to people being killed by ventilators and bad medical choices (especially in April), there is no denying that over 223,000 excess deaths have occurred in America.

This demonstrates that COVID-19 is not a hoax, but rather a deadly pandemic that has dwarfed flu deaths, which typically hover around 35,000 per year in the United States, according to the CDC.

Those who continue to call the virus a hoax are either scientifically unqualified, incompetent or deliberately dishonest.

The virus is real, but elements of the lockdowns and “cases” are definitely exaggerated or faked

Note that saying this does not make me a popular person in certain independent media circles, yet I cannot stand by and watch bad information continue to be spread by uninformed people without attempting to correct the record.

The coronavirus is real. It’s almost certainly an engineered biological weapon that was created to cause mass death. It either escaped from a lab in Wuhan or was deliberately released, and it was allowed to spread across the globe thanks to the WHO trying to keep all air traffic open while President Trump was trying to shut down air flights from China.

There are 223,000+ Americans dead who would have otherwise not died this year. That number will easily exceed 250,000 or possibly even 300,000 by the end of this calendar year. These are not inconsequential numbers, and the virus is not a hoax.

However, there are elements of the pandemic which are faked, or exaggerated or hoaxes. The skeptics of all this are correct in pointing out that the coronavirus “case” numbers are being absurdly exaggerated by false positive test results. They’re also correct that the coronavirus lockdowns are medically unjustifiable at this point, and it’s true that the Case Fatality Rate of the coronavirus has plummeted since April, likely due to viral adaptation. Thus, the virus no longer poses the same threat it once did, and it’s time to reopen society and end the punitive lockdowns.

There are elements of this pandemic that have been faked and rigged, but the overall existence of the virus — and its early deadly effects — are no hoax at all.

The globalists do intend to use the coronavirus pandemic to lock down and enslave humanity, probably followed by global death camps to reduce the human population, but remember: In order for their plot to work, they had to have a virus that really would kill people and subsequently set off the panic.

So the virus is real. Large numbers of deaths are real. But elements of the extended pandemic lockdowns are faked. That’s the truth about where all this stands right now.

Sadly, we don’t hear this important discernment from many people. What we get instead is a bipolar narrative where left-learning publishers claim the virus is exploding everywhere and will kill us all if we don’t shutter society, while right-leaning publishers say it’s all a hoax and no virus exists at all.

The virus is real, but elements of the pandemic are being rigged for political purposes (such as the dishonest “case” reporting, and the punitive, ongoing lockdowns which are no longer justifiable).

If we hope to navigate all this with a sense of confidence and honesty, we must learn to question the narratives of the independent media just as much as we question the narratives of the lying mainstream media. Because the indy media can, at times, fall right into the same “groupthink” that characterizes the dishonest mainstream media. And it’s important to not fall into that trap.

Across the board, critical thinking has collapsed in our society, and instead of individuals thinking for themselves, we now have “tribal” news narratives where one side of the political spectrum catapults lies and disinformation into the public space while competing narratives from the opposite side are flung with the same ferocity and utter abandonment of intellectual integrity. This creates noise, not knowledge. And it’s a great disservice to humanity.

Think for yourself. Stop falling for indy media groupthink that’s pushed by people who have absolutely no background in science or medicine. If we are going to survive this pandemic with a shred of human civilization remaining, we’re going to have to navigate through the disinformation and find the real, authentic truths in all this. And that’s what I’m trying to bring you each day, regardless of whether my information “fits in” with any particular narrative of the warring news tribes.

Watch Dr. Paul Cottrell explain where we really are right now with the coronavirus pandemic and testing protocols:

If We Are Experiencing Severe Shortages Now, How Bad Will Things Get When The Economy Starts Tanking Again?