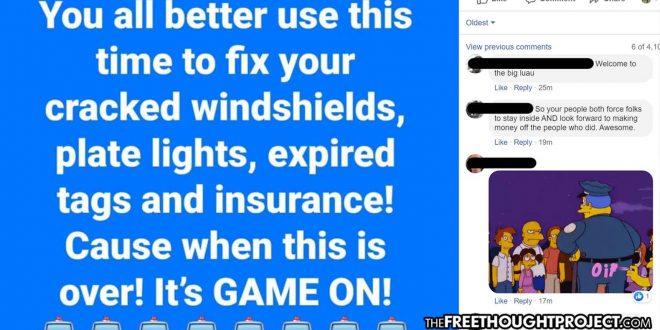 Burlington, IN — Beginning in March with the onset of COVID-19 restrictions, millions of Americans found themselves without a job. Since then, the United States has been experiencing record unemployment now on track to top 20 million new jobless claims this month. Simply put, Americans are struggling right now and the measly $1,200 stimulus checks don’t even begin to undo the damage caused by the lockdown.

One would think that during a crisis like this, police departments would promise to take it easy for a while in regard to issuing citations for victimless crimes like window tint, cracked windshields, license plate lights, or government mandated vehicle stickers. One would think that police could empathize with society and realize that struggling Americans may have to decide between renewing their license plate registration or feeding their children.

However, as a recent post from the Burlington Police Department in Indiana illustrates, one would be wrong. In a post to Facebook earlier this month, Burlington police took to threatening citizens, demanding they use this time to fix arbitrary victimless items on their vehicles like license plate lights — or else. The grammar-challenged post read as follows:

“You all better use this time to fix your cracked windshields, plate lights, expired tags and insurance! Cause when this is over! It’s GAME ON!

Naturally, this threat to immediately begin extorting citizens after one of the most trying times in human history, during record unemployment, didn’t bode well for police / citizen relationships. We couldn’t find a single comment in their post that showed support by citizens ready to be extorted for a burned out license plate light.

We did, however, find plenty of angry posts calling out the cops for such a callous and ridiculous display. One Facebook user, Vulpus Grey, summed up the Burlington police department’s post quite eloquently, saying:

use the time of the pandemic virus which is preventing you from leaving your home, in which many of you are hemorrhaging cash
and entering debt, losing your jobs, and surviving on government supplements or far less money that you had before the virus,
to spend more money, that you obviously didn’t have before,
to repair vehicles that you could not afford to repair when you where working full time
or the local gang, will use guns and kidnapping to ransom you for victimless crimes, plunging your entire family further into debt and making the aftermath of the entire disaster way worse than it needs to be,
so that my thugs will have some extra spending cash that they dont need because they are still making a full time salary through the pandemic, and get paid extra for working because of said crisis, which they are using as fuel for said ransoming.

Other folks used the post to call out the department for being more interested in revenue collection and extortion than solving real crimes.

Congratulations! This is the worst “cop threat post” i have ever seen! You redcoats and you’re victimless crimes. How about getting on those untested rape kits and show these people that not all cops are threatening tyrants out to ruin people life’s because they hurt you’re feelings even though you all are.

It is quite shocking that the post is still up after receiving thousands of negative comments and reactions. The page has also gotten multiple one star reviews and they have yet to remove it. It shows just how detached from reality these folks are. Had they read the comments, perhaps they may have an understanding of why there is so much divide in this country. Sadly, however, as the following Facebook user points out, they have not.

If you guys are actually reading the comments. Maybe you now understand how fed up with policing actions in this country the people are. We see you as nothing more than municipal fund raising brown shirts.

If you ever had a doubt as to the main goal and mission of police departments, this post should sum it up. They are here to collect revenue through the enforcement of victimless crimes. And no, this revenue collection does not make you safer. As TFTP has reported, if officers actually deterred people from these victimless traffic infractions like a broken license plate light, driving without a seat belt, or having dark window tint, they would be hitting themselves where it hurts the most — the bank account.

This is the problem with the model of policing in America. Local officials and police departments are dependent upon the revenue they collect from enforcing victimless crimes like seat belts, window tint, arbitrary inspections stickers, and other “infractions.”

If they were to stop extracting revenue from the citizens, they would lose a large chunk of their funding.

It is important to point out that driving faster than the flow of traffic on the roadway is dangerous and reckless. All too often, some idiot in a hurry loses control and ends up hurting an innocent party. The same goes for distracted drivers who pose a danger to other motorists.

That being said, however, the idea that police can stop people from acting like idiots on the roadway by extorting every single person they see talking on a cellphone or not wearing a seat belt is nonsense. If it actually had any effect at all, the tens of millions of speeding tickets and other traffic tickets issued every year, would have curtailed this practice by now. But it does not.

The total number of speeding tickets paid each year $6,232,000,000 which breaks down to around $300,000 generated per police officer for speeding alone. Tack on seat belt violations, license plate lights, window tint, rolling stop signs, and expired state-mandated documents and that number sky rockets.

Police, we are told, are here to keep us safe and protect us from the bad guys. However, as this post illustrates, public safety, all too often, takes a back seat to revenue collection. Time and time again, the Free Thought Project has exposed quota schemes in which officers were punished for not writing enough tickets.

While most everyone in America commits the same infractions designed for revenue collection, most of the people targeted by police for these crimes are the poor, minorities, and the mentally ill.

For those too poor to pay their tickets, routine traffic stops end up in repeated imprisonment due to mounting fines. People get trapped in the system and unless they can come up with the thousands of dollars to get out from under these fines, they will likely end up back in that system — over and over again.

Revenue collection, persecution of the poor, and these debtor’s prisons take place in every county, in every city, across every state. However, this institutionalized cruelty is little more than a day’s work for the millions of bureaucrats involved in the racket.