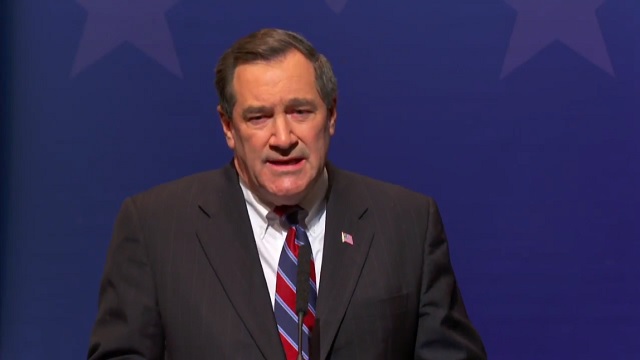 Democratic incumbent Senator Joe Donnelly wants Hoosiers to know that his staffers do amazing jobs despite being Indian-Americans and African-Americans.

While touting the diversity of his staff during the Indiana senate debate Tuesday night, Donnelly said, “Our state director is Indian-American, but he does an amazing job.”

“Our director of all constituent services, she’s African-American, but she does an even more incredible job than you could ever imagine,” Donnelly said.

Many noted the “odd phrasing” of his statements:

Can we just be honest and say that if Mike Braun had said this it would be an issue but it won’t because Donnelly is a Dem?

Followed up with: “Our director of all constituent services, she’s African American. But she does an even more incredible job than you could ever imagine.” https://t.co/xVttn2xohW

Democrats, who would have lost their minds if Republican challenger Mike Braun said the same thing, literally begged left-wing journalist Yashar Ali not to make a story out of it:

begging here- leave Donnelly alone. We are knee deep in overt racism here in Indy with concervative, homophobic, undereducated voters. We don't have the luxury of a BETO option. I hope we can raise the bar someday, but Nov 6th isn't it.

Omg my sentiments, too. PLEASE don’t push anyone to Mike Braun with this tweet. PLEASE!

I don’t think it’s even a mild exaggeration to say these exact same posters would say Mike Braun is “literally Hitler” and a “white supremacist neo nazi” for making the same statement. It really just goes to show this PC garbage is purely a one-way street.

While Donnelly had a huge lead in the polls several months ago, after backing the witch-hunt against Judge Brett Kavanaugh and voting against his nomination he lost his entire lead and in the latest poll he’s trailing Mike Braun by three points.

The momentum is on our side, and with hours to go until the final #INSen debate another new poll has us leading the race. Find out where to vote today at https://t.co/F5WQMfByFg #IBackBraunhttps://t.co/D2tG0JMrZt