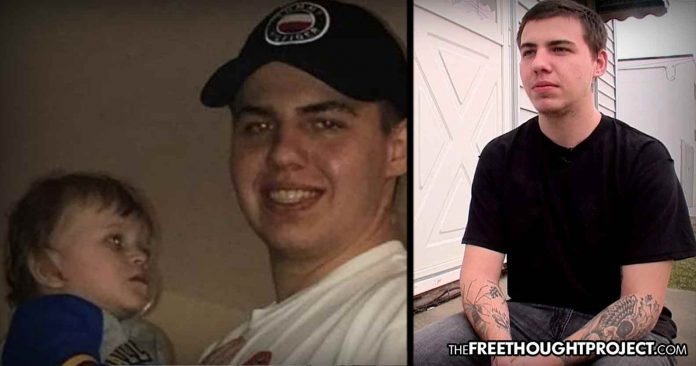 Eastlake, OH — The internet is raging with anger this week and police are feeling the heat over the arrest of Richard Adams. Adams was arrested and charged with felonious assault over the weekend when he physically attacked a 17-year-old who he allegedly caught raping a 5-year-old boy.

According to police, Adams walked into the living room of the home and saw the 17-year-old on top of the child with the child’s pants around his ankles.

Adams said he immediately yelled for someone to call the police, but felt compelled to step in and stop what he saw going on.

“I didn’t just call the cops and let it pursue. I stepped into action and stopped it,” Adams said.

According to News 5 Cleveland, Adams said he couldn’t stop from physically ending the assault because it hit close to home. He said that he had an experience similar to the 5-year-old when he was a child.

His uncle told News 5 that Adams blacked out after remembering the time when he was molested as a child too and continued his assault. Adams agreed that this is what happened, but says he shouldn’t be arrested for it.

Indeed, he is correct by any moral standards. Helping those who cannot help themselves is an obligation many feel. What was Adams supposed to do when he saw a 17-year-old raping a tiny child? Was he simply supposed to yell “stop” and then wait 15-20 minutes for the police to show up? At what point do you stop fighting with someone when you catch them raping a child?

Had Adams kept beating the person after the 17-year-old was unconscious or incapacitated, then there is grounds for questioning it. But we do not know if this happened.

After Adams spoke out about the unjust nature of his arrest, the Facebook page belonging to the Eastlake police department was inundated with criticisms and anger. Some people have offered to pay for his legal services while others are calling him a hero.

“In a world where now evil is good and good evil, they (eastlake) are going to make an example of this young man and totally ruin his life while this pervert basically gets a slap on the wrist. What a sick world we now live in. I feel sorry for this young man and the five year old child who had to endure such a heinous act against him,” wrote one Facebook user.

In response to the overwhelming influx of negative feedback, the police department issued a statement on the Facebook page yesterday.

“We have received numerous e mails, phone calls and communications in which people have expressed their emotions and frustrations with the recent case that we had involving the investigation of a rape of a 5 year old and the assault of the accused 17 year old male,” the post states.

” The 20 year old male accused of assaulting the 17 year old has been out on a personal bond since the day after the incident and has been assigned a court date,” the department wrote, noting that the 20-year-old man was arrested, but said nothing about the fate of the alleged pedophile.

However, TFTP has found that the teen was charged with the rape of the 5-year-old boy.

“We truly understand the interest, passion and concerns with this type of case,” the post continues. “It has been processed by the court and will continue to go through the system. Most of the people within our police departments, courts and the entire justice system have families of their own and the men and women are diligently working to ensure that everything is done correctly so that justice is served.”

The post concludes: “To attack people within the system to achieve a certain outcome is not what justice is about. We appreciate the impact that this story has had on the community and beyond but we expect people to be civil in expressing their disagreement and/or support of what has and will take place.”

People have started a GoFundMe campaign for Adams which has already raised $30,000 of its $35,000 goal. If convicted of the charges, Adams faces 2-8 years behind bars. As TFTP has reported, pedophiles often receive far less time, especially if they are police officers.