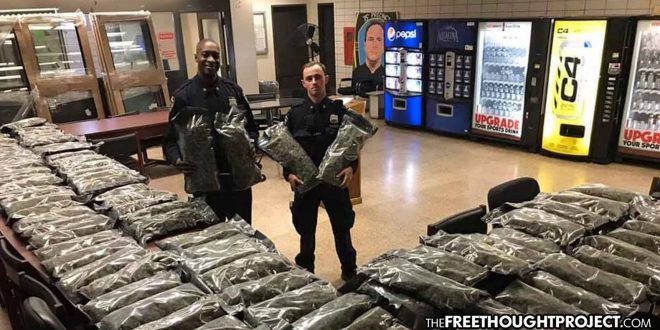 New York, NY — Despite marijuana being legal in some form in over half the country, police officers across the country still take pride in kidnapping, caging, and even killing people they catch with this plant. Despite a major majority of Americans supporting legal weed, cops still go out of their way to prosecute people for possessing it, even CBD. The ridiculous nature of depriving people of their freedom over a plant came to a head this week in New York after “hero” cops took to bragging about a massive “marijuana” bust. But because these cops were so gung-ho on arresting people for a plant, they are now the laughing stock of the internet after they bragged about seizing 106 pounds of entirely LEGAL hemp.

The hemp was bound for a CBD dealer in New York who resells the highly beneficial product to cancer patients. This medicine would never make it to the cancer sufferers, however, because a FedEx driver, apparently indoctrinated by the see something say something campaign, saw the legal flora and called the police.

Despite the shipment having all the legal documentation and paperwork showing that it was legal hemp for CBD, officers with the NYPD’s 75th precinct confiscated it, laid it out, and took their trophy photo to blast out on the internet. It is amazing how many police department still continue to post pictures of pot busts considering they are met with backlash and ridicule every single time they do it. Nevertheless, they still did it.

“Great job by Day Tour Sector E yesterday. Working with FedEx and other local law enforcement, they were able to confiscate 106 Lbs. of marijuana, and arrest the individual associated with the intended delivery,” the NYPD’s tweet read.

NYPD News got in on the circle jerk too.

Officers Greenidge and Ganshaw from the @NYPD75Pct used precision policing and relentless follow-up, along with a great working relationship with @FedEx and other local law enforcement officials, to confiscate 106 pounds of marijuana that was destined for our city streets. pic.twitter.com/OnRyLsH90D

“I’m looking at it. It’s the stuff you see in movies,” Jahala Dudley, one of the owners of the company that grew the hemp told NBC5. “Like, these two cops are holding our hemp, like it’s an awesome drug bust! This is hemp!”

Cops apparently used the notoriously faulty field test kits to test the hemp, and predictably, it showed positive for drugs. As TFTP has reported, these kits are so notoriously faulty that we have seen people put behind bars for possession of things like drywall, glazed donuts, crackers, kitty litter, baking soda, cotton candy, bird sh*t, honey, and even milk. And, apparently, hemp.

“Industry hemp looks like real weed…It’s the same species of plant, it’s just the chemical compound is different,” Oren Levy, who sells hemp wholesale through his company GreenAngels CBD, said, adding his product was below legal federal limits for THC.

While this is certainly hilarious, it is no joke to the person who is sitting in jail for “trafficking” marijuana, nor the company, who says cops stealing their legal CBD product — intended for cancer patients — may very well put them out of business.

We cannot believe this will be our first official Facebook post. We’ve been working hard all summer to grow a CBD compliant hemp crop. We succeeded too; Our crop was “Non detectable” on delta 9 thc – compliant in Vermont, New York and federally. We paid for well-known, CBD-compliant genetics, did all we could to test the product through the growing season and once harvested. This shipment was 100% hemp. We shipped 106 lbs to our legitimate buyer and CBD-business owner in NYC and it was intercepted by the NYPD. This picture frustrates us and concerns us. Why are these officers showing off hemp as though it’s marijuana? Why are they not aware of the laws they are entrusted to protect? We are farmers, not criminals. Please share. And to all the hemp farmers out there, please be vigilant and be proactive.

“We have a limited product, a limited crop,” Dudley said. “This shipment will make or break the farm this year. If this sale goes through, we’ll be OK. If it doesn’t, we don’t break even.”

The NYPD has refused to release any information about the “bust” noting only that the “investigation is ongoing.”

According the NBC 5, Vermont agriculture officials said they contacted New York Agriculture Commissioner Richard Ball to make him aware of the situation, hoping he might help sort out the confusion.

Hopefully, this mess gets straightened out and the cops responsible for stealing a company’s product based on faulty information get reprimanded. Until then, we can rely on the internet to rake the 75th precinct over the coals for this lunacy. Below are some of the tweets the NYPD has received in response to their reefer madness. Enjoy.

It’s insanity. This is the one plant that’s helping people get off opioids, meth, and alcohol and these guys are parading around on social media like they just made a giant drug bust, while this is the thing that actually helps people get off drugs.

This is what happens when you never get over being unpopular in high school.

I’m glad I don’t live there!! NYC is crazy! Sure, let’s protect people from hemp, which makes fabric and paper, but let’s HURT people who aren’t getting what they need and have a legal right to. Hey police #YouServeUS

Prohibitionists harm more peaceful people than all other violent thugs combined. They should ALL be arrested, tried and imprisoned so they can’t hurt anyone again.

And last but not least:

This is why nobody trusts you