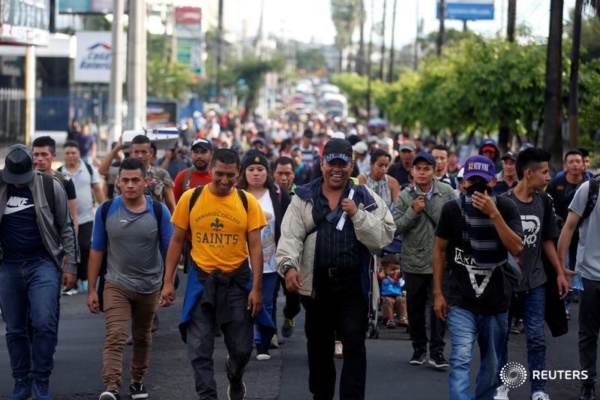 (Natural News) POTUS Donald Trump did two things last week that were vitally important for the safety and security of our country, as well as supportive of the rule of law.

He gave U.S. military forces deployed along the border with Mexico permission to use lethal force in support of Border Patrol and Customs and Border Protection agents attempting to keep thousands of migrants from crossing illegally into the country. And he said he would have no problem shutting down the entire U.S. border with Mexico if it meant protecting the integrity of our boundaries.

Is the president overreacting? Is this just him being a “bigot” and a “racist?” Hardly.

Developments over the weekend indicate that a growing number of mostly male, military-age migrants — who already number in the thousands with more arriving near the border all the time — plan to rush the border at various points in an attempt to overwhelm U.S. security and military forces.

This comes on the heels of an agreement reached between the U.S. and the incoming Mexican government under Andrés Manuel López Obrador to keep migrant asylum seekers in Mexico for the time being.

As noted by The Epoch Times, more than 5,100 mostly Honduran migrants are currently crowded into a migrant camp in Tijuana, Mexico, near the U.S. border in southern California. The news organization even posted a video of migrants in the camp who were lining up for food:

The line for food just outside the camp confines. Free meals are served at 10am and 5pm. There are 5,150 migrants now at the camp in Tijuana. pic.twitter.com/6BRcbcWRHg

“The line for food just outside the camp confines. Free meals are served at 10am and 5pm. There are 5,150 migrants now at the camp in Tijuana,” the news site tweeted.

Luke Rosiak, an investigative reporter for The Daily Caller, made the observation on Twitter that women and children are suspiciously missing from photos and videos taken at the camp.

But that’s not all. The Epoch Times is also reporting that organizers within the migrant camp are waiting until their numbers swell to around 20,000 when they will then rush the border and send a message to POTUS Trump “to open the gates” into the U.S.:

Honduran Marco Gómez, 26, arrived in Tijuana on the evening of Nov. 22, and slept under a bridge just yards from the El Chaparral pedestrian entrance to the United States.

Gómez said the plan is to wait until an expected 20,000 migrants arrive in Tijuana and then enter the United States en masse.

“We’ll stay together and be strong, and then move on to the U.S.,” he said, The Epoch Times reported. “Peacefully, like people going from one country to another. Marching.” (Related: Mexican officials confirm DHS report that criminals ARE part of migrant caravan.)

He, like scores of other migrant males, have refused Mexico’s repeated offers of asylum. In fact, Gómez and others have no plans to seek asylum in the U.S.; they want to simply cross illegally and meld into the population.

When asked about applying for asylum in the U.S., Gómez told The Epoch Times, “It’s a waste of time. It’s a process that takes months and years—it’s a long time.”

Frank Martinez, another Honduran migrant who is traveling with his father, also shunned asylum. “I personally and I know many people will attempt to do the same thing—it’s to cross illegally. I will enter illegally. Because we want a better life, and I’m in a hurry,” he said, adding he has refused Mexico’s offer of asylum.

POTUS Trump is working against incredible legal and political headwinds in his effort to uphold his oath of office to protect and defend the country. He should be supported by every American regardless of political affiliation.

It’s clear we’re being invaded. We have a right to defend ourselves.

Read more about the migrant invasion to the U.S. at InvasionUSA.news.