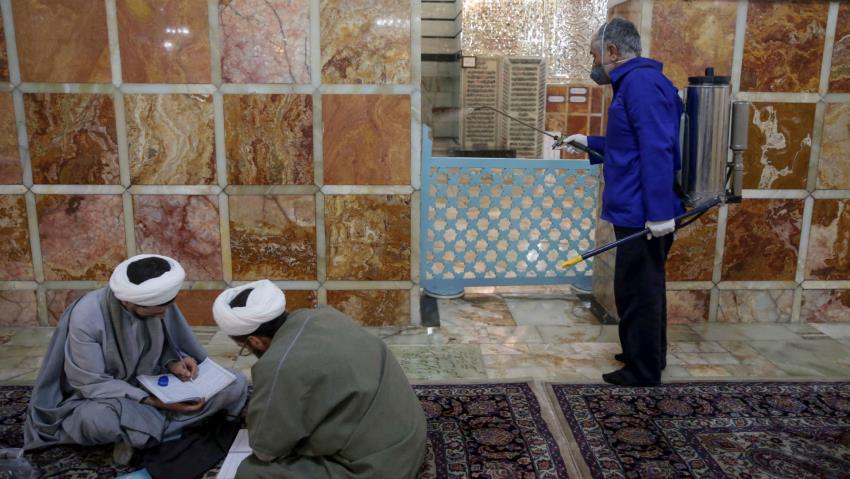 If an American preacher claimed putting lavendar on our butt cheeks would fight coronavirus, few would probably listen.

But Iran is different.

Iran is very much a theocracy, meaning that words from religious leaders are taken very literally.

So when a Cleric tells people to apply violet oil to their anus before bed, many will do just that.

It is unclear whether he told them to apply it to their anus or insert it into their anus as the tweet above claims.

A local cleric from the Iranian city of Qom has suggested a novel cure for the new coronavirus – the pre-bedtime rectal administration of violet leaf oil.Users on Twitter describe how the Ayatollah Tabrizian has publicly denounced Western medicine as “un-Islamic”.

In a post to over 120,000 followers on the social messaging service Telegram, Tabrizian, a purveyor of traditional Islam medicine, listed several alternative techniques for fighting the spread of the contagious disease, known as Covid-19.

According to an Iranian news site, which obtained a screenshot of the message, Tabrizian recommends consuming copious amounts of brown sugar, burning wild rue, as well as inhaling snuff.

His eighth tip is the most striking: “Before bedtime, drench some cotton in violet oil and apply onto your anus”

Ayatollah Tabrizian has written extensively on the essential oil, which he claims has miraculous, life-enhancing properties, such as the power to increase brain mass and reverse cognitive diseases such as Down’s Syndrome.He cites a tradition attributed to a 12th century Persian scholar, who described the remedy as an effective treatment for rhinitis, or throat mucus, if it was “the will of God”.Tabrizaei has called for more research into the oil, and believes its true potential remains untapped.

Qom, the city from which he hails, attracts millions of pilgrims every year and is home to a seminary which hosts large numbers of foreign religious students.

The holy city is now a hotbed of coronavirus in Iran.

BBC Persian say that implementing a lockdown by shutting down the city’s shrine would be a huge step for local clerics, who see it as the pride of the Shia Muslim world.

On Tuesday, Iran’s deputy health minister tested positive for the disease, as the Islamic Republic struggles to contain the disease, which has killed 16 citizens so far.

Iran and Italy have been hit very hard by Coronavirus.

The cultural differences between The Middle East and America are striking.

A quick recap… A Fatwah was issued ordering soldiers not to shave their lice infested beards.

Those were holy lice, sent from Allah.

Of course the Iranian strain is different and it is very dangerous.

The world is watching and if violet oil in the anus is what it takes, we will do it.