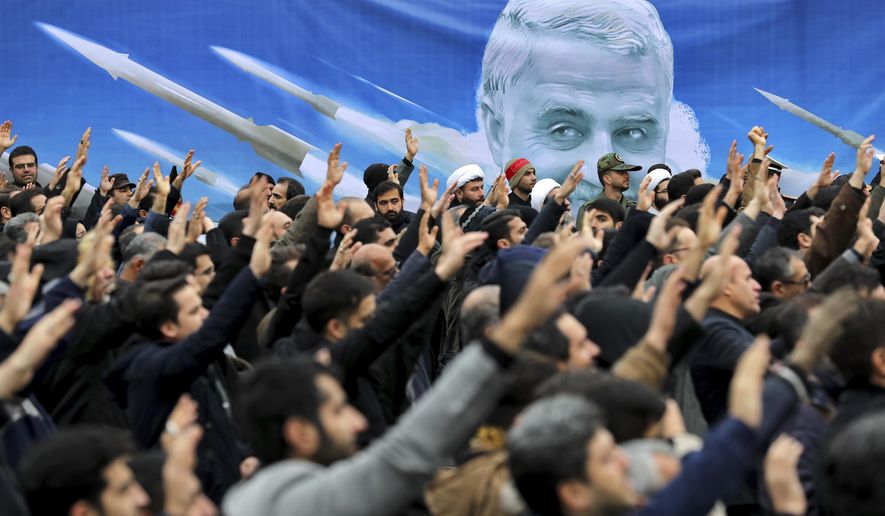 Before I proceed, don’t let pipe dreams carry you away to liberal la la land.

If you choose to try to collect this bounty you will be dead before you can say “Aloha Snackbar.”

$80 Million means nothing to a dead man.

And 80 Million Iranian Rial converts to about $1900 American.

I wouldn’t take a chance on lost translation libtards. 😉

wow, they sound a lot like the democrats here in America. No wonder democrats are apologizing to Iran. https://t.co/KfYGtl7HYR

Hundreds of thousands flooded streets Sunday in Iran to walk alongside a casket carrying the remains of a top Iranian general killed in a U.S. airstrike in Baghdad, a slaying one Iranian official suggested would see Tehran break further out of its unraveling nuclear deal with world powers.

Mourners beat their chests, wept and cried out carrying posters bearing the image of Revolutionary Guard Gen. Qassem Soleimani, the leader of its expeditionary Quds Force that organizes Tehran’s proxy forces in the wider Mideast.

The leader of one such proxy, Lebanon’s Hezbollah, said Soleimani’s killing made U.S. military bases, warships and service members spread across the region fair targets for attacks. A former Revolutionary Guard leader suggested the Israeli city of Haifa and “centers” like Tel Aviv could be targeted.

Meanwhile, Iraq’s parliament voted in favor of a resolution calling for an end of the foreign military presence in their nation, an effort aimed at expelling the 5,000 U.S. troops stationed there over the war against the Islamic State group.

Soleimani’s killing Friday escalated the crisis between Tehran and Washington after months of trading attacks and threats that have put the wider Middle East on edge. The conflict is rooted in Trump pulling out of Iran’s atomic accord and imposing sanctions that have crippled Iran’s economy.

Iran has promised “harsh revenge” for the U.S. attack, which shocked Iranians across all political lines. Many saw Soleimani as a pillar of the Islamic Republic at a moment when it is beset by U.S. sanctions and recent anti-government protests.

Retaliation for Soleimani could potentially come through the proxy forces which he oversaw as the head of an elite unit within the paramilitary Revolutionary Guard. Soleimani’s longtime deputy Esmail Ghaani already has taken over as the Quds Force’s commander.

The U.S. Embassy in Saudi Arabia separately warned Americans “of the heightened risk of missile and drone attacks.”

Read the Rest at Blazing Press…

If anyone thinks that it’s possible to behead President Trump then I have some Ocean Front property here is Missouri for sale, cheap!

This is just propaganda.

Don’t get your hopes up Kathy Griffin, et al…

The attacks on Israel may not be propaganda, but the success of such attacks would be questionable.

Israel is very well guarded and has proven time and time again that she can defend herself.

This is pure propaganda.

That is something that Iran is very good at.

With all of the talk of the nuclear weapons program they are developing, the truth is that Iran’s nukes are not like that of Russia or The U.S.

In fact, if the rubber band breaks as they attempt to shoot their missiles toward Israel, they might blow themselves up.

That was out of line I suppose.

But so are their comments.

America has more to fear from Iran’s allies than Iran itself.