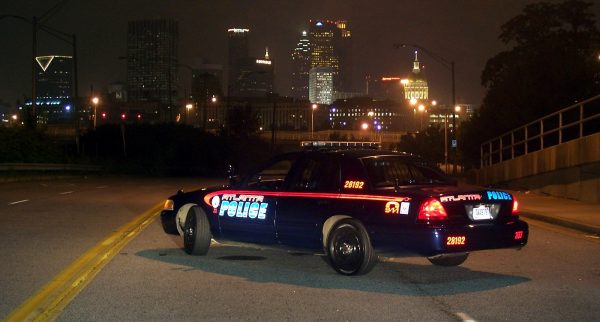 Atlanta is the Black Mecca. It’s a majority black city, though gentrification is civilizing once drug infested communities quickly, where criminality is almost exclusively a black vocation and avocation.

In 2018 Atlanta, the Atlanta Police Department’s Uniform Crime Reportshows blacks were 10 times more likely than whites to be arrested for homicide (no one has broken down these numbers before save your friendly neighborhood realist at SBPDL).

Shields cited the risk to the safety of the officers and the public for each chase, and “knowing that the judicial system is largely unresponsive to the actions of the defendants.”

This change comes after last month’s deadly crash during a chase that killed two men.

Channel 2′s Matt Johnson was at the news conference when Shield announced the changes.

“Please know that I realize this will not be a popular decision; and more disconcerting to me personally, is that this decision may drive crime up,” Shields said in a memo announcing the change. “I get it.”

While she noted that “an overwhelming number of crimes are committed where a vehicle is involved” and that significant arrests often follow zeroing in on a specific vehicle, other factors influenced the decision.<

“Namely, the level of pursuit training received by officers who are engaging in the pursuits, the rate of occurrence of injury/death as a result of the pursuits and the likelihood of the judicial system according any level of accountability to the defendants as a result of the pursuit. At his point and time, the department is assuming an enormous risk to the safety of officers and the public for each pursuit, knowing that the judicial system is largely unresponsive to the actions of the defendants.”

APD’s previous pursuit policy, which went into effect Sept. 15, 2018, allowed up to three police vehicles to join in a vehicle chase. Under that policy, officers were authorized to pursue a vehicle in one of the following situations: the suspect has a deadly weapon, the officer believes the suspect poses an immediate threat of violence to officers or others; or when there is probable cause to believe the suspect has committed or threatened serious physical harm.

All police officers involved in a vehicle pursuit must utilize their siren, flashing blue lights and headlights, the previous policy states.

But the department’s policy has come under scrutiny, along with other law enforcement agencies, when others are harmed or killed by the pursuit.

On Dec. 4, two friends and neighbors, Mark Hampton and Jermanne Jackson, were running errands, according to their families. Hampton had to pick up medication for his disabled son.

The two were killed when their car was hit by an SUV speeding through the intersection of Campbellton Road and Lee Street, according to police. Hampton was 43; Jackson was 44.</em

Two 19-year-old’s in the SUV had allegedly carjacked someone hours earlier, according to police. Both Marguell Scott and Emmanuel Fambro were charged with murder.

It’s so senseless,” said Hampton’s mother, Deborah Hampton, told The Atlanta Journal-Constitution days after his death. “It just seems like it’s a dream. A nightmare.”

Chris Rich, who has lived in Atlanta for about five years, was trying to make sense of the policy decision Friday afternoon.

“This is pretty drastic,” he said. “If I’m a criminal, it’s open season. It’s going to impact all the law-abiding citizens. It’s worrisome.”

He understands where Shields is coming from, though, and wishes the police department felt more support from other agencies. He knows several police officers and worries about morale.

“We’ve got these guys working hard, trying to make our streets safe, and then you’ve got this revolving door with these repeat offenders,” Rich said. “I just cannot understand why the mayor’s office is not putting more pressure on the DA’s office or the judicial system. There needs to be a unified front.”

Is crime the new black entitlement in America? In Atlanta, the city too busy to hate, perhaps police are now standing down to black criminality. In Buckhead, it’s already happening.

Now, it’s policy for the entire city.Law and and order is being retired to make life increasingly hospitable toward black criminality.