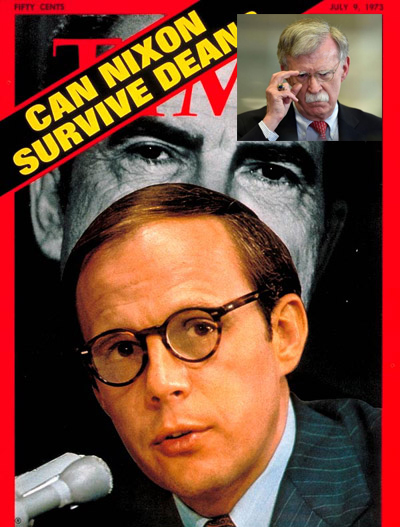 If you don’t remember your Watergate history, John Dean (Nixon’s trusted lawyer) set the president up for impeachment. His self-serving testimony was eagerly received by Democrats who loathed Nixon as much as today’s Dems hate Trump.

But, was Nixon guilty of conceiving, planning or engineering the cover-up of the Watergate burglary? Not if you read the transcripts and many books published on that topic. Nixon was as surprised as anyone.

Democrat Caught on Video Teaching Illegals How to Vote

The Democrat National Committee office that was broken into was a mistake. The real target was a DNC secretary’s office that contained a phone diary with possible dirt on John Dean’s girlfriend, and a DNC call-girl ring. Dean’s girlfriend was known to be involved in Washington DC prostitution. Dean needed to see if his girlfriend would be exposed by information in the diary, and he wanted it to use against the Democrats. Nixon was unaware of any of this. The burglars, including G. Gordon Liddy, were all former CIA operatives

The following statements regarding John Dean were written by Charles Burris, a Watergate sleuth who pored over hundreds of interviews and trial transcripts in order to track down the real culprits behind the break-in. You can find his article here.

“John Dean masterminded the whole Watergate affair, from the break-ins, the cover-ups and obstructions of justice, to ratting out Nixon, and emerging as the hero of the scandal.”

“Dean was a real jerk, a sniveling little coward, a weakling, a man who didn’t do his job as a lawyer for Nixon. In his testimony, he did everything in his power to appear blameless and a victim.”

“Dean actually dragged Nixon into a cover-up and discussion of hush money. He didn’t inform Nixon fully of what had happened and led him on. He didn’t have the guts or loyalty to tell Nixon what had happened in a timely way. He betrayed Nixon, while trying to save his own skin. Dean led Nixon on and got him in deep into a scandal not of Nixon’s making when he should have shielded him. Nixon didn’t order the Watergate burglary. John Mitchell is the one who signed off on it.”

Kushner And Bolton Undermine Trump On War And Immigration Policy

Will Bolton be the new John Dean?

John Bolton has a book to sell. He is no fan of President Trump, who fired him. There is even friction between the two men over that fact, with Bolton insisting he resigned and Trump saying the opposite. Bolton has an ax to grind with the people who got him fired. No big surprise that he supposedly names all of them as being in on the Ukraine scandal.

What kind of a witness would Bolton be? Would he seek to ingratiate himself with the very Democrats that hounded and ridiculed him as a “war-monger” for years? Or would he use the opportunity to hawk his upcoming tell-all book? We know he is eager to testify, and you can bet it’s as a hostile witness against the president.

Like Dean to Nixon, how much of the Ukraine strategy came directly from Bolton’s mouth to President Trump’s ear? Bolton was the National Security Advisor to the president. Will Bolton attempt to resurrect his professional reputation by throwing Trump under the bus for following his own advice?

According to the New York Times, the Bolton manuscript contains the following information: “[Trump] wanted to continue freezing $391 million in security assistance to Ukraine until officials there helped with investigations into Democrats including the Bidens.”

There is little doubt that the “disclosure” of Bolton’s book manuscript was not coincidental to Schiff and his surrogates (including anti-Trump Republican senators like Mitt Romney) demanding more witnesses. The manuscript for the book was supposedly under lock and key at the White House for a security review. Perhaps there was a burglary there!

We can bet that the manuscript leak if one actually happened, will be leaped on by MittRomney as he frantically tries to gather the three other never-Trump Republican senators to demand Bolton as a witness

It’s beginning to feel a lot like Watergate. Should we start calling the mystery whistleblower Deep Throat?