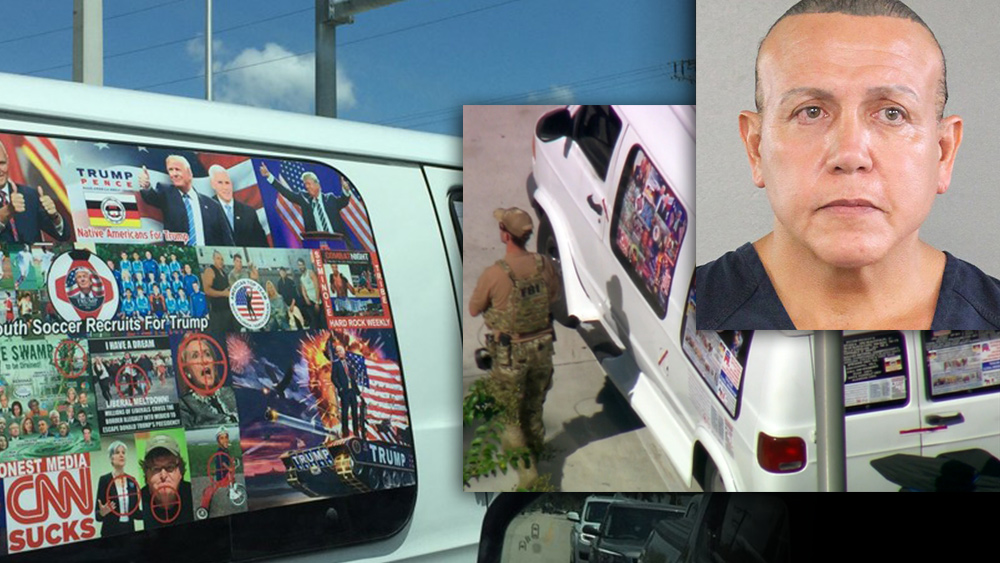 (Natural News) There is so much that doesn’t make sense regarding Cesar Sayoc, the so-called “MAGA bomber” who was arrested last week for allegedly sending a dozen or so fake bombs to prominent Democrats and CNN.

For one thing, the entire situation – a ‘huge POTUS Trump supporter’ sending suspicious packages to members of the opposition party – is too convenient, politically speaking. When the story broke, Republicans were surging in the polls thanks to the way Democrats trashed a good man, Supreme Court Justice Brett Kavanaugh, and the formation of a massive caravan of migrants heading for the U.S. border.

Throw into that mix the fact that Democrats have either called for violence against Republicans or have been virtually silent as Trump supporters have been accosted in public and attacked for the past two years, making it the “new normal” for the GOP.

Despite all of that, something happened after Sayoc was arrested that throws even more doubt onto the legitimacy of the charges against him, as well as entire narrative surrounding this incident.

As Information Liberation reports, shortly after Sayoc was taken into custody, NBC News reported that the suspect told police he “didn’t do it.”

“Under pre-Miranda (public safety exemption) questioning Cesar Sayoc told federal investigators he didn’t do it and would not say how many packages he sent,” NBC News’s Tom Winter said, citing reporting by WNBC investigative reporter Jonathan Dienst. “Post-Miranda he requested a lawyer and refused to talk.”

Winter’s report, posted Friday afternoon, differed from CNN’s, which reported Friday that Sayoc “told investigators that the pipe bombs wouldn’t have hurt anyone and that he didn’t want to hurt anyone.”

It’s important to note that not a single one of the dozen or so devices – which FBI Director Christopher Wray inappropriately called “IEDs” (improvised explosive devices) – actually exploded. That’s because they weren’t really designed to blow up. (Related: Fake pipe bomb hoaxer arrested; obvious signs of a CIA false flag operation to shift election narrative to blaming Trump supporters.)

In fact, as Mike Adams, the Health Ranger, reported:

Not only did these hoax pipe bombs contain mock timers crudely taped to PVC pipe; the timers had no alarm function, meaning they couldn’t even “theoretically” be used to detonate anything.

They were hoax props, in other words, not functioning explosive devices.

But the FBI is claiming no, they are (somehow) real “IEDs.”

As Information Liberation noted further, the device sent to CNN had an oversized digital car clock attached to it, but of course, such clocks have no alarm function – which is necessary to set it off.

There are more oddities besides just the timing and the bogus nature of the ‘explosives.’ Conservative Treehouse reported that the amount of prison time Sayoc could receive if he’s convicted (48 years), as announced by Attorney General Jeff Sessions, is also odd:

This is particularly curious given the very carefully worded statement from FBI Director Christopher Wray about the nature of the device(s): “energetic material that can become combustible when subjected to heat or friction.” While Director Wray went to great lengths to state the devices were “not a hoax”, if the device was an actual explosive device the charges for each of the incidents would equal a life-term.

Further, the terminology used by Wray regarding “energetic material” could mean just about anything from coffee creamer to any other powdered combustible.

Conservative Treehouse also pointed out something that Andrew McCarthy, a former federal prosecutor who specialized in terrorism/national security, made note of: If mailed devices were “functionally explosive” they would be considered “weapons of mass destruction” and would fall under federal statutes that were not cited (such as US 18 Code 2332a). Because the government did not charge Sayoc under these statutes, then that indicates the devices were not real explosives.

So the charges appear more political than practical.

There are other things that don’t add up as well. It will be interesting to see where this leads, but none of this suggests that POTUS Trump is going to lose a mass of supporters ahead of the 2018 midterms. This is all just too convenient.

Read more about other Democratic hoaxes at Hoax.news.