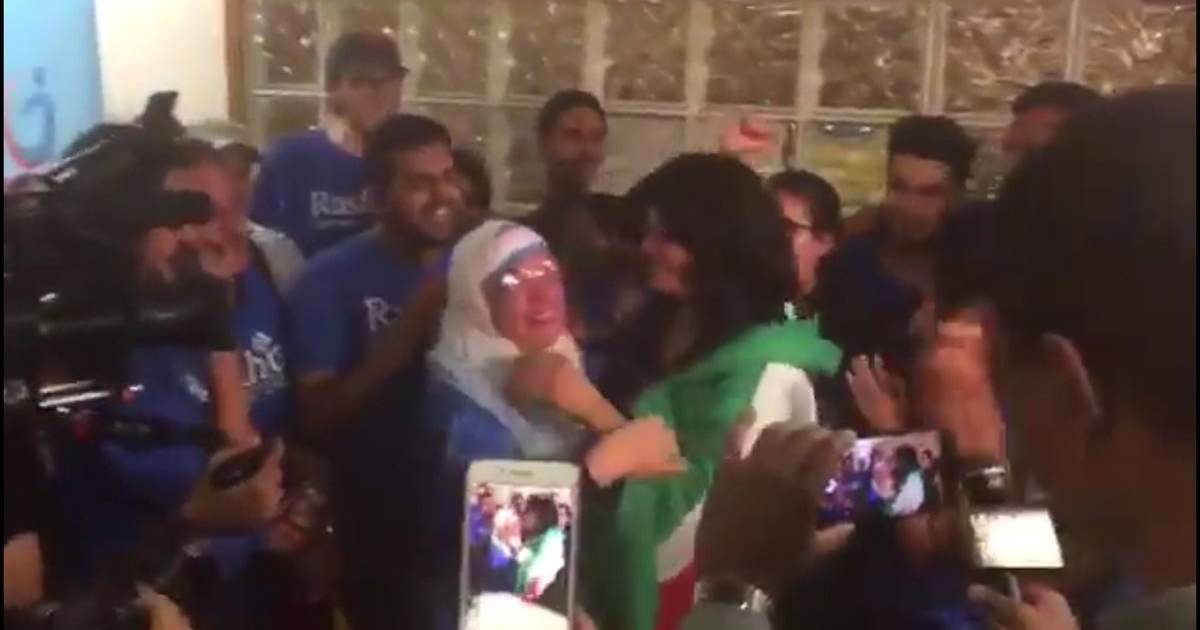 Like the illegal aliens that march into our country waving the country’s flag they are fleeing and demanding we service them and bow down to their demands, elected Muslims in the US are becoming increasingly emboldened by America’s tolerance. As I wrote about on Thursday, more and more Muslims are running for political office and more and more are actually winning. Among those elected on Tuesday was Rashida Tlaib, who stuck her thumb in the eye of every red-blooded American by celebrating while draped in the Palestinian flag.

The video comes courtesy of a sympathetic Muslim, who declares that we should “be inspired” by this woman.

Would I get out the Scottish flag of my heritage and march around if I were elected? Nope! And Scotland isn’t even a terrorist country!

But the Palestinians are based totally in terrorism and their founding documents call for the complete and utter destruction of the nation of Israel. I’m in no wise trying to validate Israel or defend them. They have the right to be there in that land and they have a right to defend themselves against Muslim jihadis that come from the Palestinians.

However, think about this, this woman is showing to whom she shows her allegiance. It is not to the American people she represents. It’s to Palestine. It’s to Muhammad. It’s to Allah. It’s to the Koran. It’s not to America or her people.

As was pointed out before by Robert Spencer:

Tlaib is a vociferous foe of Israel. With the Democrats now regaining control of the House, Tlaib is likely to be an energetic proponent of the new majority’s vendetta against the Middle East’s only democracy. The House is likely to do all it can to roll back President Trump’s pro-Israel polices, with Tlaib as well as Omar as becoming the public faces of the effort.

According to the JTA, when Tlaib was asked if she would vote against military aid to Israel, Tlaib responded: “Absolutely, if it has something to do with inequality and not access to people having justice. For me, U.S. aid should be leverage. I will be using my position in Congress so that no country, not one, should be able to get aid from the U.S. when they still promote that kind of injustice.”

What kind of injustice? Tlaib, of course, had nothing to say about the genocidal incitement against Jews and Israel that regularly features on Palestinian television. She did say, however, that she favors a one-state, not two-state, “solution” to the Israeli-Palestinian conflict: “One state. It has to be one state. Separate but equal does not work. I’m only 42 years old but my teachers were of that generation that marched with Martin Luther King. This whole idea of a two-state solution, it doesn’t work.”

Indeed it doesn’t. A Palestinian state would be a new base for renewed jihad attacks against Israel. But a “one-state solution” would be even worse, unless that state is the current State of Israel, but that is not the one state Tlaib has in mind. She is calling for an Israeli/Palestinian state that would not be a Jewish State or a homeland for the Jewish people, but a federation in which Palestinians would soon overwhelm Jews demographically. Progressive denial of their rights would soon follow: as I show in my book The History of Jihad From Muhammad to ISIS, there has never been a majority Muslim nation in which Jews enjoyed equality of rights with Muslims. Tlaib’s unitary state would be no different.

Frankly, I’m not a fan of sending our money to any other countries, including Israel, but I at least realize they have a right to exist as a nation, unlike the PLO, whose charter calls for Israel’s utter destruction. That is something that Tlaib supports.

Tlaib won right alongside another female Muslim in Minnesota, Ilhan Omar, a woman who married her brother.