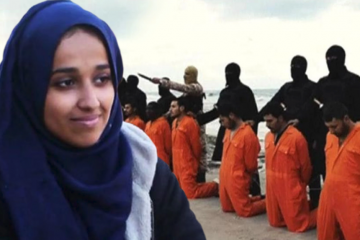 Hoda Muthana, bride of ISIS terrorists, seeks a Court’s decision: Whether Muthana may claim birthright citizenship, and if so, a right to return to the United States. After a hearing on March 4, 2019,” the Hon. Reggie B. Walton, District Court Judge denied Plaintiff’s “Motion for Expedited Consideration.” The decision concerns only the pace, not the merits, of the lawsuit.

This is a power play between the Courts, Congress and the U.S. President, whose first priority is security of citizens. The government’s policy should be to deny citizenship to, or a right of return by, anyone who provides material support to a terrorist organization.

A lawsuit for expedited relief, filed on February 21, 2019, seeks to compel the United States government’s assistance to facilitate the repatriation of a U.S. citizen from Syria.

Ahmed Ali Muthana’s status as a diplomat for Yemen terminated on June 2, 1994, at the United Nations, located in the State of New York. His daughter, Hoda Ahmed Muthana, was born on Oct. 28, 1994, and her birth was registered in the State of New Jersey. Each parent subsequently became naturalized U.S. citizens, and relocated to the State of Alabama. Hoda was issued a U.S. passport on January 24, 2005; and it was re-issued on February 21, 2014. Hoda traveled from the United States to Syria to join ISIS in November, 2014.

Hoda Muthana’s father seeks “a declaratory judgment finding that he will not be in violation of 2339B if he provides his daughter and grandson with financial support to aid their survival and return to the United States.”

Their attorney seeks a finding that “the U.S. government has an obligation to assist in the return of its citizens from areas of armed conflict, based on U.S. law regarding the rights of citizenship, applicable international law, and the United States’ own [sic] publically stated policies regarding the repatriation of American citizens.”

It is alleged that Hoda Muthana “is prepared and willing to surrender to any charges the United States Justice Department finds appropriate and necessary; she simply requires the assistance of her government in facilitating that return for herself and her young son.”

In its Memorandum, the U.S. government explains the officially recognized date of termination of diplomatic status of the Plaintiff, Ahmed Ali Muthana: “Settled law applied to the relevant events clearly demonstrates that Plaintiff enjoyed diplomatic-agent-level-immunity until February 6, 1995–after Muthana’s birth.”

“Thus, Muthana was not subject to the jurisdiction of the United States when she was born, by virtue of her parents’ enjoyment of diplomatic-agent-level immunity. So she did not and could not have acquired U.S. citizenship at birth. Because Muthana is not a citizen, every claim seeking relief for her fails.”

The “equities in this case defeat any claim for emergency relief—injunctive, declaratory, or mandamus—or for expedited treatment. Most fundamentally, Muthana’s own actions belie any claim for emergency equitable relief or for expedited treatment. The circumstances underlying the alleged need for expedited relief or consideration—Muthana’s alleged internment by Kurdish forces in Syria—are a result of Muthana’s own decision to travel abroad to join a foreign terrorist organization.”

Hoda Muthana’s passport was revoked because it was based on an error of citizenship: “Muthana was advised that she was not a U.S. citizen over three years ago—in January 2016—but she did not challenge that determination then and her father has waited until now to challenge it and to seek expedited treatment.”

“Muthana would have understood this unchallenged determination that she was not a U.S. citizen when she gave birth to her son abroad, and his circumstance is like that of any child born abroad to a non-citizen. To the extent that there are any plausible exigencies, they are of Muthana’s own creation.”

There is “no judicially enforceable duty of the United States to attempt to obtain the release of Muthana or her son—even if she were a U.S. citizen. Plaintiff’s request for an order of release from foreign military custody is far beyond any relief that could be ordered by a court.”

Hamas–CAIR, a terrorist organization, provided a pro bono attorney, so that Hoda Muthana, a Muslim woman who gave material support to terrorists, can argue her claim of entitlement to be admitted into the United States. Florida CAIR director, Hassan Shibly, compared forgiveness of Confederate soldiers to Hodi Muthana’s return, and retweeted a story from the Baltimore Sun.

Is Hoda Muthana a U.S. citizen? This argument reiterates the absurdity of alleged birthright citizenship by virtue of persons who subsequently sought permanent residency status.

Hoda Muthana renounced her citizenship, and decided to not return to the United States, as illustrated by Hoda’s intent to burn her U.S. passport. Hoda reportedly was the owner of a Twitter account on December 1, 2014; but the account subsequently was suspended:

Hoda Muthana supported ISIS’ pursuit of a Caliphate. Hoda was aware of the brutal violence and murder of the unbelieving Kufar. Her tweet includes Alhamdulillah: Praise be to Allah. 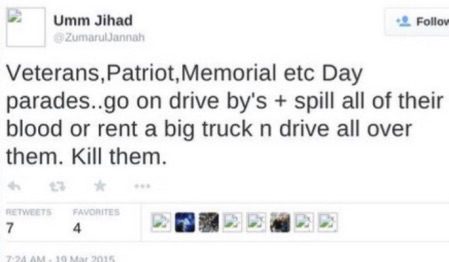 The allegation that ISIS had control of her account is disproved by her personal entries, including this tweet, dated March 18, 2015, concerning martyrdom: “May Allah accept my husband, Abu Jihad al Australi. Promised Allah and fought in the front lines until he obtained shahadah.”

Hoda Muthana willingly provided support, aid and comfort to ISIS. Muthana knew her role at least would be a bride, two or three times, to the Mujahideen, warriors of the faith. It is argued that, because Islamic Iddah requires four months between marriages, Hoda had several periods to reconsider her support of ISIS or any attempt to return to the United States.

Only due to ISIS’ failure to establish a Caliphate does Hoda Muthana want to return to the United States.

If Hoda Muthana returns to the United States, she should be charged with providing material support to a terrorist organization. If so, her defense counsel likely will attempt to negotiate probation, such as a speaking tour for moderate Islam. Yet, Hoda Muthana likely will not renounce the Islamic doctrine: (a) Convert to Islam; or (b) become a second class citizen and pay Jizya, a tax; or (c) die. If Hoda is sentenced to prison, will she promote Jihad to inmates? Will criminal justice reform be used to reduce her sentence? Will a Democratic President pardon her?

If Hoda Muthana and her child return to the United States, they likely will be subsidized by taxpayers: SNAP (food stamps); Medicaid; and other comforts. Have taxpayers learned a lesson from the Tsarnaev brothers? Hoda’s child likely will be educated by Imams to pursue Jihad. The child likely will avenge the father’s death, perceived to be caused by American infidels.

Middle East immigrants are not terrorists, just refugees: A better life sought by women and children. That argument was promoted by President Obama’s administration, whose immigration policy preferred Muslims over Jews and Christians, arguably the real persecuted minorities by Islamists.

In this case, defense counsel with a straight face tries to describe Hoda Muthana as a refugee from an area of armed conflict. Reality check: Hoda Muthana provided material support to ISIS, a terrorist organization, in this holy war.

Hoda Muthana subscribes to political Islam, whose goal is a Caliphate to rule over the entire Earth. Islamists demand submission by the unbelieving Kufar. If you dare to be an Islamic “denier,” your punishment is death under Sharia law. A moderate Muslim must confess this doctrine, or be an Apostate.

The United States was founded upon Judeo-Christian principles, and a republican form of government. Our Constitution’s Bill of Rights is inconsistent with Sharia law. Therefore, Islamists construe Americans as Kufar, and an enemy called the Great Satan.

Is the claim of remorse genuine by Hoda Muthana, or actually Islamic Taqiyya: Lying to Infidels? Is Hoda’s return actually subterfuge so that she can promote Jihad against Americans?

Security of citizens is the first priority of the U.S. President and Congress. The government’s policy should be to deny citizenship to, or a right of return by, anyone who provides material support to a terrorist organization.