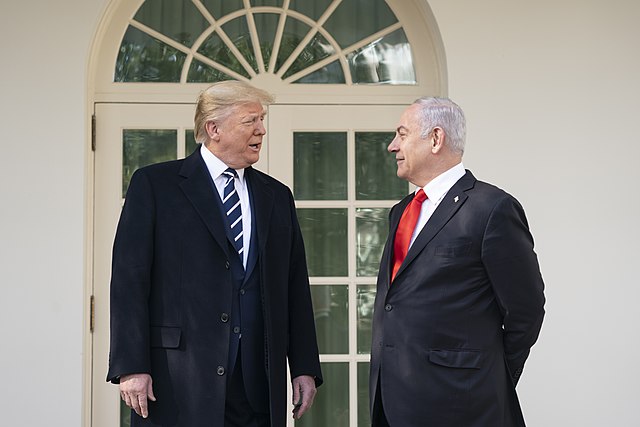 Israeli Prime Minister Benjamin Netanyahu stabbed President Donald Trump in the back on Saturday night by rushing to congratulate Joe Biden after he was prematurely declared president by the media amid a host of recount efforts and legal challenges.

Congratulations @JoeBiden and @KamalaHarris. Joe, we’ve had a long & warm personal relationship for nearly 40 years, and I know you as a great friend of Israel. I look forward to working with both of you to further strengthen the special alliance between the U.S. and Israel.

On Sunday morning, Netanyahu released a video where he congratulated Biden and Harris on their victory and then congratulated Trump for doing a bunch of stuff for Israel.

Prime Minister Benjamin Netanyahu, at the Cabinet meeting:
"I would like to start with congratulations for @JoeBiden and @KamalaHarris. I have a long and warm personal connection with Joe Biden for nearly 40 years, and I know him as a great friend of the State of Israel. pic.twitter.com/S7UDguxWeT

The Jerusalem Post said on Election Day that who wins the presidency “doesn’t matter” because “Washington has Israel’s back.”

Trump or Biden? In the end, it doesn't matter, Washington has Israel's back.

AIPAC rushed to congratulate Biden and Harris for their “election victory” on Saturday.

From The Times of Israel:

“We also congratulate the elected and re-elected senators and representatives — Democrats and Republicans alike — who will be joining an overwhelmingly pro-Israel Congress,” the pro-Israel lobby says.

“Despite the current profound political polarization, there remains a resolute bipartisan commitment to the U.S.-Israel alliance as both presidential tickets took strong pro-Israel positions. Whatever other issues divide us, America stands with Israel.”

Nancy Pelosi told pro-Israel billionaire and top Democratic donor Haim Saban at the 2018 Israeli American Council National Conference that “if this Capitol crumbled to the ground, the one thing that would remain would be our commitment to our aid” to Israel.

Does this quote from Pelosi sound like a declaration of "allegiance" to you? pic.twitter.com/UGF3FZk2eO

There are lessons to be learned here.

Incidentally, while Netanyahu rushed to stab Trump in the back, Mexican President Andres Manuel Lopez Obrador — who was once robbed of an election himself — said Saturday he will not be congratulating either of the US’ presidential “candidates” until all legal issues are resolved and vote tallies are officially certified.