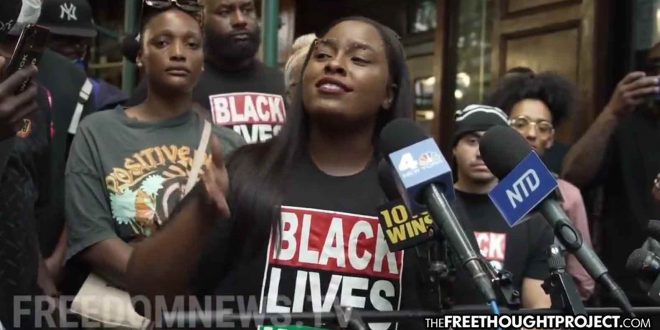 New York, NY — In August, many Americans were shocked as New York City became the first major city in the country to roll out the incredibly fascist vaccine passports for entry into indoor restaurants, bars and gyms. While many fearful Americans applauded the fact that government can take away your right to freely travel by forcing you to take a vaccine, others made sure to stand up against this massive power grab by the state.

The latest group speaking out against the draconian vaccine passports is Black Lives Matter. While this group is usually involved with police brutality protests, they see the problem created by mandates like these that could ultimately end with violent police encounters.

Recently, the co-founder of Black Lives Matter of Greater New York gave a speech at a protest against the mandates.

“We are putting the city on notice. Your mandates will not be another racist social distance,” BLM cofounder Chivona Newsome said. “Black folk are not going to stand by, or you will see another uprising. And that is not a threat, that is a promise.”

“It is our job to defend liberty, and that is what we are here to do!” Newsome added.

“The September 13th vaccine mandate is racist and specifically targets Black New Yorkers. The vaccination passports are modern day Freedom Papers, which limit the free will of Black people”, she stated. “It’s more than where we can dine or enjoy entertainment, it will result in loss of income. As of Monday, September 27, Black health care workers and educators will lose their jobs.”

Newsome said Mayor Bill De Blasio has failed “to protect New York’s most vulnerable” during the pandemic, claiming that the ‘social distancing and mask requirements resulted in Black New Yorkers being brutalized and arrested while their White neighbors received masks and refreshments.”

As we reported last year, Black Americans were some of the hardest hit by police enforcing the arbitrary and tyrannical lockdown mandates. In one instance, 20-year-old Tyreik Bowers watched police raid his home on Memorial day — for barbequing. As Bowers hung out with his family, like millions of other families did that day, plainclothes officers from the 71st Precinct’s anti-crime unit decided to terrorize him over New York’s social distancing guidelines.

Instead of allowing Bowers to clean up outside and comply with their orders, Bowers was tackled and suffered horrific burns as cops held him down on the barbeque pit.

Bowers was just one of many Black New Yorkers brutalized during the lockdowns.

BLM New York has every right to resist these tyrannical mandates as during NYC’s stay-at-home order, Black New Yorkers made up two-thirds of arrests for social distancing. Another 24 percent were Hispanic. Just seven percent of social distancing summonses were made against white people.

“We will not sit by and allow you to use this pandemic, for you to use vaccination cards, for you to use masks as another reason to be racist” BLM Activist Kimberly Bernard, co-founder of Black Women’s March, said at the same protest.

Newsome and others would do well to join the other folks resisting the mandates in New York. As we reported in August, a group of business owners have gone on the offensive against the government’s “arbitrary” and “unscientific” vaccine mandate.

The lawsuit seeks a court order to block de Blasio’s vaccine mandate, calling the requirement “irrational.” Given the recent data to come out about vaccinated individuals both spreading and contracting COVID-19, the lawsuit called into question the efficacy of vaccines saying it is “an uncontested fact that unvaccinated and vaccinated individuals can both contract Covid-19 and the so-called ‘Delta’ variant, further illustrating the arbitrariness of this executive order.”

According to reports on the ground, many businesses have already decided that they will not comply with the mandate and movie theaters, restaurants and other venues have refused to check their customers’ vaccination status before allowing them to enter. There has been no news yet of these businesses refusing to be fined.

This is how real change is brought about. Real change comes not from passive resistance but from good people choosing to disobey bad laws.