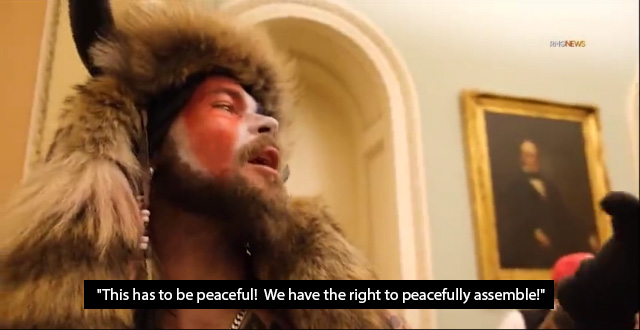 Jacob Chansley, the “Q-Anon Shaman,” was sentenced to 41 months in prison on Wednesday after being maliciously overcharged by the feds with “obstructing an official proceeding of Congress” and accepting a plea deal to avoid being locked up for potentially two decades.

From American Greatness, “Jacob Chansley, the ‘QAnon Shaman,’ Sentenced to 41 Months in Jail”:

D.C. District Court Judge Royce Lamberth today sentenced Jacob Chansley, the so-called “QAnon shaman,” to serve 41 months in prison for his role in the January 6 protest at the Capitol building.

Chansley, 34, pleaded guilty to one count of obstruction of an official proceeding, a felony applied to at least 220 Capitol protester cases. The post-Enron law was not intended to be used against political protesters; this is the first time the U.S. Department of Justice has charged political protesters with the felony count, which is publishable by up to 20 years in prison.

Chansley turned himself in to law enforcement on January 11; he since has spent 317 days in jail, nearly all in solitary confinement. Lamberth twice denied Chansley’s release and again ordered him to remain incarcerated after his September plea agreement.

Joe Biden’s Justice Department accused Chansley—who committed no violent act and has no criminal record—of being a domestic terrorist and recommended a harsh jail sentence to “deter” future domestic terrorists. “The need to deter others especially in cases of domestic terrorism, which the breach of the Capitol certainly was,” assistant U.S. Attorney Kimberly Paschall wrote in the government’s sentencing memo. Biden’s Justice Department set the sentencing range between 41 and 51 months and asked for the maximum prison time.

Paschall admitted in court that Chansely did not destroy any property or assault a police officer but claimed his conduct was “not peaceful.” Contrary to allegations contained in the government’s filings, Chansley walked through an open door on the east side of the building and spoke with Capitol police, who told Chansley and others that “we’re not against . . . you need to show us . . . no attacking, no assault, remain calm.”

Paschall called Chansley’s “vitriolic messages” posted on social media before January 6 “a call to battle.” Pashcall accused Chansley of leaving a “chilling” note to Vice President Mike Pence that warned “justice is coming.” The peaceful transfer of power, Paschall told Lamberth, is “why our government is so strong and so special.”

Chansley’s lawyer, Albert Watkins, repeatedly praised the Justice Department for its handling of the January 6 investigation. Watkins told Lamberth that Chansley has been denied access to family members since January. A court-ordered psychological examination concluded Chansley, an Navy veteran, suffers from personality disorders.

In a heartfelt plea to Lamberth, Chansley asked for mercy, explaining the trauma he endured during 10 months in solitary confinement. He said he suffered from starvation, isolation, and depression that was exacerbated by the death of his grandfather while he was behind bars. “The fact I wasn’t there eats me up every day,” Chansley told Lamberth, a Reagan appointee. Chansley repeatedly admitted his guilt and expressed remorse for what he did. “I was in jail because I committed a crime.”

Lamberth commended Chansley’s remarks—”the most remarkable I’ve ever heard”—but nonetheless sentenced Chansley to 41 months in prison. “What you did was horrific,” Lamberth lectured. Noting Chansley did not attack a police officer, Lamberth told Chansley he “made himself the epitome” of what happened on January 6 and lamented the “serious nature of the crime itself.”

Chansley’s 317 days in jail under pretrial detention orders will apply as time served.

Prosecutors wanted him to be jailed for 51 months in order to “send a message.”

“This has to be peaceful!” Chansley shouted at fellow protesters after walking into the Capitol through a wide open door. “We have the right to peacefully assemble!”

The “epitome” of Jan 6 is a exuberant guy with mental issues who walked into the Capitol, encouraged everyone to be peaceful, said a prayer, wrote a note saying “justice is coming,” then walked out without incident.

While antifa rioters were allowed to wreck havoc in DC during Trump’s inauguration, assault Trump supporters and set fire to cars in the streets and ended up being rewarded for it with the city handing them a $1.6 million settlement, Jan 6 protesters have been locked in solitary confinement, subject to racial abuse and torture at the hands of racist black DC jail guards and prosecuted as domestic terrorists!

This two-tiered “justice” system is what makes “our” government “so special!”