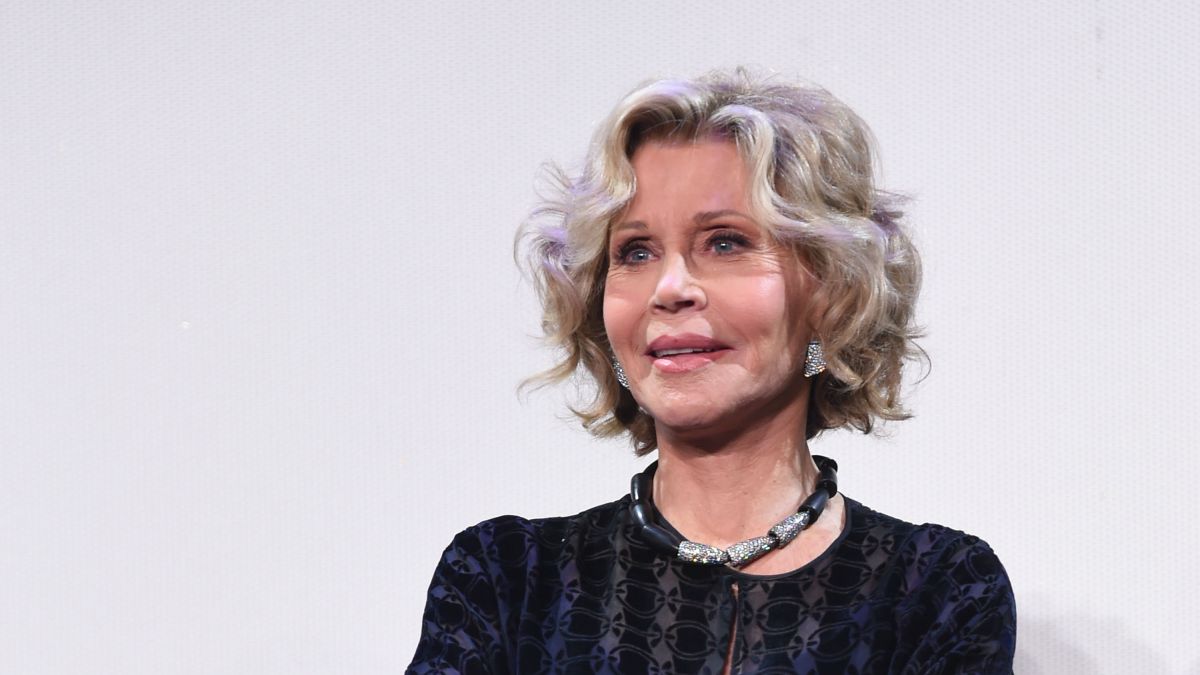 Last year, Jane Fonda sold her “eco-conscious” Beverly Hills mansion, with its 7,102 square feet on a 36,000 square foot lot enclosing a his and her master suite, a glass elevator, 5 bathrooms, glass walls, fireplaces, a fountain, a meditation garden, a fully stocked gym, a pavilion with heat lamps, and a huge pool for $8.5 million after she found no takers at its original $13 million sale price.

“This was the first time in my 79 years,” Fonda enunciates with the deep pathos of an orphan finally getting a full meal as the camera zooms through the cavernous interior of a walk-in closet the size of some people’s homes , “that I have had a closet that you could walk in and see everything you have.”

As Gaia is my witness, If I have to lie, steal, cheat or kill, I’ll never go without a walk-in closet again.

Heartfelt music more appropriate to the reunion of a lost child and her mother plays in the background as the socialist actress describes her “amazing glass elevator, it’s like a gem”. Then she gushes about having a party with 150 people in the house. “We could have had another 50,” she brags. Then there’s her pool. “It’s so beautiful at night when it’s lit up.”

Fonda didn’t sell her mansion because she suddenly realized that two people living on a 36,000 square foot estate was bad for the environment. Even if the pool was solar heated. She had just broken up with her record producer boyfriend and was looking to scale down by getting something for the single life.

And so, the environmentalist activist went all the way down from a 7,102 square foot mansion to a 6,679 square foot luxury townhouse. The $5.8 million three-story home has 4 bedrooms, 7 bathrooms, and a semi-subterranean three car garage which no doubt only stock Teslas. The master suite has its own fireplace, two walk-in closets, a marble bathroom, and its own balcony. There are staff quarters for the servants. And an elevator for a convenient way to get around the three-story condo.

The complex also offers indoor and outdoor swimming pools, and a tennis court. For the environment.

Every so often, Fonda leaves her Century City luxury condo to fly 2,311 miles to Washington D.C. to protest for the environment. Each of these trips by Fonda generates more CO2 than an average person in Madagascar produces in one year. At these ‘Fire Drill Fridays’, she arranges to get herself arrested (with all the CO2 emissions that entails) along with other California celebrities to demand that everyone save the planet by submitting to the poverty, misery, and destruction of the Green New Deal.

But that wouldn’t have gotten the haggard leftist has-been another 15 minutes of fame.

“These are life-and-death decisions,” she falsely claimed before a silent meditation, three “hi-yahs”, and the vanity arrests in a city already overburdened by crime that largely affects its poor population.

Also arrested was Ted Danson, who last year bought a second compound next to his first compound in Santa Monica with a walk-in wine cellar (don’t call it a cave), he already owns a cottage in Nashville, a ten-acre place in California, and a six-acre multi-residence spread on Martha’s Vineyard. The Cheers star and blackface impresario is naturally concerned about the environment. He owns so much of it.

Brooklyn Decker, the Sports Illustrated model, also came to D.C. to fight for the environment. Decker and her husband have two homes, a 7,300 square foot mansion in West Austin, Texason 15 acres of land with an infinity pool, and the other, a 4-acre spread with 7 bedrooms in North Carolina.

Joining them in the Legion of Environmentalist Mansion Crusaders was Rosanna Arquette, an actress who lives in aPacific Palisades 1.36 acre ocean-view walled and gated estate with 7.5 bathrooms, floor-to-ceiling glass walls, and a 10,000-bottle wine cellar with its own tasting room.

“As Greta Thunberg said, ‘Our House Is On Fire’, and we need to act like it,” Fonda wrote.

“You see this coat? I needed something red and I went out and found this coat on sale. This is the last article of clothing that I will ever buy,” she boasted at a Capitol Hill rally while showing off a $500 luxurious red coat. The red coat is appropriate for the nation’s most famous celebrity traitor who flew to show solidarity with the Viet Cong who were murdering Americans with nary a carbon offset in sight.

“‘We don’t need more stuff,’ then I have to walk the walk too. So I’m not buying any more clothes.”

And to prove it, Fonda wore the same black sequin suit to the Glamour Women of the Year Awards in New York City and then to the GCAAP Empower Party in Atlanta three days later. How did she get from New York to Atlanta in three days? Probably teleportation. And buying new clothes in Atlanta would have had less environmental impact than dragging her sequin suit on a flight from New York to Atlanta.

But it’s not about actually making a difference. It’s about pretending to.

You can have your indoor elevators, wine cellars, and massive estates, and look good by getting briefly arrested to show how much you care about the environment, even while heating, cooling, and powering houses and lands that consume more energy and emit more carbon than millions of third worlders.

“Proud of @Janefonda’s commitment to save our planet,” an environmentalist site tweeted.

An actual commitment would have meant moving to a 1,500 square foot apartment. Instead of commuting between California and Washington D.C. (not to mention Atlanta and New York City) while also having a place in D.C. While the media has widely reported on her temporary sojourn in D.C., none have bothered to ask or report on what sort of environmentally sustainable quarters she’s occupying.

“I made personal changes,” Fonda said. “Electric car, get rid of single-use plastic, less meat — cut it out altogether — recycle, all those kinds of things.”

But keep the 6,679 square foot luxury home. And have your luxury coats shipped over from China.

“I decided that the last article of clothing that I will ever buy is a red coat. Sure enough, I found one at Neiman Marcus on sale for $500. And that’s the coat,” she had insisted. “I’m speaking out against consumerism and so I have to walk the talk. And so that’s the last thing I’ll buy.”

By Fonda’s standards, paying only $500 for a coat is a protest against consumerism.

There’s nothing like protesting consumerism by buying a $500 coat “on sale” at Neiman Marcus when you live in California.The coat, worn exclusively by Meghan Markle and working-class comrades of the Viet Cong, normally sells for $750, is virgin wool with lambskin trim and imported from China.

There’s nothing like buying a discounted $500 slave labor coat that had to be shipped all the way over from China to protest consumerism and fight for the environment. This is Fonda’s single greatest moral statement since she sat on a Viet Cong anti-aircraft gun while hanging out with America’s enemies.

China has been known to get its lambskin by skinning lambs alive. And its leather often comes from dogs and cats boiled alive. But it’s not as if Fonda cares about the planet, animals or anyone except herself.

Fonda’s only doing these protests until her Netflix series, Grace and Frankie, starts shooting again. At a protest that came too close to the resumption of shooting on her TV series, she avoided being arrested.

“I have to be careful not to get to a point where they’re going to keep me for 90 days, because I have to begin preparing for Grace and Frankie in January,” the heroic activist explained, after previously saying, “Everybody’s gotta get used to this new normal, getting beyond our comfort zone.”

It’s one thing to get headlines for being arrested. Just so as long as it doesn’t interfere with your closeup and the millions of dollars that allow you to afford the good things in life that you want to take away from the rest of the country. Fonda wants her 7 bathrooms and tiny hovels for the rest of us.

After Fonda returned from collaborating with the enemy in Vietnam, she slandered American POWs as “hypocrites and liars”. But she’s always been the real liar and hypocrite. The pampered celebrity posing with Communist killers and cheering on the murder and torture of American soldiers because it was good for her career. And now championing the Green New Deal while commuting to her massive home, and getting visibly arrested, so long as it doesn’t interfere with her Netflix shooting schedule.

Fonda spoke glowingly of the Communists of Vietnam in propaganda broadcasts. The Green New Deal promises a brutal revolution, with cold and hunger, the breakdown of industry and life, that appeals so much to leftists who believe that people deserve to suffer for social justice. And Jane Fonda hopes to enjoy it from the balcony of her master suite and its fireplace if it gets too cold in Los Angeles County.

Daniel Greenfield is a Shillman Journalism Fellow at the David Horowitz Freedom Center. This article previously appeared at the Center’s Front Page Magazine.
Click here to subscribe to my articles. And click here to support my work with a donation.
Thank you for reading.
(Visited 6 times, 1 visits today)
Share
Tweet
Share
Pin