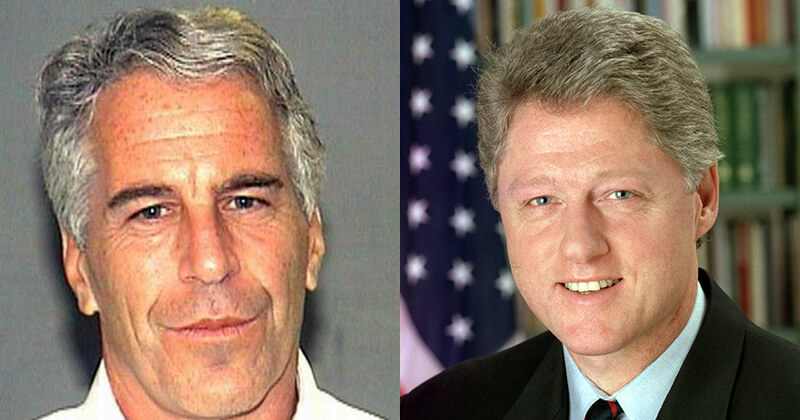 In June of 2018, a man confronted Bill Clinton at a speaking engagement.

Needless to say, soon after, the heckler slowly ushered out of the theater by security who, withal, appeared to keep their cool.

As happy as we may be that Jeffery Epstein may finally feel the long arm of justice, we need to keep in mind that there are others that will escape that arm.

Infowars is reporting that some big name politicians may go down:

House Speaker Nancy Pelosi’s daughter issued a cryptic tweet in reaction to billionaire financier Jeffrey Epstein’s arrest for sex trafficking minors, suggesting that some Republican and Democrat politicians will be implicated in his crimes.

“It is quite likely that some of our faves are implicated but we must follow the facts and let the chips fall where they may – whether on Republicans or Democrats.”

This Epstein case is horrific and the young women deserve justice. It is quite likely that some of our faves are implicated but we must follow the facts and let the chips fall where they may – whether on Republicans or Democrats. #WeSaidEnough #MeToo https://t.co/2mvskwQwW1

These remarks are striking because they’re coming from the daughter of the third most powerful person in the nation.

Additionally, her use of the word “faves” denotes that these politicians are not only likely household names, but also enjoy popularity.

Read the rest at Infowars…

When I heard Epstein was in trouble again I did a couple of fist pumps and got a bit giddy, but it didn’t last.

Maurene Comey, the daughter of former FBI director James Comey, is one of the prosecutors, according to a source with knowledge of the case.

The New York Post reveals that, as usual, Bill and Hillary have found their safety net:

Maurene Comey, daughter of fired FBI Director James Comey, is reportedly one of the prosecutors in the Jeffrey Epstein case.

A source confirmed her involvement with CNN on Sunday.Comey has been serving as an assistant US attorney in the Southern District of New York since 2015. Her father, who was ousted from the FBI two years ago by President Trump, held the same position in the early 2000s.

Comey has worked on a number of cases involving obstruction of justice, racketeering and embezzlement. Legal experts told Law&Crime that Epstein — who is charged in a massive new underage sex trafficking case — could also face money laundering, public corruption and other tax-related crimes on account of the SDNY’s Public Corruption Unit reportedly being involved in the case.

Bill Clinton was one of Epstein’s top clients, but the media protects him and so does the system.

Will we ever see Bill or Hillary go down for any of their crimes?

If you’d like to do some more reading about the Epstein-Clinton connection, here are a couple of old articles to get you started:

Hillary found a way to destroy her own Presidential hopes and blamed everyone but herself.

At any rate, Epstein may be headed back to prison.

He may take down some very important people with him.

But the fix is in, AGAIN, and Bill Clinton won’t be one of them.

The law only applies to the common man and those VIPs who are selected to take a fall to protect their accomplices.