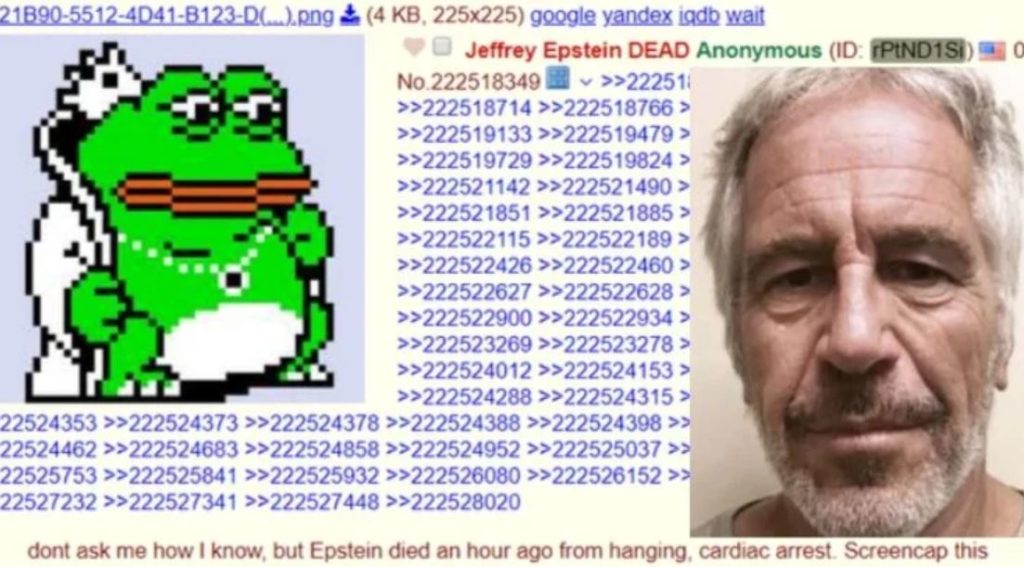 Just under 40 minutes before ABC News reporter Aaron Katersky tweeted the first media announcement of Jeffrey Epstein’s death, someone posted about it on 4chan – saying “[D]ont ask me how I know, but Epstein died an hour ago from hanging, cardiac arrest. Screencap this,” reports BuzzFeed.

Later in the thread, the anonymous user posted: “Was called out as a cardiac arrest at the manhattan federal detention facility. Worked asystole for 40 mins”

“Telemetry implies the paramedics were in contact with a medical control hospital who then gave orders to give Sodium Bicarbonate, bicarb which is designed to reverse the acid buildup in the blood from prolonged cardiac arrest,” according to Dr. Keith Wesley, author of several EMS textbooks and articles.

According to the FDNY’s Frank Dwyer, the fire department says it’s reviewing the incident, but there is no investigation.

Oren Barzilay, the president of the union for EMT workers Local 2507 in New York, said, “our members do not release this type of confidential information, this looks like a 3rd party info.” Barzilay also told BuzzFeed News the union would investigate the potential breach of confidentiality “if such a claim came forward.”

In short, a 4chan user with inside medical information scooped the media.