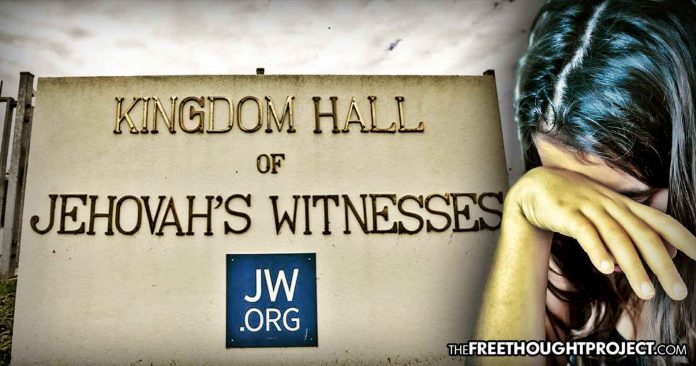 The ultra secretive church, the Jehovah’s Witnesses, have been ordered by a jury to pay $35 million dollars to the survivor of child sexual abuse. The church (better recognized in communities as the ones who always seem to knock on your doors) peddles the writings of the Watchtower Bible and Tract Society of New York. The jury determined the organization ordered Montana church leaders not to report child sexual abuse one of its members perpetrated against one of three young girls.

The church plans to appeal the verdict but the girl, who is now 21-years-old, considers the ruling a powerful victory. Her attorney, Neil Smith, told reporters:

Hopefully that message is loud enough that this will cause the organization to change its priorities in a way that they will begin prioritizing the safety of children so that other children aren’t abused in the future.

Churches, church leaders, counselors, doctors, teachers and others are considered, in most states, “mandatory reporters” and are required by law to inform authorities when and if child abuse of any kind is suspected. Smith’s case against the church contended the church not only failed to report but encouraged other mandatory reporters not to file a police report, and as a result, severely injured his client. The jury agreed, leveling a massive settlement against the church for protecting a pedophile.

The JW’s Office of Public Information at the World Headquarters of Jehova’s Witnesses responded to the verdict with the following statement which reads in part:

The girl was one of three family members who claim to have been abused by the same man. According to the lawsuit, the man was reported to the church and the church responded with explicit instructions not to involve law enforcement. Smith said:

Their national headquarters, called Watchtower, they control when and if anyone within their organization reports child abuse…Watchtower instructed everyone involved that they were not to report the matter to authorities.

In the Montana case, the jury took the victim’s pain and suffering into consideration but also issued punitive damages for the church’s lack of action in protecting its flock of children. According to NBC News, the settlement contained several penalties.

Hopefully, the message sent and the one which will undoubtedly be received by various denominations across the United States will be, ‘if a kid is being sexually assaulted or otherwise abused, everyone involved must immediately inform law enforcement so the child will be protected from the scarring abuses perpetrated against them by their church, its leaders and its members. The identities of child sexual victims, even after they’re no longer children, are protected and names are withheld for reasons of privacy.

In March, a couple of men settled with the Jehovah’s Witnesses for abuse they say they suffered at the hands of church leaders. And in January, an organization calling itself “FaithLeaks” (an apparent spin on Wikileaks) published several internal Jehovah’s Witness church documents detailing allegations and responses to allegations of child sexual abuse. FaithLeaks is determined to shine a light on the church’s continual abuses of children. There are reportedly dozens of cases against the JWs currently working their way through the courts.