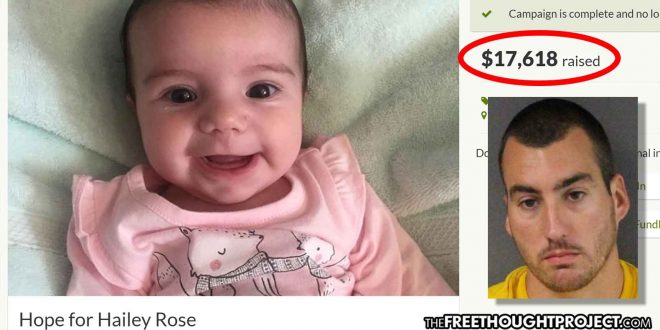 Ewing Township, NJ — This week, 31-year-old Daniel Bannister was arrested for murdering a three-month-old baby girl — his own daughter. While this is horrifying enough, TFTP has learned that after this cop allegedly murdered his own daughter, he used her death to start a GoFundMe page and raised $17,618.

Bannister was arrested on Wednesday and charged with murdering three-month-old Hailey Rose. His wife, Catherine Bannister, 29, was also arrested and charged with second-degree endangering the welfare of a child.

According to prosecutors, Hailey was killed in December after suffering traumatic injuries, inflicted by Bannister. Mercer County Prosecutor Angelo Onofri said in a statement on Wednesday that this was an “ongoing pattern of abuse.”

An investigation was launched in December after an autopsy revealed Hailey’s cause of death was due to blunt impact trauma to her head, including multiple skull fractures and a subdural hemorrhage.

“The nature of Hailey’s injuries indicated an ongoing pattern of abuse,” Onofri said in the statement.

Eventually, Hailey’s death would be ruled a homicide and detectives from Mercer County would launch an investigation into the suspicious nature of her injuries.

Shortly after his daughter’s death in December, Bannister was suspended with pay. During this time, the family setup a GoFundMe that said Hailey had suffered a “catastrophic brain injury.” The campaign raised $17,618 for funeral expenses and medical bills.

The fundraising page, created on Dec. 7 and titled Hope for Hailey Rose, said the girl suffered a catastrophic brain injury on Dec. 5 and was being treated in a pediatric intensive care unit and not expected to recover. The fundraising page said Wednesday the campaign was complete, with over $17,000 raised.

The prosecutor’s office said Wednesday that Ewing’s EMS service responded to the home on Dec. 5 for a report of an unresponsive 3-month-old having difficulty breathing.

EMTs found the baby in cardiac arrest and not breathing, and took her to Capital Health Medical Center – Hopewell, where medical personnel found Hailey suffered a fractured skull, brain bleed, and had multiple fractured ribs, the office said.

Hailey was transferred Robert Wood Johnson Children’s Hospital in New Brunswick, where she died on Dec. 11.

Bannister had been with the Mercer County Police Department since 2017. He and his wife also had a son.

The idea that a police officer would kill a child and then launch a GoFundMe to raise money for it, is horrifying. If all the allegations are true and the officer is convicted, hopefully he receives the maximum sentence.

The same cannot be said about police officers who kill other people’s children.

In December 2017, the Free Thought Project reported on the tragic death of 6-year-old Kameron Prescott whose life was stolen from him when police opened fire on an unarmed woman suspected of stealing a car. That following June, the mother of the little boy who was gunned down by police found out that the cops who killed her son all went back to work. And earlier this year, the family found out that none of the officers responsible for the death of her son will face charges.

Now, a Bexar County grand jury decided that all the officers involved in the boy’s death will face no charges.

“I respect and agree with the decision of the grand jury in this case,” Bexar County District Attorney Joe Gonzales said in an emailed statement Wednesday.

In December, the incident received widespread coverage as the mainstream media reported that Kameron was hit with a “stray bullet.” However, this bullet was anything but “stray.” The shot that killed young Kameron was deliberately fired at an unarmed woman.

For over a year, the family has been asking for justice to be served. And that justice will never come.