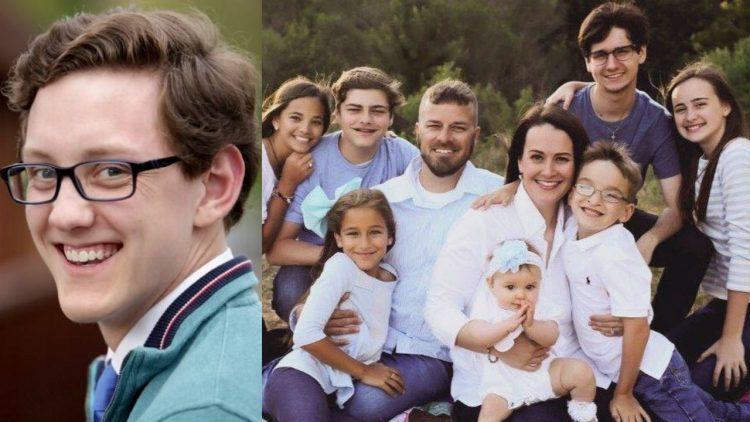 ut the media, lying politicians, Big Pharma, the FDA, the CDC and a host of others tell you these things are “safe and effective.” Liars! Within 24 hours following the experimental Johnson & Johnson COVID injection, a 21-year-old University of Cincinnati student died; and a father of seven got the same injection and suffered a stroke and has been left paralyzed

Mr. John Francis Foley was a National Honor Society pre-med student at the University of Cincinnati. He made the Dean’s List every semester and volunteered for several organizations in his free time.

But he never woke up.

Young Mr. Foley died peacefully in his sleep that night, according to his mother, Mary Beth Foley. 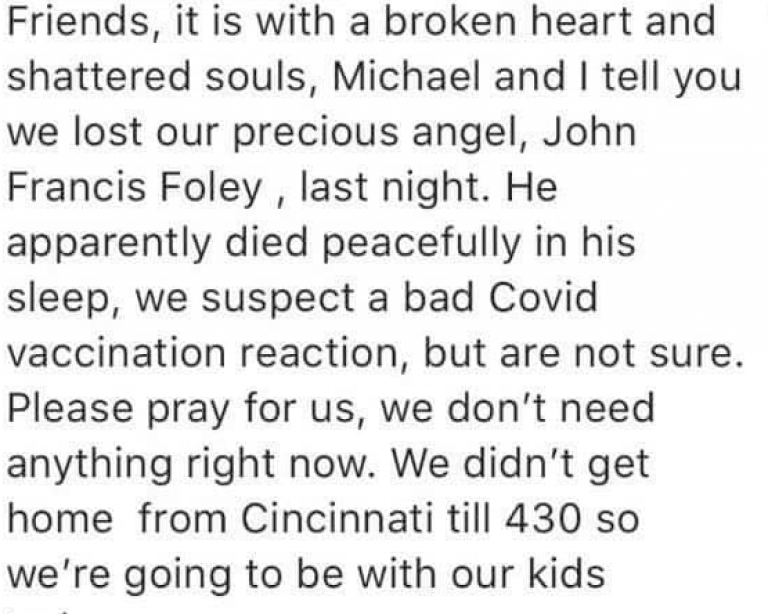 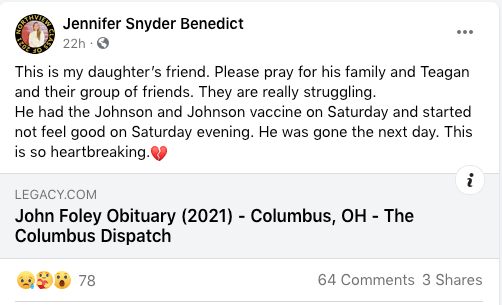 Additionally, WLOX reported on the father of seven in Mississippi.

When the news broke about the pause of the Johnson & Johnson vaccine Tuesday, one Coast family was already living with a tragedy they believe was caused by the vaccine.

It started out as a normal day for 43-year-old Brad Malagarie of St. Martin. This busy father of seven spent the morning at his D’Iberville office before heading to get a Johnson & Johnson vaccine a little after noon.

He returned to work, and within three hours coworkers noticed he was unresponsive at his desk.

“They called me and said he had that vaccine and something is wrong, we think it’s a stroke,” said Celeste Foster O’Keefe, Malagarie’s aunt.

Malagarie was rushed to the hospital and diagnosed with a stroke. A blood clot had lodged in his left middle cerebral artery. O’Keefe, who is also Brad’s boss, said the family believes without a doubt that the vaccine caused the stroke.

“He’s a young, healthy 43-year-old, and I immediately thought it, and I said be sure to tell the doctors he took that J & J vaccine and that, to me, is what caused his stroke,” she said.

O’Keefe said her nephew’s only health issue before the vaccine was high blood pressure, which was controlled with medication.

Now, one week after the vaccine, he’s in critical but stable condition at Ochsner’s Medical Center in New Orleans, his wife Cori by his side. Their families’ lives changed tragically overnight.

“He can’t talk now and he can’t walk. He’s paralyzed on the right side. He knows who we are and he will just cry when he sees us,” O’Keefe said.

Doctors don’t know Malagarie’s prognosis for recovery yet but said it will likely take at least a year of rehab after he leaves the hospital.

I am very sad to learn of both of these incidents, but my goodness, when are people going to wise up to what is going on? The mainstream media is complicit in this genocide by not reporting what is actually taking place with the numbers of deaths and adverse effects from these injections.

TRENDING: Texas Governor: “The Problem Is Not Guns, It’s Hearts Without God”

At least for now there is a halt to the J&J shot, but don’t count on it lasting.

U.S. vaccine experts have identified three potential options for Johnson & Johnson’s COVID-19 vaccine in the U.S. going forward. But while they wait for more data, the shot’s nationwide pause will continue.

Moving forward, the United States could continue the vaccine’s use with a safety warning, or it could put age and gender restrictions on the product. Officials could also discontinue use of the shot entirely, experts at the CDC’s Advisory Committee on Immunization Practices said during a Wednesday meeting.

For now, though, the group has decided to punt on any decisions and collect more data. The group plans to meet in about a week for a new session.

This signals that the shot’s pause will extend longer than indicated by the FDA on Tuesday, when acting commissioner Janet Woodcock said she expected it to last a “matter of days.”

With Pfizer and Moderna supplying a combined 14 million vaccine doses weekly to the U.S., there is less urgency to solve the safety issue of J&J shot, Sara Oliver of the CDC said on Wednesday.

The Wednesday meeting came after U.S. officials on Tuesday recommended a pause to the shot’s rollout after rare but serious blood clots in six people after vaccination. One died and one was in critical condition, officials said Tuesday. About 7 million people had been vaccinated before the pause.

Of the six CVST cases in the U.S., all have been white women between the ages of 18 and 48. The clots have occurred between 6 and 13 days after vaccinations. More cases could surface because around half of the J&J doses administered were in the last two weeks, officials said.

Finally, keep in mind that J&J is the same company that knowingly put asbestos in their baby powder and sold it as safe and effective too, but ended up paying billions in damages due to cancers and other problems that were the result of their knowingly putting a known carcinogen in their product. They should never have been allowed to remain in business. Now, many more people are dead or harmed by using their products.