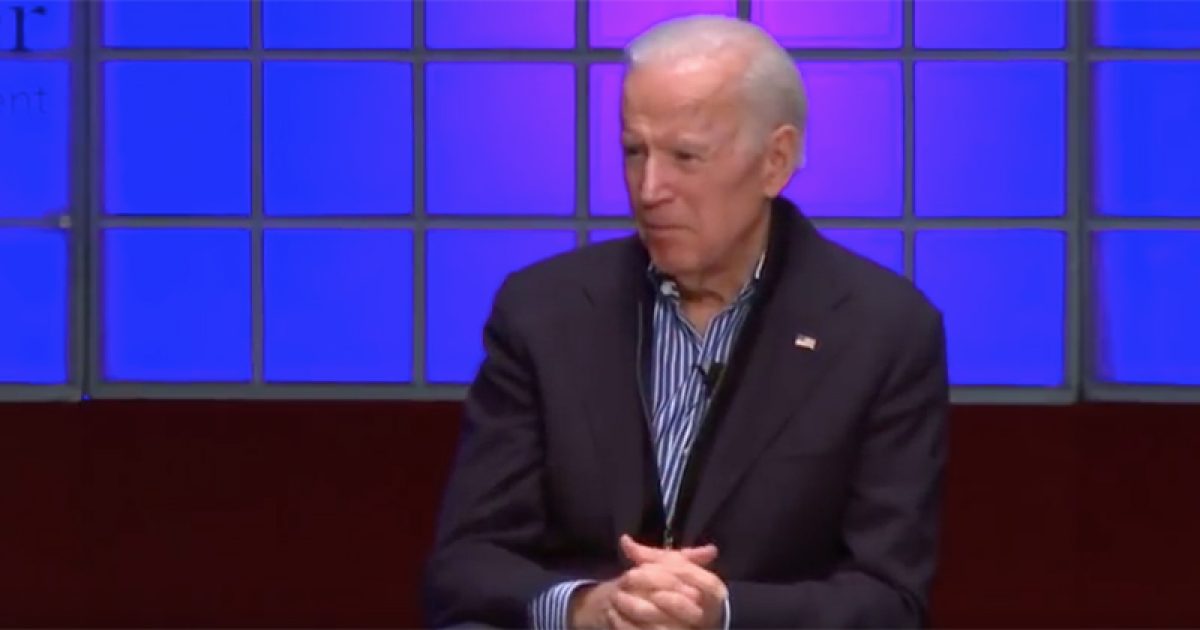 Joe “they gonna put y’all back in chains” Biden decided to celebrate the legacy of civil rights by spewing racist nonsense at an event put on by a hate group.

Former Vice President Joe Biden, speaking at a breakfast Monday morning in Washington honoring Martin Luther King Jr., said that white Americans need to acknowledge and admit the fact that systemic racism still exists and must be rooted out.

“The bottom line is we have a lot to root out, but most of all the systematic racism that most of us whites don’t like to acknowledge even exists,” Biden said at an event hosted by the Rev. Al Sharpton and the National Action Network. “We don’t even consciously acknowledge it. But it’s been built into every aspect of our system.”

His administration gave a black racist hate group a pass on voter intimidation. It encouraged and promoted race riots that trashed cities like Baltimore. It blatantly intervened in local investigations and politics for racial reasons.

But there’s Biden lecturing “most of us whites” on racism at a hate group.

Five young Latino women were among the seven victims of a fire. They were in their late teens and early twenties. They were mothers and daughters. One had two young boys at home. She might have been watching them get married today. Another helped support her mother.

Sharpton had vowed, “We will not stand by and allow them to move this brother so that some white interloper can expand his business”. And he and his National Action Network were true to their word.

Powell had escaped in the seventies from a mental hospital after he had attacked a police officer with a lead pipe while shouting, “I am going to kill you, pig.” In the eighties he had been on trial for breaking a Korean woman’s head during another protest.

And Powell defended the killer as “A Black Man who struggled for his people to be free.”

This is what Joe Biden is okay with. Just like his old boss was.

Imagine if MSNBC gave a TV show to a violent racist who led angry mobs against Jewish and Asian communities and businesses. Mobs that gathered outside a Jewish synagogue chanting “Heil Hitler” and “Death to the Jews.”

But there can be no talk of Sharpton without discussing the trail of debris behind him. Yankel Rosenbaum, the University of Melbourne student, stabbed and beaten to death on President Street among the stately manors of what was once known as Doctor’s Row, was the most famous victim of Sharpton’s Crown Height Pogrom, but not the only one.

There was Anthony Graziosi, a white, bearded Italian electronics salesman wearing a dark suit, who was mistaken for a Jew, and died for it. Bracha Estrin, a Holocaust survivor, who saw the mobs chanting “Heil Hitler” and “Death to the Jews” and believing that history was about to repeat itself, jumped rather than fall into their hands.

Twenty years ago this August, a line of bodies was lowered into the ground. And Sharpton walked away with a higher national profile than ever. Three years later, another round of racist protests at Freddy’s Fashion Mart with protesters screaming, “Burn down this Jew store!” led to an attack that killed seven minority employees.

This is the ugly racism that Joe Biden consorts with while lecturing Americans on how racist they are.